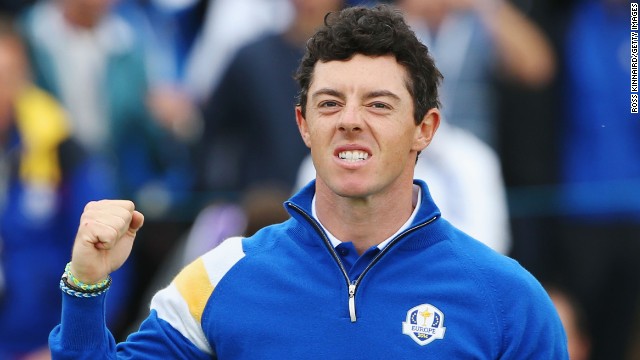 Rory McIlroy has enjoyed a triumphant season on both the European and PGA Tours.
STORY HIGHLIGHTS

(CNN) -- Rory McIlroy was confirmed as winner of the Race to Dubai Sunday despite not lifting a club in anger for six weeks.

Victory for American Brooks Koepka in the Turkish Airlines Open -- at the expense of McIlroy's nearest challengers Marcel Siem, Jamie Donaldson and Sergio Garcia -- left the Northern Irishman with an unassailable lead ahead of the DP World Tour Championships in Dubai later this week.

It is the second time in three years that McIlroy has ended the season as European number one, having claimed two major titles and a lucrative World Golf Championship event.

But eyebrows were raised when the 25-year-old McIlroy said he would sit out the WGC-HSBC Champions and BMW Masters tournaments in China to prepare for a court battle against his former management company.

With such a big lead after his earlier triumphs, the world number one judged he afford to miss out on more big pay days, his last appearance on the European Tour coming with a second place at the Alfred Dunhill Links Championship in the first week of October.

Germany's Siem, who won the BMW Masters event, made a brave attempt to win in Turkey to keep the race alive.

Massive congrats to my good buddy @BKoepka on the win in Turkey! Very well deserved, enjoy the celebrations!

He started the final round Sunday just a shot off the lead, but could only card a closing 71 to finish tied eighth, with Donaldson 19th and Garcia 25th.

Koepka, who lives in Florida, clinched his first European Tour victory with a superb closing 65 on the Montgomerie Maxx Royal course at Antalya to finish 17 under par.

It left him a shot clear of England's Ian Poulter, who was left to rue a missed six-foot birdie putt on the 18th to force a playoff.

Read: 'Up for it' Rory thrilled by European Ryder win

Henrik Stenson of Sweden finished third to move into second in the Race to Dubai standings, but 2,726,514 points behind McIlroy, with 1,666,600 on offer to the winner in Dubai next Sunday.

Is Rory the new Tiger?

McIlroy will go in search of a search of a second win in three years at Jumeirah Golf Estates, delighted to have wrapped up the Harry Vardon Trophy, awarded to the player who finishes the season as Europe's top player.

"This has obviously been the best season of my career by a long way, and to win the Race to Dubai for the second time really is something truly special," he told the official European Tour website.

"That four-week spell over the summer, from the British Open to the US PGA Championship, would have to be the best golf of my life, so I feel like I've really earned the Race to Dubai."

The top 60 players in the Race to Dubai after this week's tournament, with Koepka up to sixth, will play in the $8 million end of season finale.