Superyachts show off their best sides in drone movies

Welcome to the glamorous life of the sailing drone operator.

Justice L Bentz, 26, lives in Antigua and shoots video profiles of some of the world's most expensive private yachts.

Not a bad life. But it does come at the cost of wearing a black bag on your head. 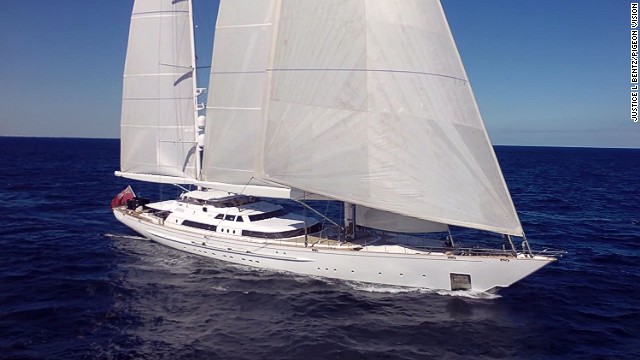 This shot of a superyacht was captured using the latest in drone technology -- which have developed considerably in the past decade. 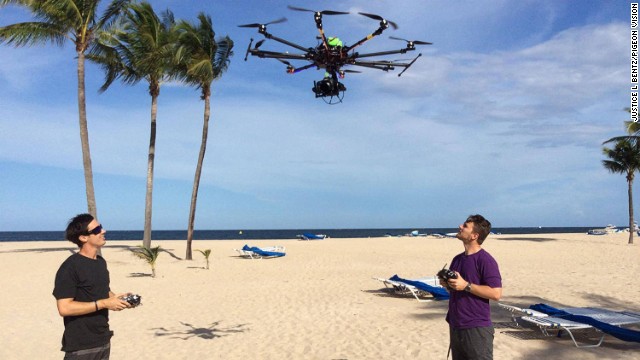 Justice L Bentz (left) and a fellow operator get one of their custom-built drones off the ground, ready to shoot another superyacht in the Caribbean. 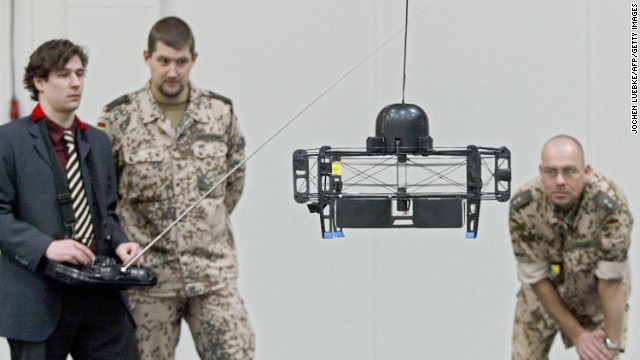 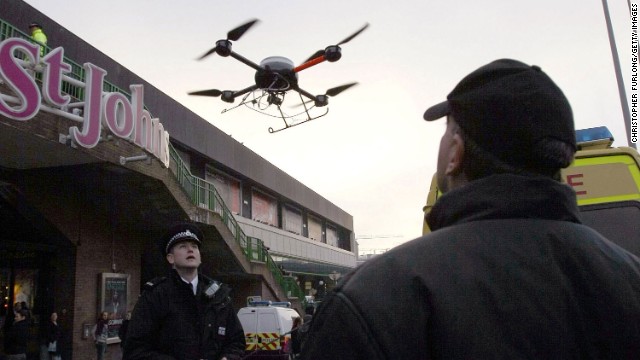 Most early drones had military or police uses. In 2007, British police in Liverpool used this drone to capture the anti-social behavior of festive revellers during the holiday season. 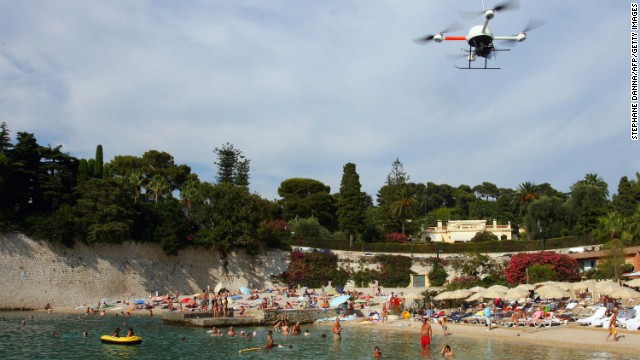 This drone, hovering above a beach in southern France in 2009, carried a thermal-imaging camera -- designed to let scientists check levels of pollution in the sea. 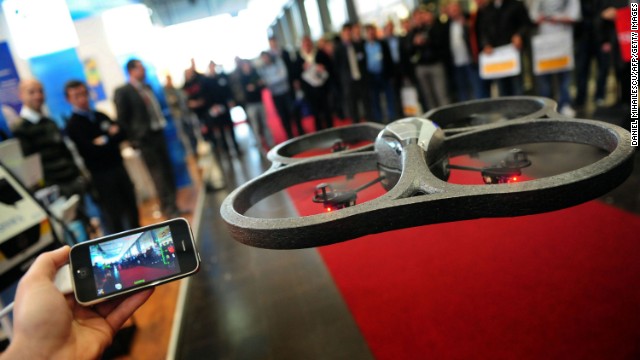 By 2010, drones being exhibited at major high-tech conventions included the ability to monitor the camera's output wirelessly -- and in real-time -- using cellphones. 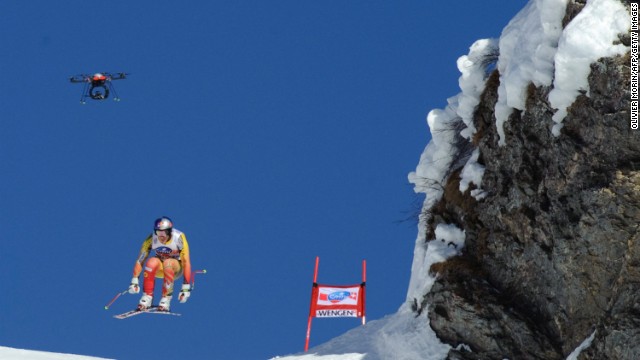 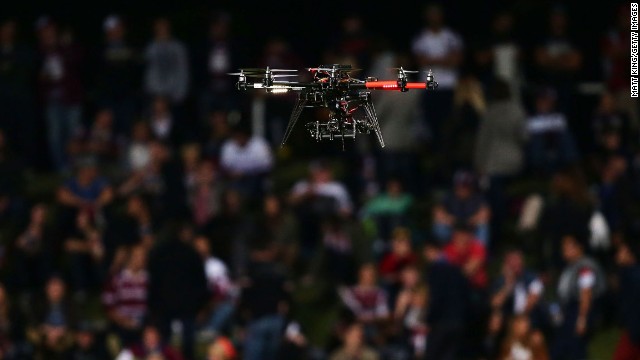 A year later, this drone is seen hovering above the field during a National Rugby League game between Australian sides Manly Warringah Sea Eagles and the Sydney Roosters. 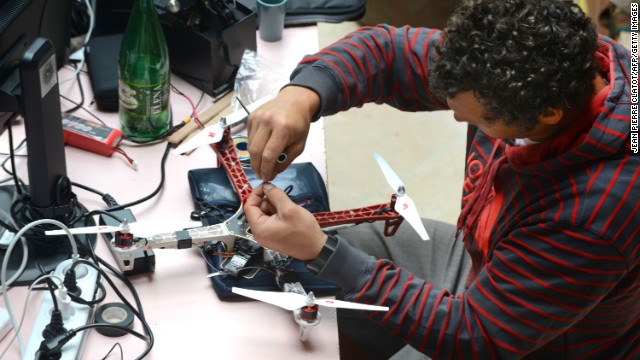 Increasingly, pro athletes are using drones for their own benefit. French snowboarder Xavier de le Rue is pictured working on a drone prototype in the summer of 2014. 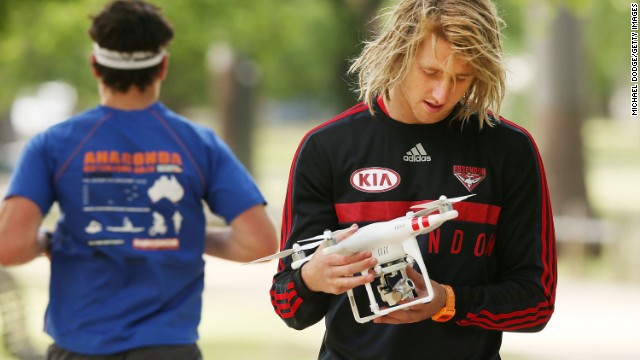 Drones are a part of training sessions now, too. Aussie Rules player Dyson Heppell babysits one while training with the AFL's Essendon Bombers in November 2014. 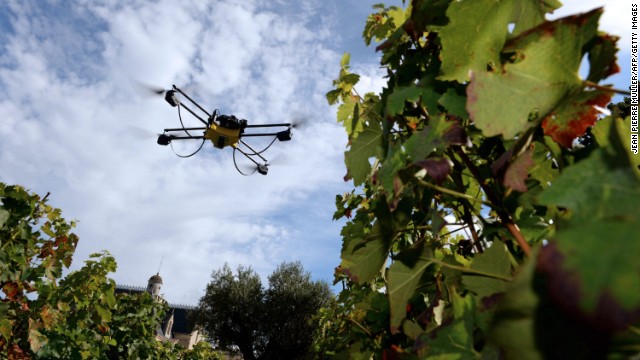 "Sometimes, I fly the drone with my head in a trash bag so I don't get salt spray from the sea on my equipment," Bentz explains.

"I'm inside the bag, looking at my monitor and basically playing a video game -- watching that screen and securing myself so I don't get thrown around. We go out in the craziest conditions, and the Caribbean winds are really strong."

If Bentz isn't the most appealing sight, out on deck in a black bag, his footage is a different story.

Drones have revolutionized what is possible with a camera, but rarely does the end product match this vista of superyachts and Caribbean seas.

"It's just a perspective you never really see," says Bentz. "You can either charter a helicopter to come out for an hour for a thousand euros, or I can come out.

"How much do I cost? It really depends on what you want. In some cases, it's more. But I can get shots and angles a normal helicopter can't get.

Bentz began flying drones as a hobby, then developed a passion for yachts when he spent two years working on board the 88m-long Maltese Falcon, one of the largest private yachts in the world.

A long road to Olympic glory

All of the technology he uses is custom-built, based on skills he picked up following in his brother's footsteps as a child.

Older brother Tyler was one of the early pro video gamers, picking up awards -- and tens of thousands of dollars -- as a professional Quake 3 player at the turn of the millennium.

He now works with Alan Karol, a 31-year-old Polish cinematographer, on larger projects -- of which there are many in a Caribbean racing season teeming with stunning yachts and proud owners.

"People spend this crazy amount of money to have everyone come and race in St Barts or Antigua," says Bentz, "so they want something everyone can relate to and enjoy having."

Drones are not limited to the rarefied air of the superyacht club.

Some of the world's leading sailing organizations have been experimenting with similar technology in the hope of transforming the way the sport is shown on TV.

"If we don't have a TV viewer-ready product, where does that put us in our livelihoods here? We've got to get on board," says Ben Remocker, who works with the 49er sailing class.

Remocker has been at the forefront of plans to launch a new "theater-style" version of sailing, which sees races take place along short, compact courses -- making the action much easier to shoot, and simpler to show on TV.

He argues that's vital for the sport's future, in a world where Olympic sports are judged on their ability to captivate a global audience.

"We've used drones quite a bit," says Remocker. "One of the limitations is the range but, if we have a shorter course and only a 10-minute race, it's pretty doable now for a drone to stay in the air for that.

"We can film an entire race cheaply and simply, and you get great perspective."

Rune Neumann piloted the drones at this year's 49er class junior world championships. He argues this line of work is an art form, about more than simply putting a camera in the air.

The return of a sailing icon

"Everybody can film from above, but I want pictures from places where it's not normally possible to take them," says Neumann.

"To get the drone out in front of the boat by one or two meters, that's the difficult part. It's as difficult to get the shot as it is with a normal camera, there are so many variables. I'm not always happy about my work -- sometimes you get it, sometimes you don't.

"My advantage is I've been a pro sailor and sailed a lot of different boats. So 99 times out of 100, I know what the sailor is going to do. I can place my drone in the right spot because I can predict what will happen."

There is one obvious danger when you have thousands of dollars in equipment in mid-air, hovering above the ocean between fast-moving boats.

"I've been close sometimes," laughs Neumann, when asked how often drones have ditched in the sea or collided with vessels.

"I made an agreement with myself that if I lose one every year, it's OK.

"I've seen some of the other guys and they're hanging 30m away and don't want to get too close, because it's dangerous. But you have to get close, otherwise you can't get those pictures."

Remocker's recent efforts to convince sailing's main governing body, ISAF, to adopt his new, TV-friendly theater-style format have failed. At a conference in early November, the organization's top executives voted down the plans.

That leaves him frustrated, but determined to convince the powers-that-be that this way of capturing his sport is the future.

"I think it's a hugely wasted opportunity. If it's not this, it's got to be something else. The way sailing's going, we're on a tough road," he says.

Meanwhile, Bentz is pressing on with new tricks in a world he says is always changing.

"It's cheaper because a quadcopter has four motors, whereas an airplane only has one, and it can fly longer. Battery life is a big issue right now. With an airplane you can kill the motors, glide and hang out for a long time.

"Every couple weeks, there's stuff that's coming out. There's a really good community called DIY Drones and that's like my bible, pretty much.

"Custom-building is where it's at. I customize everything, it's all completely ripped apart and put back together. But there are off-the-shelf solutions.

"It depends on how perfect you want it to be."