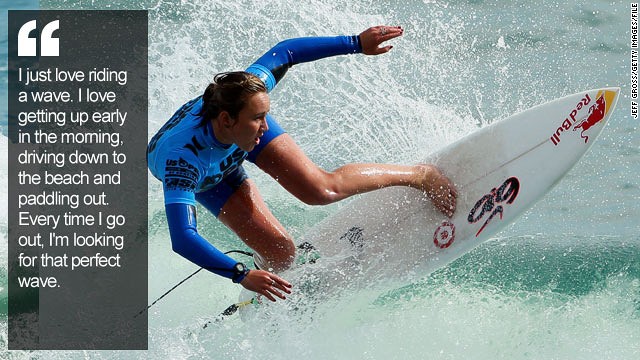 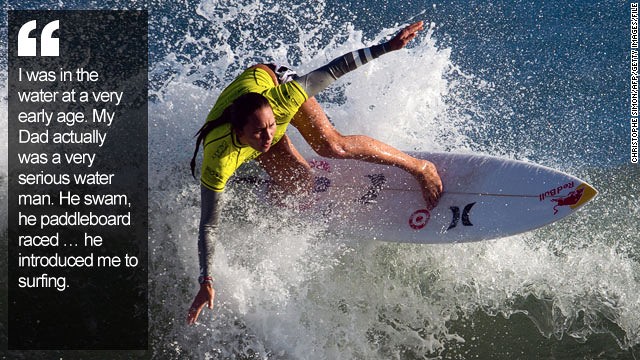 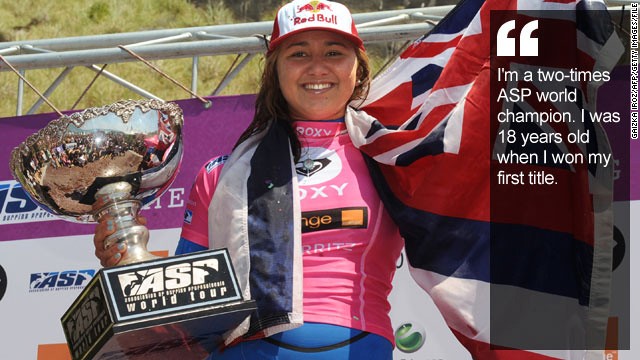 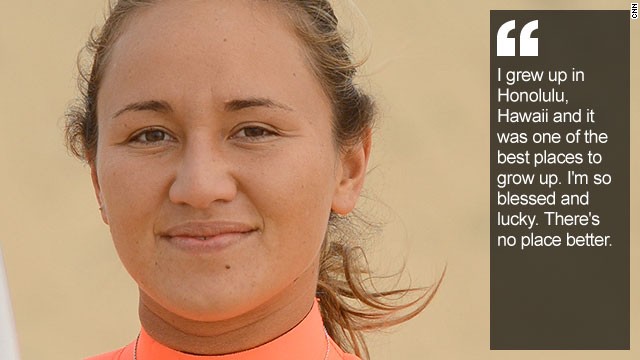 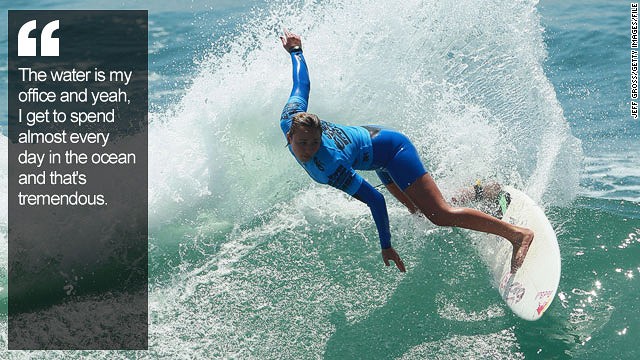 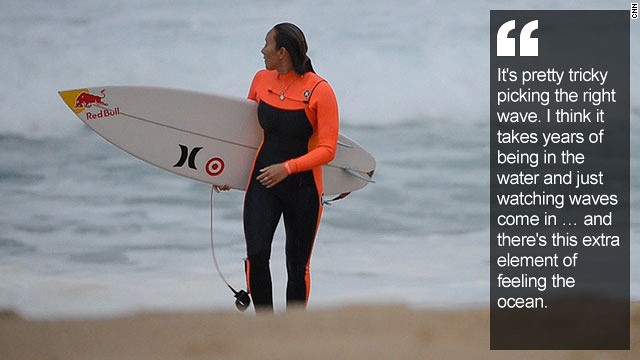 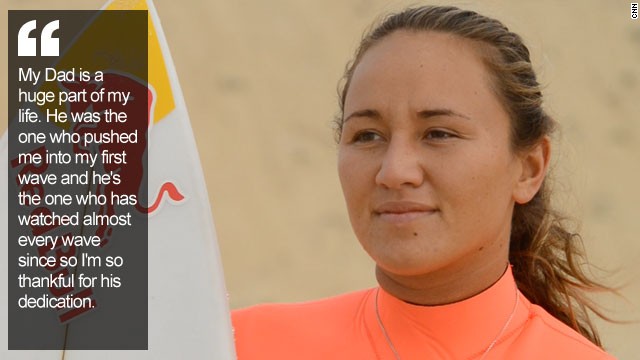 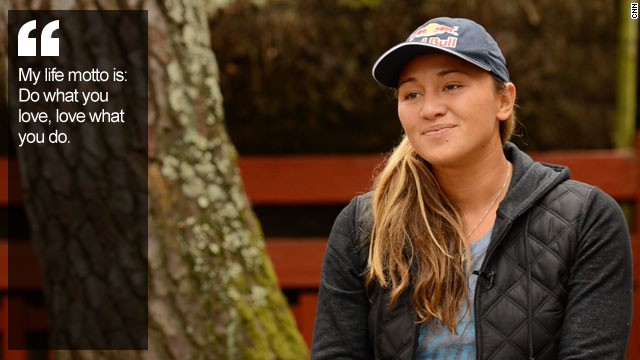 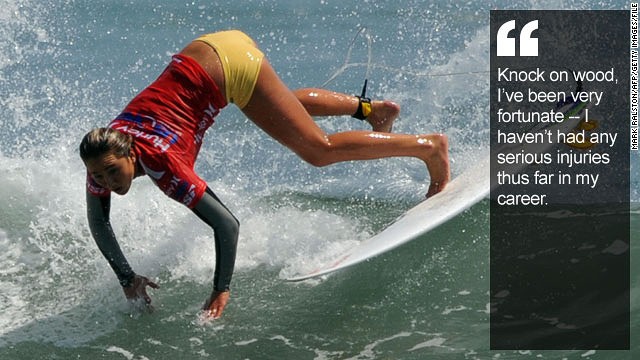 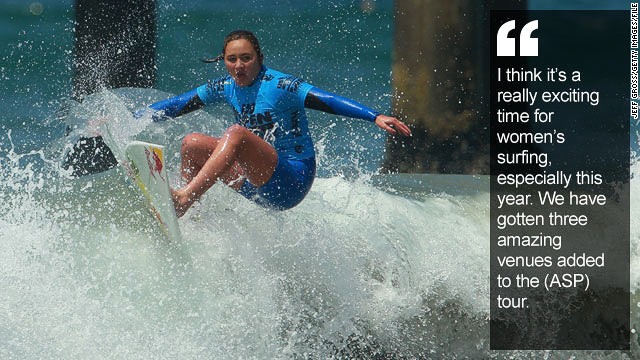 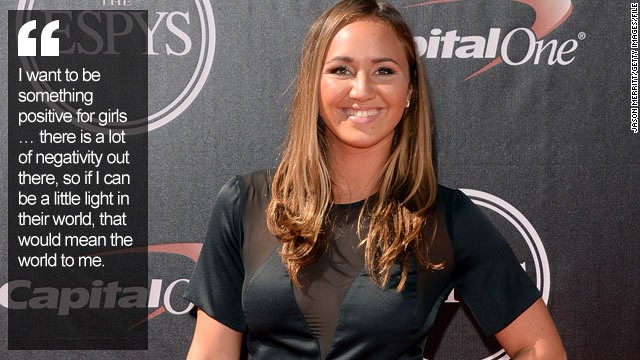 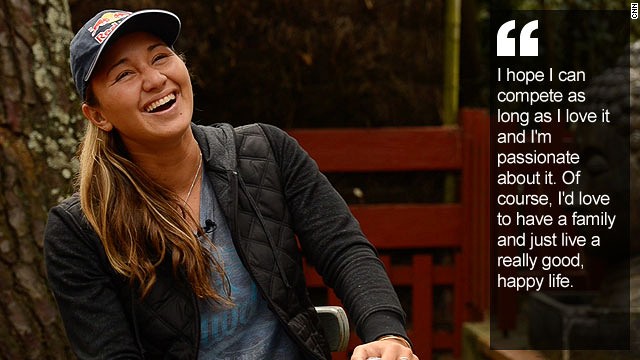 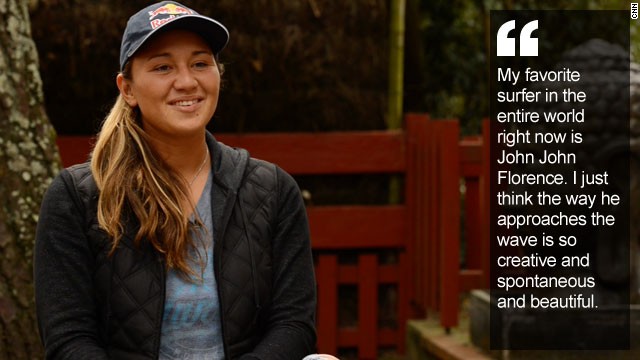 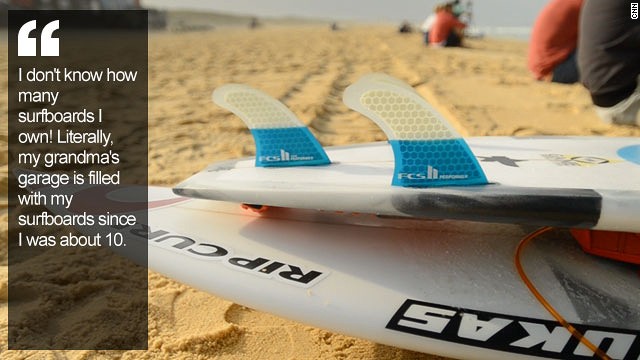 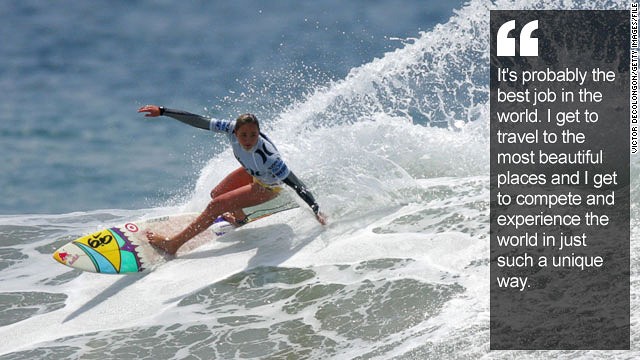 (CNN) -- For the millions of us who sit at desks all day, Carissa Moore's description of her workplace might sound a little cruel.

"The water is my office and yeah, I get to spend almost every day in the ocean, and that's tremendous," Moore told CNN's Human to Hero series.

A place that conjures up an image of air-conditioned confinement to most means nothing but fresh air and freedom to the Hawaiian surfer.

"I just love riding a wave. I love getting up early in the morning and driving down to the beach and paddling out and every time I go out, I'm looking for that perfect wave," she explains.

"When you're out there and you find that one that you want to go for, it's just like everything else in the world disappears.

"It's just you and the ocean and just spontaneity and an expression of yourself. There's not really any thinking involved, it's just doing."

Admittedly, it may not be the most original statement ever uttered by a surfer, but Moore's career so far has been anything but derivative.

Carving up the field

The 22-year-old has taken the surfing world by storm in recent years, winning the women's world championship twice in the last four seasons.

Her first world crown was not only a personal triumph but a significant landmark for the sport as she clinched the title at the age of 18 to become the youngest-ever female world champion.

"My first world title in 2011 was a dream come true. I mean, I dreamed of it my entire life and so for it to finally pay off was the best thing ever," she says.

"I never really thought of myself being the youngest person. I still don't. I really don't look back and think, 'Oh! that was such an accomplishment!' I think it was more just like, 'Yeah, I won a world title and that really meant something.'

In a way it was nothing more than surfing aficionados had expected given her incredible progression as a junior.

Moore was born in Honolulu, on Hawaii's third biggest island, Oahu -- home to some of the world's most hallowed surf.

"Not only are the people so sweet, amazing and welcoming -- there's so much "aloha" -- but the waves are perfect for growing up as a surfer," she says.

Oahu's 110 miles of coastline is dotted with spectacular surfing spots from the vertiginous waves of Waimea Bay on the north shore to Waikiki Beach.

It was here, in the more benign waters in the south of the island, that Moore's father introduced her to the sport.

"My dad actually was a very serious water man. He swam, he paddleboard raced, he did all sorts of things in the water," she says.

"He was the first one who introduced me to surfing and pushed me into my first wave when I was about four or five years old at Waikiki Beach. It wasn't too serious in the beginning -- it was just us enjoying the ocean together."

By the time she was 10, Moore was an experienced competitor and already dreaming big.

"I remember telling my dad: 'Hey, you know, I think I want to be the best that I can be in this sport. I want to see how far I can go,'" she recalls.

In 2004, aged 11, Moore won the first of a record 11 national titles in events organized by the National Scholastic Surfing Association, the premier amateur circuit in the U.S.

It was form that she carried into the professional ranks in 2010 when she finished third in her first full season on the Association of Surfing Professionals (ASP) women's world championship tour, earning her the Rookie of the Year award.

A year later she made history, winning the women's world tour before a second title followed in 2013 as she won half of the season's eight events.

Success isn't just down to what you do on the board, you also need to pick your waves with care.

"It definitely takes years of being in the water. Sometimes when you're sitting out in the ocean, you may not see a wave coming in, you just feel it and you move in the right direction and seconds later, there's the wave.

"A good wave is one that has a nice wall (that) will allow for multiple turns and has a nice steepness to it. It's tricky to describe."

Moore's surfing style has led to comparisons with her male counterparts and on occasions she has been granted entry to men's events. In 2011, she was the first woman to be offered a wild card entry to the men's Triple Crown of Surfing in Hawaii.

Holy cow!! Check out this turn of little cmoore👍👍😀 http://t.co/zAk6yJajkg via @youtube

"She's definitely one of the girls who can show technique and form and power like some of the men," says her coach Shane Beschen.

Moore's efforts on the water have earned her a slew of sponsorship deals and have arguably helped raise not only the profile but profitability of female surfers.

This season, the women's tour has been extended from eight to 10 events with prize money for each leg doubling to $250,000, with the winner taking home $60,000.

"I think it's a really exciting time for women's surfing," she says.

"We have gotten three amazing venues added to the tour (Fiji, Lower Trestles, California and Honolulu Bay in Maui.)

"All three events are very high performance with more powerful, challenging waves that we haven't had on tour before. So that's a huge step up for us."

Unbelievably, it wasn't so long ago that the men would get first pick of the waves.

"There was inequality in who got to surf or pick the better waves where there were joint events. This year we've had our fair share of really, really good days."

A third world title may be all but out of reach this year -- Moore currently lies fourth behind leader and five-time world champion Stephanie Gilmore of Australia -- but she's guaranteed a hero's welcome at the season finale on home surf in Maui later this month.

Despite an increasingly busy schedule and rising recognition inside and outside her sport -- she was named one of Glamour magazine's Women of the Year in 2013 and inducted into the Surfers' Hall of Fame earlier this year -- Moore retains an "aloha" attitude to life both on and off the board.

"I hope for the next 10 years I'm still doing what I love. I hope to keep competing as long as I love it and I'm passionate about it," she says.

"Of course, I'd love to have a family and just live a really good, happy life and keep it simple. It's not all about surfing, it's about a journey, it's about life. There's so much more than just winning a contest."