(CNN) -- There are 5 1/2 feet of snow outside and on top of Chrissy Hazard's home in the Buffalo suburb of Cheektowaga, New York. A treadmill and table prop up a door felled by the snow's attempted push into the home.

But everything's all right for now, she told CNN's "Anderson Cooper 360."

"We're good. We're buried in the house but we're doing OK," she said.

Hazard is stuck inside the home with her husband, a friend, seven children and some dogs. It may be three or four days before they can get out, she said. There is a small patch of yard that offers the pups a chance to go outside. 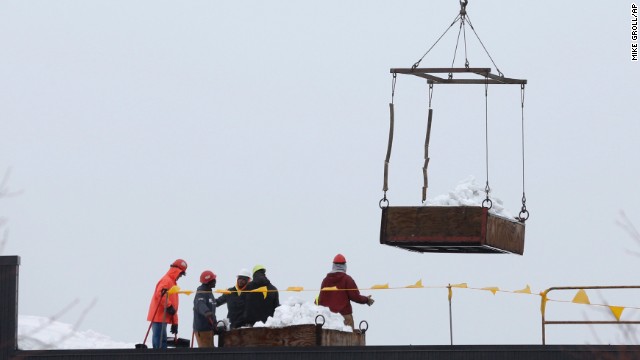 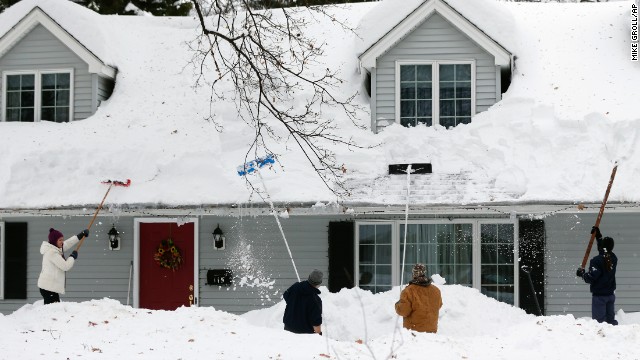 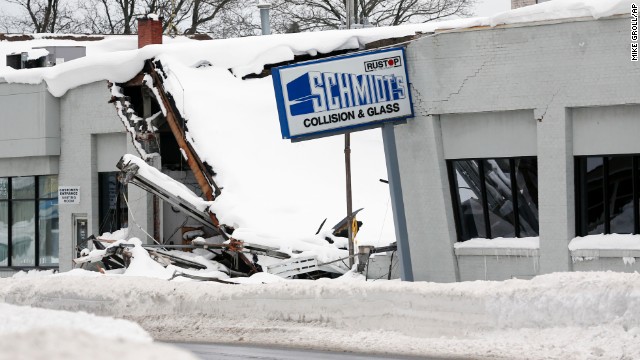 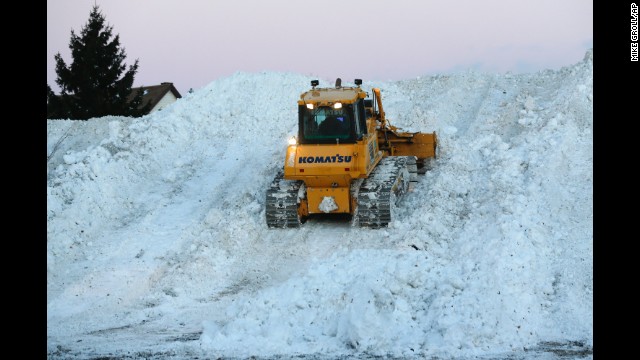 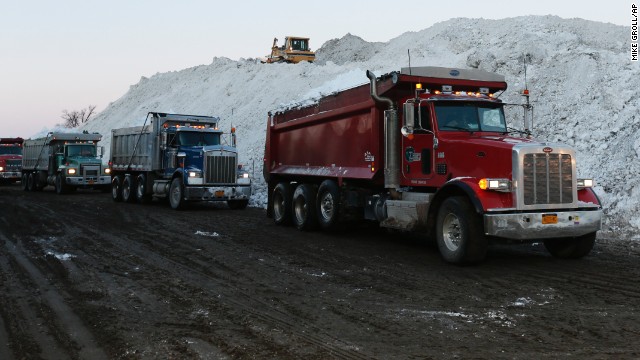 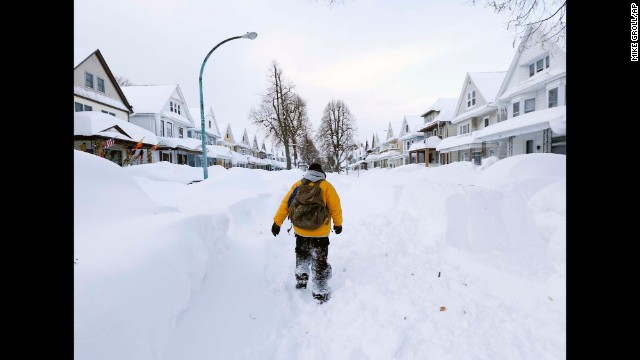 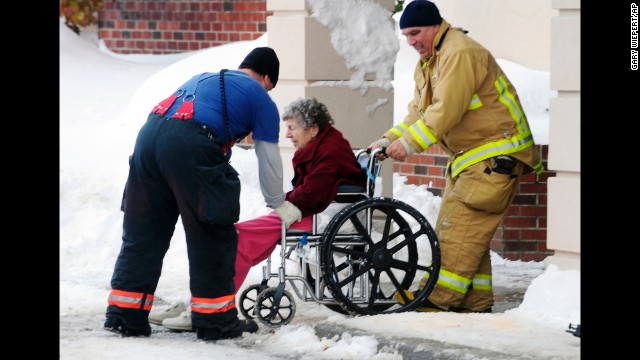 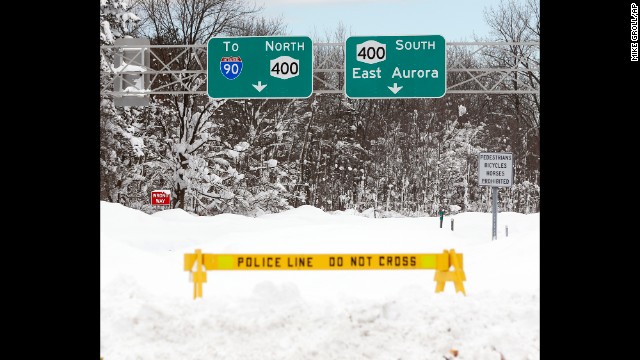 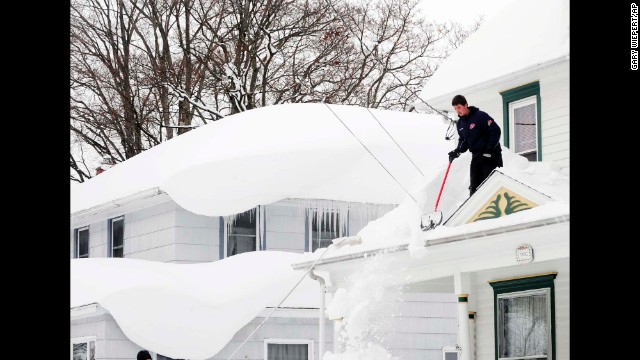 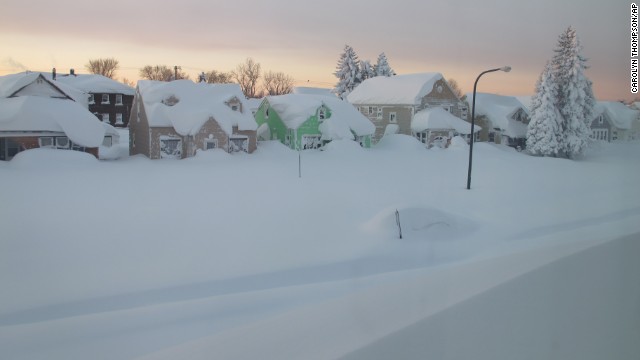 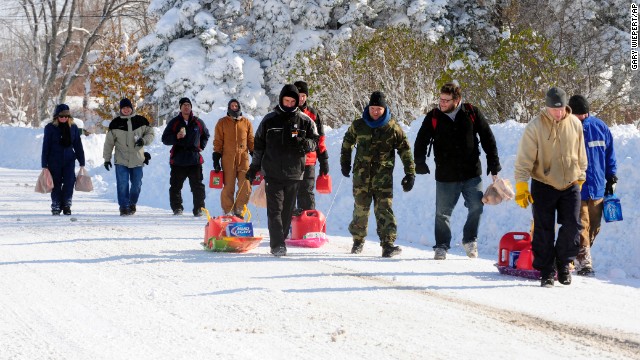 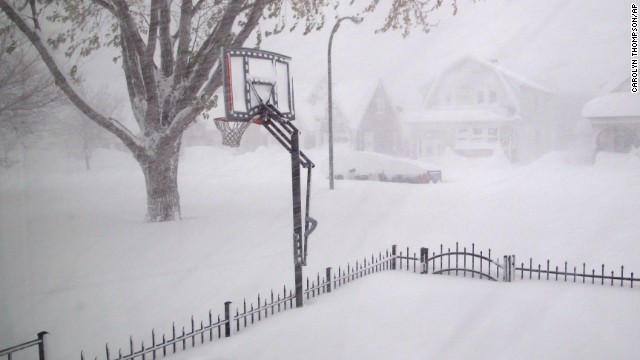 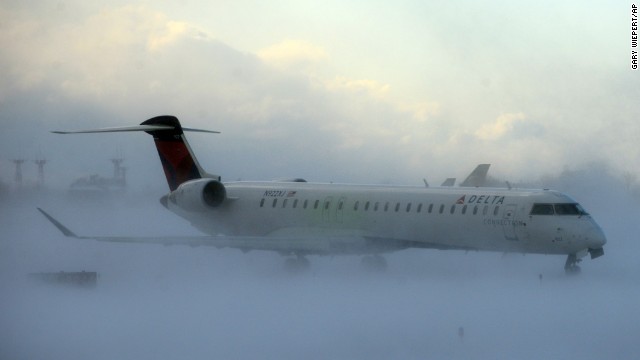 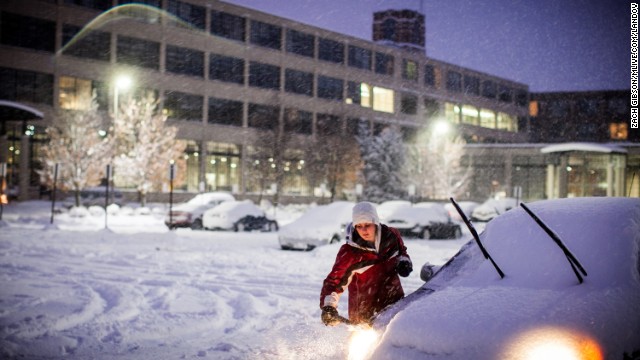 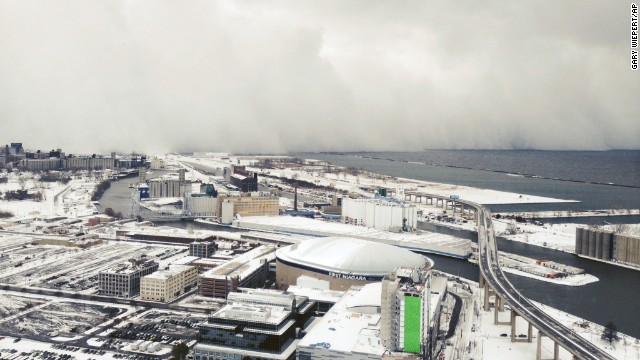 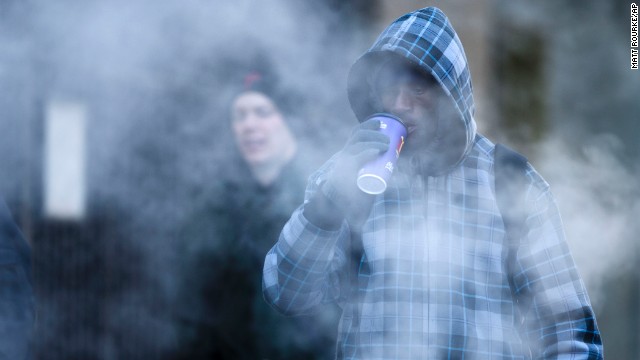 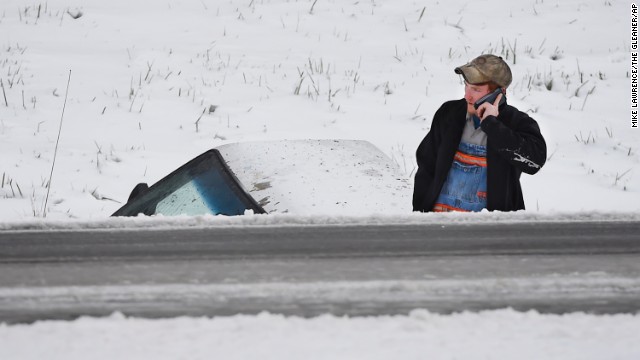 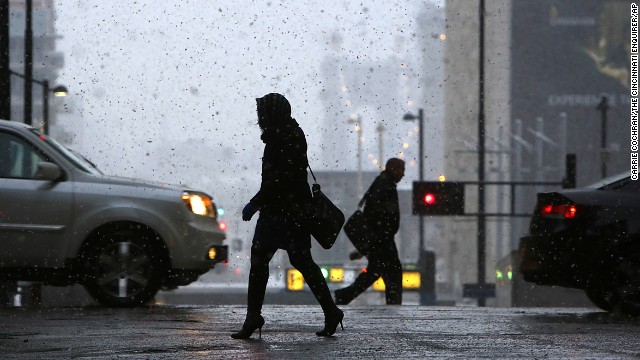 Nearly a year's worth of snow in 24 hours

And there's more wintery precipitation on the way after a respite Wednesday.

CNN Severe Weather Expert Chad Myers said that 20 to 30 more inches of snow will fall Thursday during a 10-hour window.

There is so much snow, Buffalo officials aren't even plowing. Instead hundreds of dump trucks venture out to haul snow away from the 10 square miles that have been pummeled by the lake-effect snow. Other areas of New York's second-most populous city only received 1 to 6 inches, officials said.

Seven deaths in the region -- including one man whose car was buried under more than a foot of snow -- are blamed on the extreme storm, authorities said.

Firefighters came to check on the Hazard family on Tuesday as many emergency workers put in double shifts and got little sleep.

Stories about acts of bravery and kindness were emerging even as the snow was piling up and up in the city on Lake Erie.

Buffalo Mayor Byron Brown and city officials Wednesday recounted stories of rescuers trudging around snow drifts as high as houses to get people to hospitals, of fire stations turned into temporary shelters and police officers delivering special baby formula to a pair of infants.

"It is clear that we are one Buffalo," Brown said.

Buffalo prides itself as "The City of Good Neighbors."

"Buffalo itself, known as a city of neighbors, has come together and shown a real sense of community and neighbor helping neighbor, which is always good to see," New York Gov. Andrew Cuomo told reporters.

Snow across the land

About 50% of the United States had snow on the ground Tuesday, according to the National Weather Service.

There were also forecasts for heavy snow for counties in Michigan and Vermont.

All 50 states registered temperatures below freezing Tuesday morning, even traditionally warm ones. Temperatures at Mauna Kea on Hawaii's Big Island dipped to 31 degrees while Florida's Panhandle was in the upper 20s, with freeze warnings in effect.

The cause of this mayhem: Arctic air pouring over the relatively warm waters of the Great Lakes is producing extreme lake-effect snows.

Unheard of amounts of snow

Buffalo Niagara International Airport, about a 20-minute drive from downtown, was operating Wednesday afternoon but many people were having trouble navigating the snow-covered streets to get to the airport. Most airlines canceled some flights, according to airline representatives and airport spokesman C. Douglas Hartmayer.

"This storm is basically a knife that went right through the heart of Erie County," said Mark Poloncarz, Erie County executive. "I can't remember and I don't think anyone else can remember this much snow falling in this short a period."

Mayor Brown and other western New York officials said the cost of cleaning up after this week's storm will be significant, requiring the city and neighboring municipalities to seek assistance from the state and the Federal Emergency Management Agency.

Buffalo State Assemblyman Sean Ryan Wednesday said the area may get "more snowfall this week than the rest of the whole winter combined," wiping out entire storm budgets in one event.

Wednesday night's football game between the State University of New York, Buffalo and Kent State was postponed because of travel issues.

The Buffalo Bills, who play the New York Jets on Sunday at 1 p.m. ET, are seeking the public's help to clear an estimated 220,000 tons of snow from Ralph Wilson Stadium, the team announced on its website. The helpers will be paid $10 an hour, plus game tickets if they work a certain number of hours.

The team said the NFL would decide if the game should be rescheduled. Temperatures are expected to break through freezing on Saturday and reach the 50s on Sunday, the National Weather Service said. But rain is also likely.

"That would be a terrible thing," Myers said. "If it rains -- and it probably will at least on the weekend -- all of that snow is not going to melt right away. That snow is going to hold that rain in and then that snow on top is going to get heavier and heavier."

This is only the area's first snowfall of the winter, but South Buffalo has seen almost as much snow in 24 hours as it experiences in an entire season. About 84 inches is normal, but about 6 feet -- 72 inches -- has fallen since Tuesday.

Brown predicted a "long way to go" before efforts to clear Buffalo's roadways are finished. Already, more than 6,500 tons of snow have been removed from city streets and highways.

"It is going to be a slow go," the mayor said. "Historic amounts of snow have fallen. There is no place to put that snow."

A driving ban remains in effect in South Buffalo, with rescuers using snowmobiles to respond to emergency calls.

Emboldened by Wednesday's sunshine many people headed out onto the streets only to find themselves stranded. Authorities received 12 calls from people stuck in the snow.

Thankfully, there were relatively few power outages in and near Buffalo, where 72 customers didn't have electricity Wednesday night, New York State Electric and Gas Corp. reported.

Second round of arctic air is coming

Of the seven deaths blamed on the storm, six were in Erie County and one in Genesee County.

Erie County officials said one of the deaths was from a car accident and three other people died due to cardiac issues that resulted from shoveling snow.

In Alden, New York, a 46-year-old man was found dead inside a car buried in 12 to 15 feet of snow, authorities said.

In Genesee County, Jack Boyce, a 56-year-old county employee, died after collapsing Tuesday morning while operating a snow blower outside the county sheriff's office, according to county manager Jay Gsell.

"He had an exacerbation of his condition where he needed emergency medical care and he was unable to be transported to a care facility that had the highest level of care," she said, adding that the patient died at an "urgent care center."

Trapped at the fire station

The snow left people stranded in cars and turned roadways into parking lots. It also forced residents to seek shelter in unusual places.

About 70 people took refuge at a Buffalo fire station and 20 others holed up in a police station Tuesday night, authorities said. By morning, most had returned home.

And as they waited, those at the fire station got a teeny weeny gift.

A baby girl was delivered there when an ambulance was unable to take her mother to the hospital, Buffalo Fire Commissioner Garnell Whitfield said.

"She was born, she's safe and she's healthy," Whitfield said.