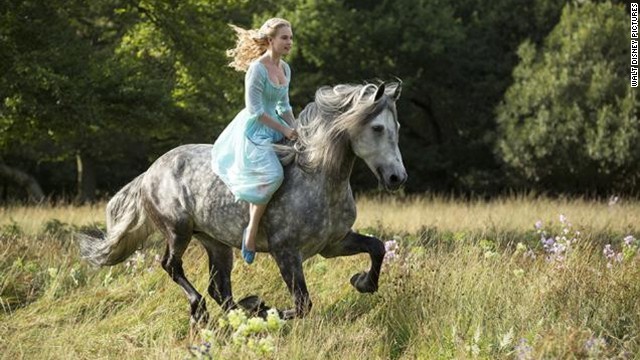 (CNN) -- The trailer for 2015's "Cinderella" doesn't feature any singing mice, but it's magical all the same.

Disney has released its first look at next year's live-action re-telling of "Cinderella," which stars Lily James, of "Downton Abbey," as the unfairly treated princess-to-be.

This version keeps all the memorable moments of Cinderella's story intact -- she's still left at the mercy of a vindictive stepmother, and still has to bail from that royal ball by the stroke of midnight -- but it also fills in some of the gaps in our understanding of how Cinderella came to be.

Instead of picking up with Cinderella already slaving away, we get to meet her parents, as played by Hayley Atwell and Ben Chaplin, and we learn that the moniker "Cinderella" is a cruel twist on her name, Ella.

This time around, Cinderella meets her Prince Charming (Richard Madden) in the woods before encountering him again at his royal soiree.

And while her Fairy Godmother (Helena Bonham-Carter) still drums up a pair of glass slippers faster than you can say "Bibbidi-Bobbidi-Boo," we're now assured that the shoes are far more comfortable than they look.

The new "Cinderella" arrives close to the 65th anniversary of Walt Disney's classic animated version. That "Cinderella" first opened in the United States on February 15, 1950, after spending six years in development. The result proved so popular that Disney offered occasional re-releases of the film, not to mention that the fairy tale has spawned a near sub-genre of Cinderella-inspired movies. (Hilary Duff's "A Cinderella Story," anyone?)