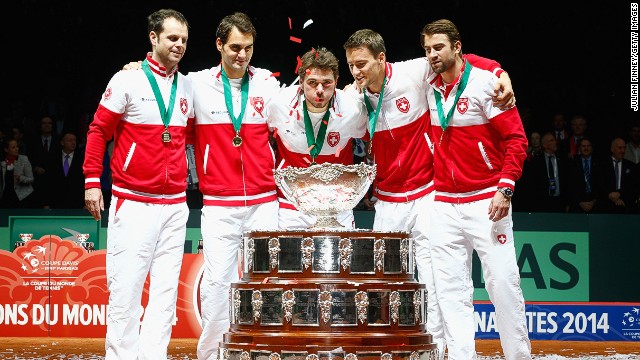 Switzerland got their hands on the Davis Cup for the first time thanks to the efforts of top-10 tennis stars Roger Federer (second left) and Stanislas Wawrinka (center). 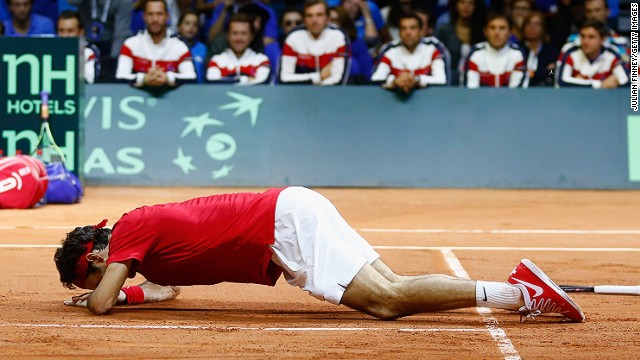 What did the victory mean for Federer? It literally brought the 33-year-old to his knees. 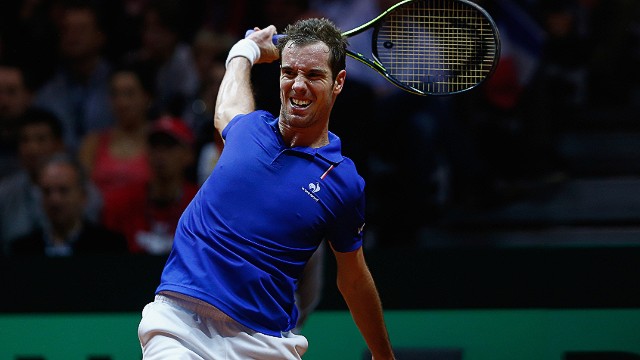 Frenchman Richard Gasquet was no match for Federer in the fourth rubber. The Swiss world No.2 beat him 6-4 6-2 6-2 to seal victory for Switzerland. 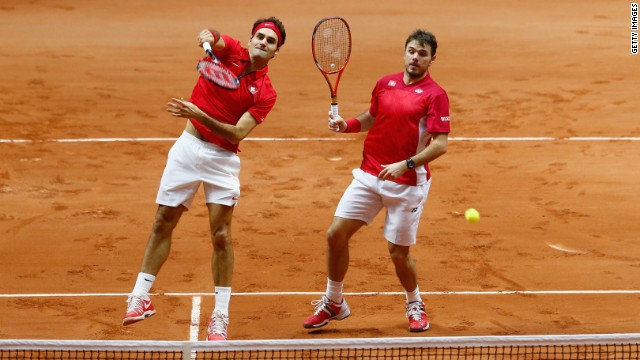 Federer and Wawrinka won their doubles match Saturday to come within one rubber of a historic first for Switzerland. 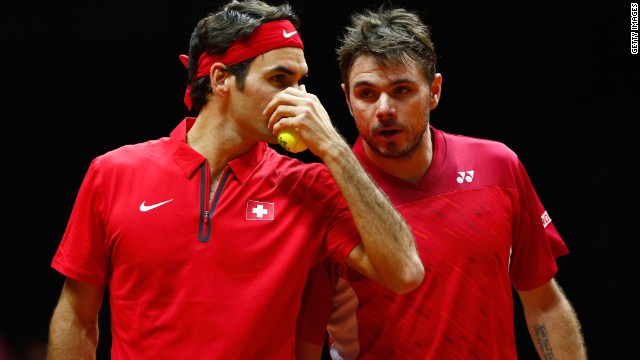 The Swiss pair talk tactics during their doubles match against France's Gasquet and Julien Benneteau. 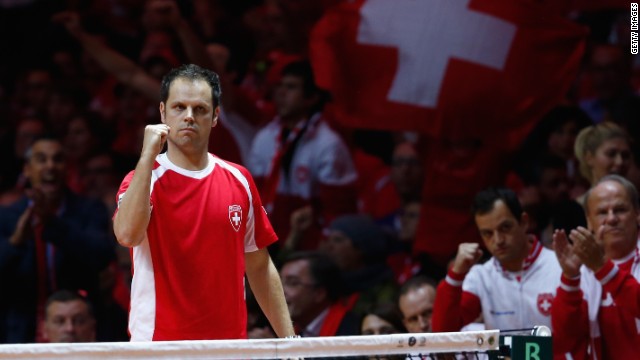 The Swiss team watched from the sidelines as Federer and Wawrinka wrapped up a 6-3, 7-5, 6-4 win. 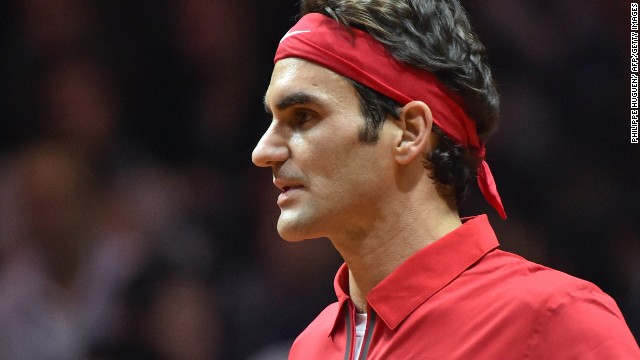 The tournament had not started well for Federer, who slipped to a straight sets defeat in his opening singles rubber against Gael Monfils in Lille. 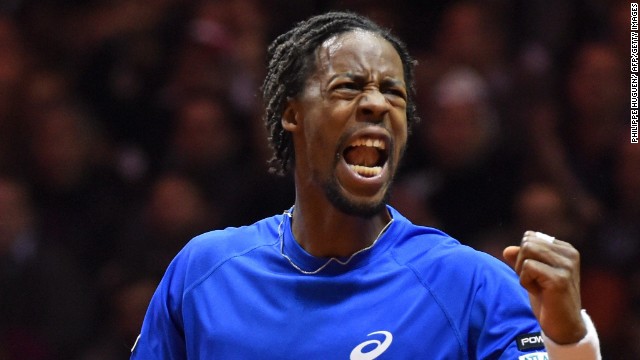 Monfils was in inspired form to draw France level in the Davis Cup final by beating Federer. 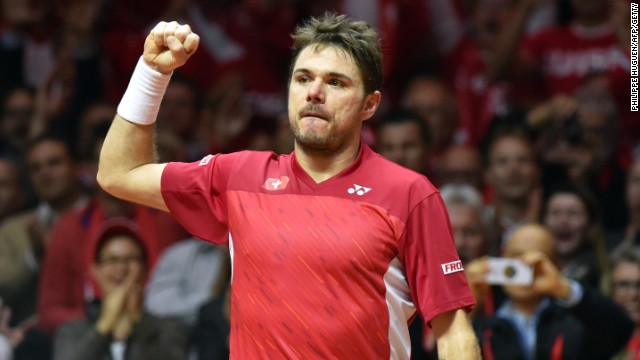 Australian Open champion Wawrinka had put up a superb performance against Jo-Wilfried Tsonga to put the Swiss 1-0 up in Lille. 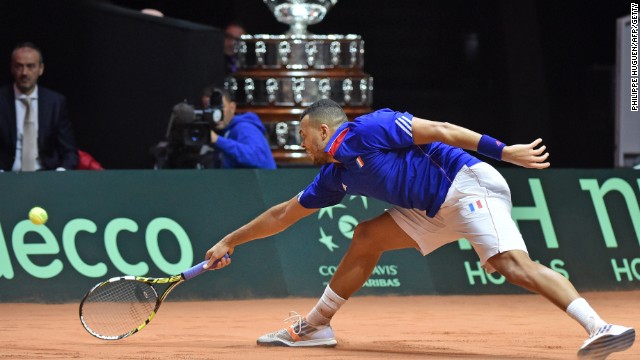 With the giant Davis Cup trophy behind him, Tsonga stretches to retrieve a shot in going down to Wawrinka 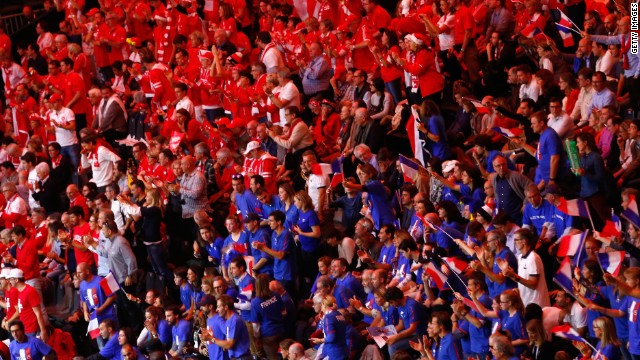 The Stade Pierre Mauroy in Lille was packed to the rafters with a record crowd for the Davis Cup Final between hosts France and Switzerland. 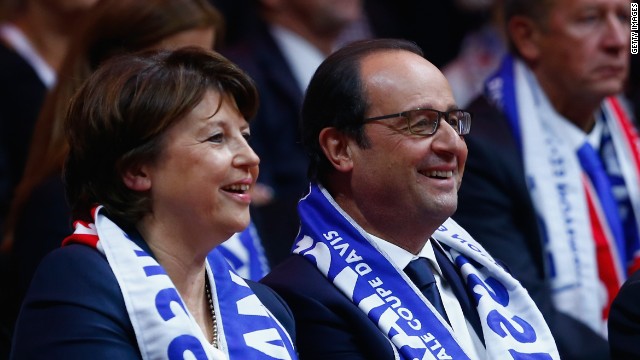 Lille (CNN) -- A year that began in uncertainty for Roger Federer ended with a historic title for the 17-time grand slam champion and his country.

When Federer defeated Richard Gasquet of France 6-4 6-2 6-2 in front of another record crowd Sunday, it gave Federer a maiden Davis Cup title at the not so tender age of 33. The visitors prevailed 3-1 in the best-of-five match series.

Switzerland had never before won team tennis' most prestigious event, playing in one previous final in 1992 when Federer was merely 11.

"For me personally, obviously I'm unbelievably happy because I've been playing in this competition for probably almost 15 years now," Federer told reporters as he sat among his teammates. "At the end of the day I wanted it more for the guys.

"This is one for the boys."

With Federer committing to every round of the Davis Cup this season -- unlike in years past -- and the emergence of compatriot Stan Wawrinka, it greatly boosted Switzerland's chances of success.

A guide to Davis Cup tennis

Superfan's love for the Davis Cup

Federer thus concluded 2014 with one of the biggest titles to elude him and a ranking of No. 2, a considerable achievement given back issues largely contributed to his ranking slipping to eighth in January.

Indeed, some wondered -- with justification -- if Federer could ever come close to recapturing his old form.

He did, and Federer was sharp Saturday in doubles alongside Wawrinka and then dominant against Gasquet in Lille, northern France.

Only one week ago Federer was, according to Novak Djokovic, a "question mark" for the Davis Cup final after he withdrew from the final of the World Tour Finals in London against the No. 1 with further back troubles.

His name was included in the Davis Cup draw Thursday, ensuring one of the highest profile finals in recent memory, but Federer suffered his most lopsided loss in the competition Friday against Gael Monfils.

The positive, he insisted afterwards, was that his body felt fine as the match progressed, and his words ultimately were not a smoke screen.

To say that Federer toyed with Gasquet wouldn't be much of a stretch. Gasquet, 2-12 versus Federer entering the match, started with an emphatic hold, but that was as good as it got for the prodigy who has never quite delivered.

"You saw how well Roger was playing, how he just killed Richard today," said Wawrinka.

Gasquet, replacing the injured Jo-Wilfried Tsonga, was broken for 2-1, which set the tone.

Federer lost just 14 points on his own serve and didn't face a break point. Evidencing how well his back must have been feeling, he soared and stretched to put away a smash with venomous side spin in the second set.

There was deft touch to seal the tie, Federer executing a half-volley drop shot before falling onto the clay at the Stade Pierre Mauroy. He joined the likes of Rafael Nadal, Rod Laver and Andre Agassi in winning a Davis Cup plus all four majors.

Unlike in majors, when players usually make the trek to their box after a title, in the Davis Cup the team habitually floods the court.

"It was definitely one of the better feelings in my career, no doubt about it," he said. "So much nicer to celebrate it all together.

"So thanks for running up to me and screaming in my ear. It was good fun."

Though he applied the knockout blow, Wawrinka's performance this weekend shouldn't be forgotten, and Federer took note.

He crushed Tsonga to give Switzerland its first point Friday and combined wonderfully with Federer in the doubles, his raw power a fine accompaniment to the artistry of Federer.

If he harbored any animosity towards Federer for reportedly being taunted by Federer's wife, Mirka, last week at the World Tour Finals, he didn't show it.

Wawrinka's season began in superb fashion with a first grand slam title in Melbourne and Sunday ensures it terminates well, following some bumps in between.

Roger #Federer: "Stan clearly was the MVP of this weekend." #DavisCup #SupportTheSwiss pic.twitter.com/Q8V1Zv2s3R

"It is an exceptional year for me," said Wawrinka.

But what to make of the French?

The brief fireworks produced inside the stadium after Switzerland's win provided more electricity than anything produced by Tsonga or Gasquet on the court.

About 90 percent of the record crowd of 27,448 for a pro tennis match Sunday were French fans, but they barely had an opportunity to get into the match. Over the three days, France claimed one set in the matches it lost.

"The French team said they were ready to go to war, if I can quote them," Wawrinka said. "What happened was totally the opposite."

Tsonga said a lingering arm injury returned Friday and the pain intensified following his outing against Wawrinka, yet the French No. 1 has not had a good year -- barring one tournament in Toronto.

Gasquet has never had the reputation of being a clutch player -- his play in doubles and against Federer won't help to shed the label.

And so France's drought, at least on the men's side, continues. A generation that promised plenty and was so determined to win the Davis Cup this year for a tennis loving nation has underachieved.

France, in an atypical luxury, contested all four of its series this year at home but was still unable to snap a 13-year drought.

"If you look at the tie as a whole, you can see that the Swiss players are at a higher level than us," French captain Arnaud Clement told reporters. "They're top (two) and top four of the world. We prepared for that as much as we could. But we knew that beating them would need an exceptional performance."

When Wawrinka was asked for a percentage regarding his availability for Switzerland's opening tie against Belgium next year, he replied, "I think the percentage we're going to drink alcohol tonight is very high."

If the French players were to drink some alcohol, it would be for different reasons.