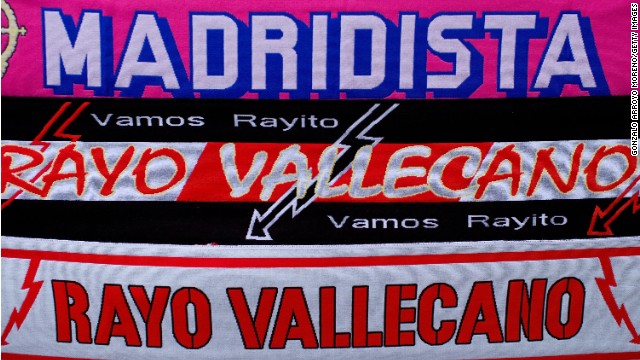 From January to June of 2014, 1,218 evictions have taken place in Spain -- an increase of 17% from the previous year.
STORY HIGHLIGHTS

(CNN) -- Over the past five years evictions have become a symbol of Spain's economic crisis, but the latest homeowner to face the prospect of homelessness -- an 85-year-old woman -- has found an unlikely guardian angel.

One of the poorest football teams in Spain's top division, Madrid club Rayo Vallecano, has promised to help Carmen Martinez Ayuso find a new apartment after she was evicted by her landlord.

From the Vallecas district of the Spanish capital, Ayuso had lived in the apartment for half a century but couldn't pay the rent after her son had used her home as collateral on a loan he was then unable to repay.

According to statistics published by the Bank of Spain, 1,218 evictions took place between January and June 2014 -- an increase of 17% from the same period in the previous year.

Back in 2012 it's estimated that there were up to 200 evictions a day as Spain suffered the consequences of a housing bubble that burst after the housing market crashed in 2007-2008, while unemployment also soared.

Ayuso's story grabbed the attention of the club with fans holding aloft a banner which read "Rayo against evictions" in a recent league match. 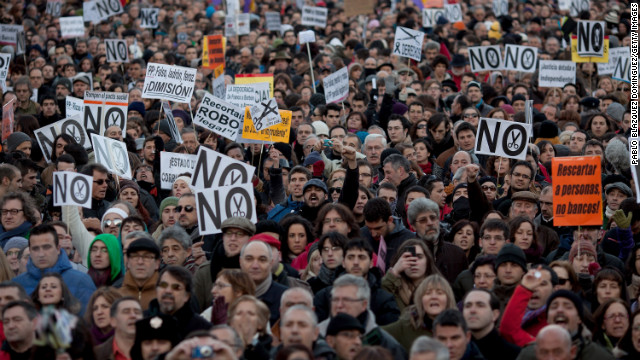 Demonstrators shout slogans at Neptuno Square during a march made by thousands of people on Saturday, February 23 in Madrid. 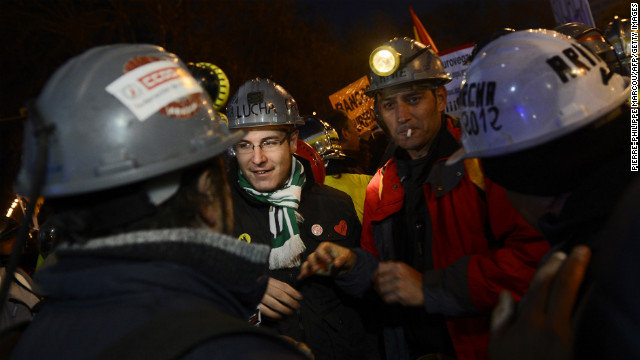 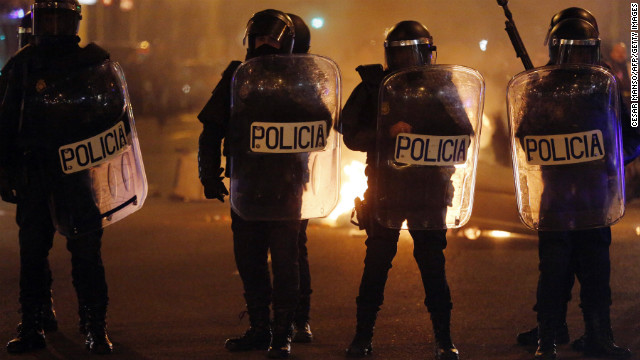 Spanish riot police stand in front of a fire at the end of a demonstration against government austerity measures in Madrid. 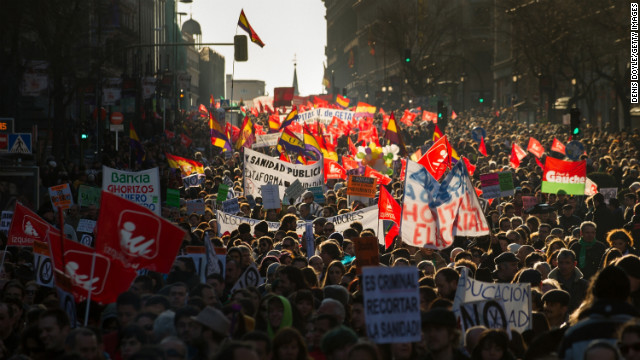 Demonstrators protest on February 23, in Madrid. 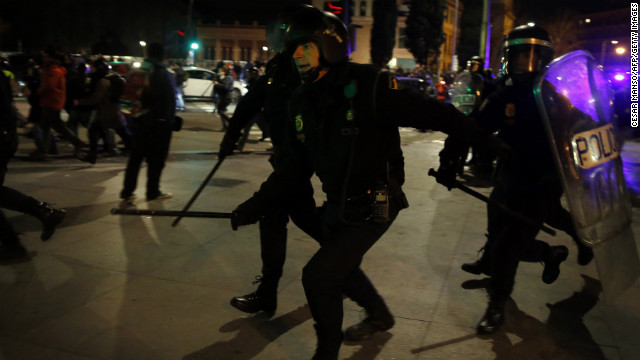 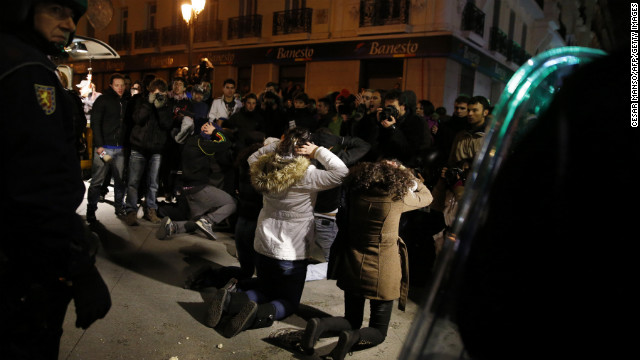 Protesters face Spanish riot police at the end of the demonstration in Madrid. 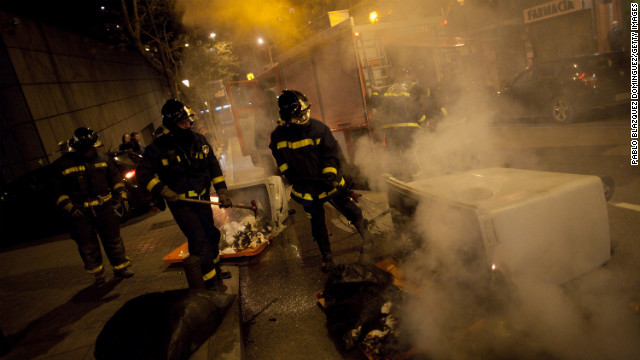 Firemen extinguish a bin on fire during a riot after a march by thousands of people. 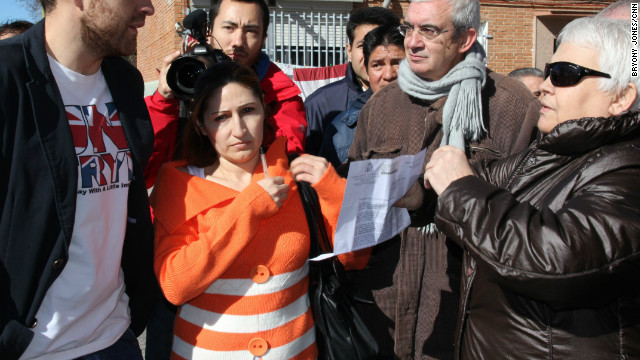 Spain's financial crisis has resulted in an eviction epidemic in Madrid. Ecuadorian immigrant Rocio (second left) lost her jobs when the recession hit, and has only narrowly avoided being kicked out of her apartment. 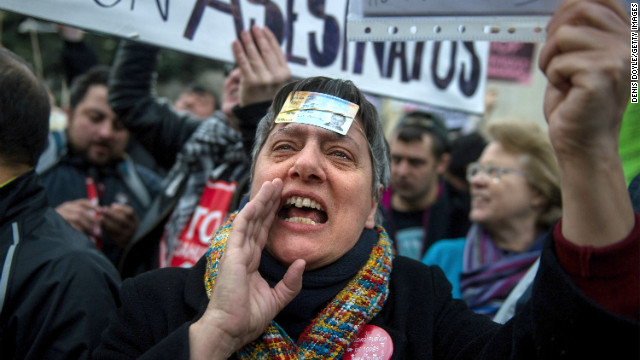 People protest against the Spanish laws on house evictions outside the Spanish parliament on February 12 in Madrid, Spain. 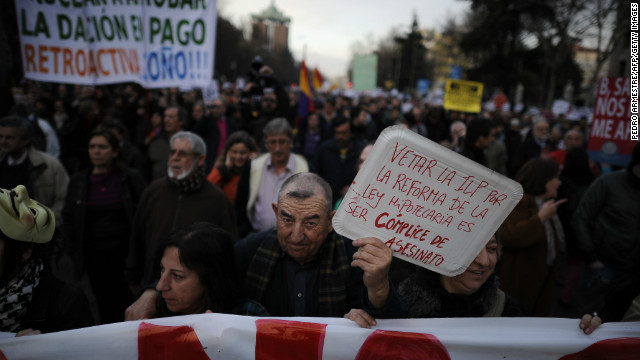 People attend a demonstration called by the organization Platform for Mortgage Victims on February 16 in Madrid. 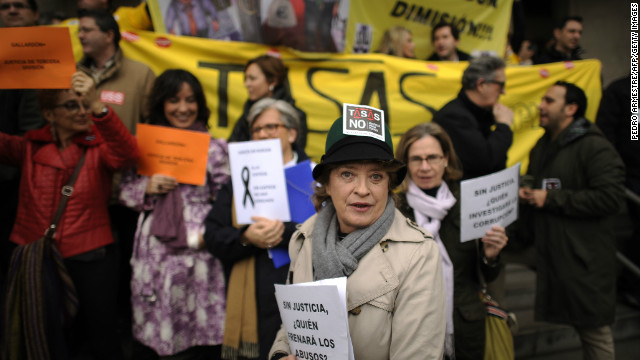 Court officials protest on February 20 in Madrid, during a strike called by judges, prosecutors and justice workers against the government's spending cuts. 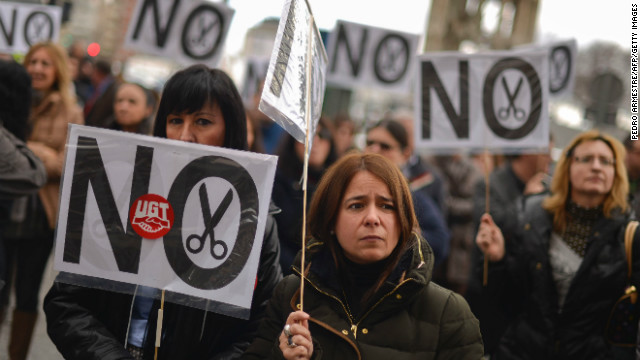 Judges, prosecutors and justice workers called the strike against the government's spending cuts. 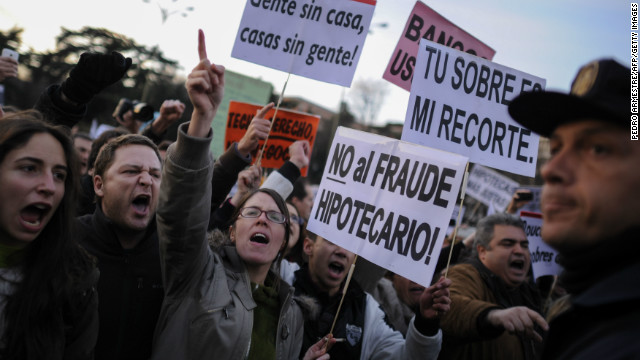 Platform for Mortgage Victims protests to push for a new law to end a wave of evictions of homeowners ruined by the economic crisis. 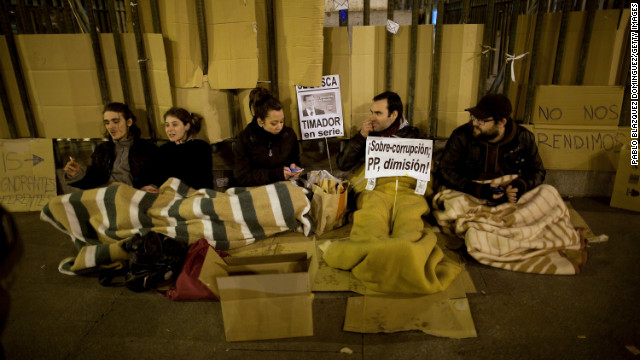 Demonstrators camp at a protest in Puerta del Sol Square after a demonstration against alleged corruption scandals implicating the PP (Popular Party) on February 3 in Madrid, Spain. 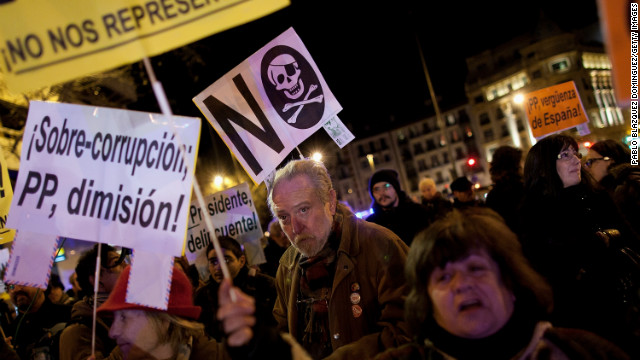 Protestors gather during a demonstration against alleged corruption scandals implicating the PP (Popular Party) on February 3 in Madrid, Spain. 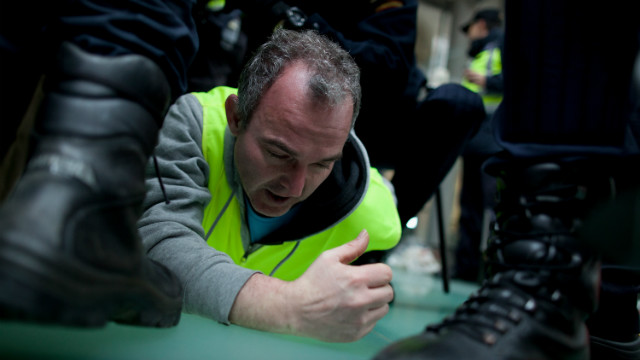 Policemen arrest a Spanish Airline Iberia worker during a protest against job cuts at Barajas Airport on February 18 in Madrid, Spain. 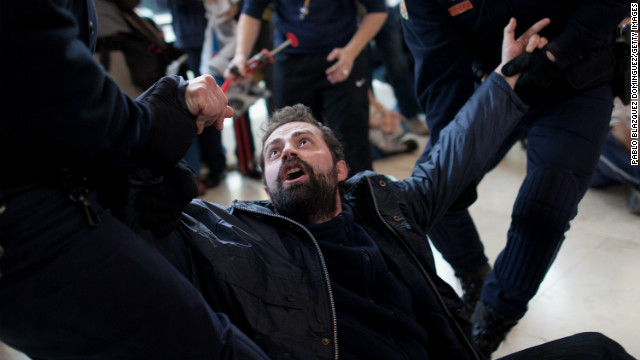 Riot police pull at a worker protesting from Spanish Airline Iberia during a rally against job cuts at Barajas Airport. 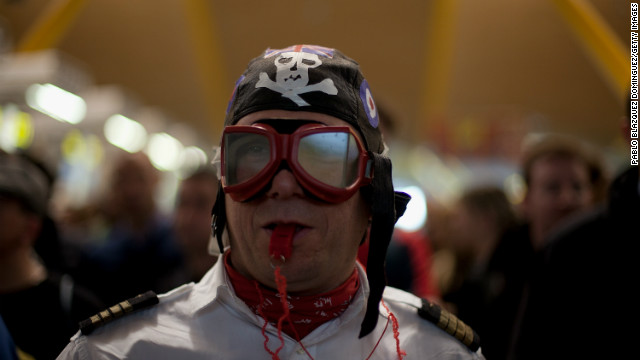 A Spanish Airline Iberia staff member blows a whistle during a protest against job cuts at Barajas Airport. 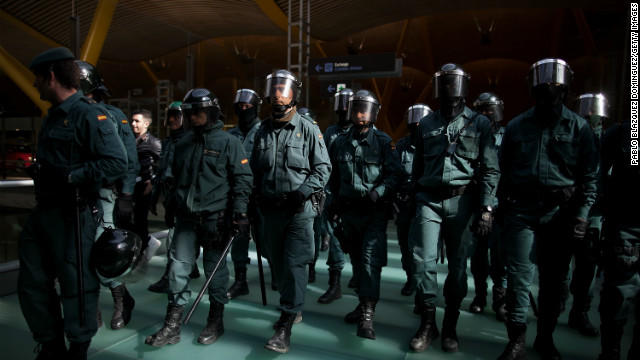 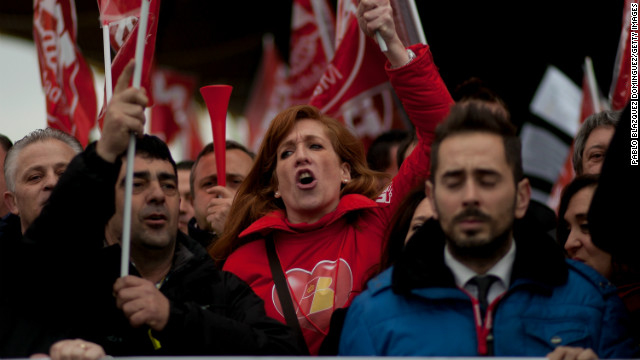 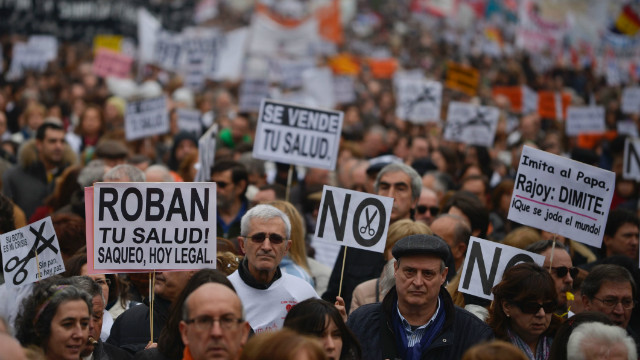 Protesters hold placards as they take part in a demonstration against plans to cut medical spending and privatize hospital services in Madrid on February 17. 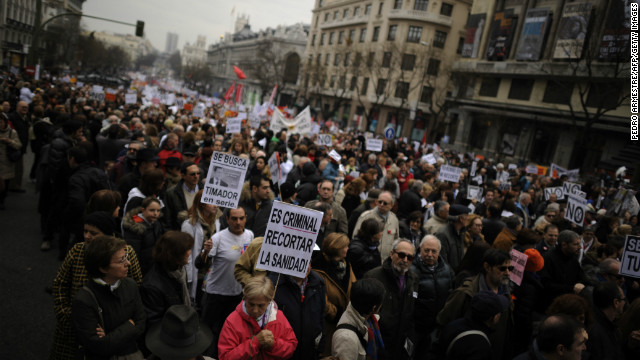 Madrid at the center of protests

Spanish fight to keep their homes

"I know that there are lots of cases like hers," Rayo coach Paco Jemez told reporters.

"The worst thing that can happen to a family is when they evict you from your home," added Jemez.

"This is a lady who lived in her home for 50 years and due to her doing an honorable act -- being the guarantor of her son, which everyone in the world would undoubtedly do."

Jemez has been in touch with Ayuso, who according to Spanish media, was unaware of the $50,000 loan her son had taken out.

He promised it wasn't just him that would try and help Ayuso, but that the "the coaching staff, the players, the club" would also become involved.

Jemez added: "Within our ability, we will help this lady and give her a hand so that she finds a place to live with dignity and so she doesn't feel alone.

"I'm very proud we can lend her a hand. I'd like to help more people, but that's impossible.

"What is within our power, we will do. Also, we will start an initiative so that anyone who wants to help will have the ability to lend a hand. We are very sensitive to this and what happened to her could happen to anyone."

Rayo has an annual budget of around $8.6 million -- a total which is incomparable to that of its big city neighbor Real Madrid which has a cool $720 million at its disposal.

Speaking to Spanish newspaper Marca, Ayuso praised the club for the "beautiful gesture."

She added: "A thousand times thank you, God bless them," she said. "It's a beautiful gesture that they didn't need to do and Viva el Rayo!

"If I see [Paco Jemez] I'll give him 40 kisses. But the only time I've seen him was during the neighborhood fairs.

"We always supported Rayo in this family. I remember when we used to go to the swimming pools, which were right next to the stadium. But now we have different motivations to support them.

"I'm certain my husband is showing his gratitude in heaven."