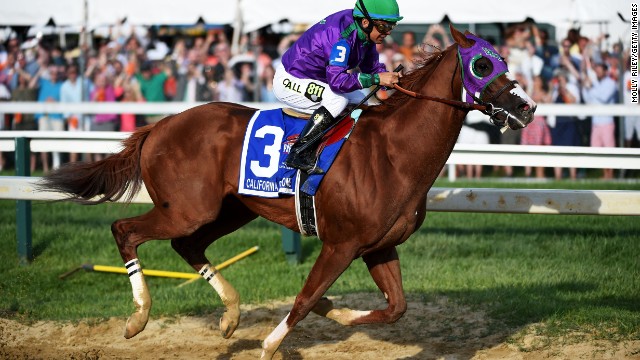 California Chrome has enjoyed highs in 2014 but also a few lows, yet he could still be crowned Horse of the Year in the U.S. 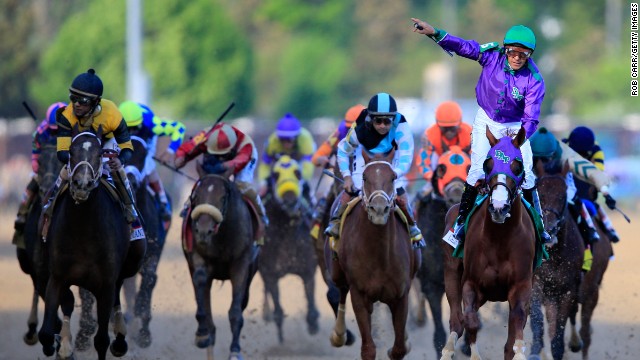 A major highlight for the three-year-old, ridden by Victor Espinoza, was winning the 140th running of the Kentucky Derby at Churchill Downs in May. 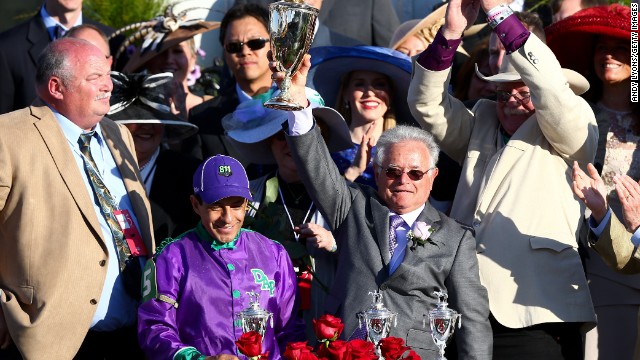 California Chrome's trainer Art Sherman (right) became the oldest trainer to win the Kentucky Derby at the age of 77. 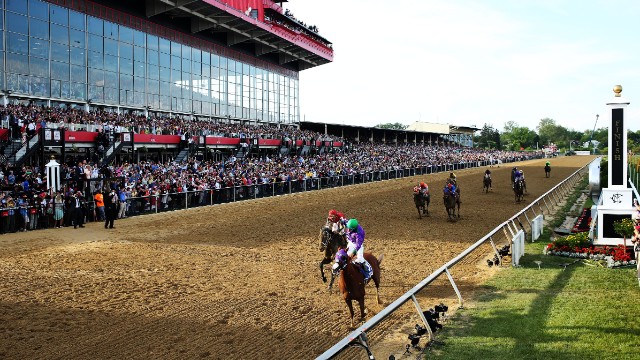 The chestnut colt followed up the Kentucky Derby by winning the 139th running of the Preakness Stakes at Pimlico Race Course later in May to set up the possibility of a first Triple Crown win since 1978. 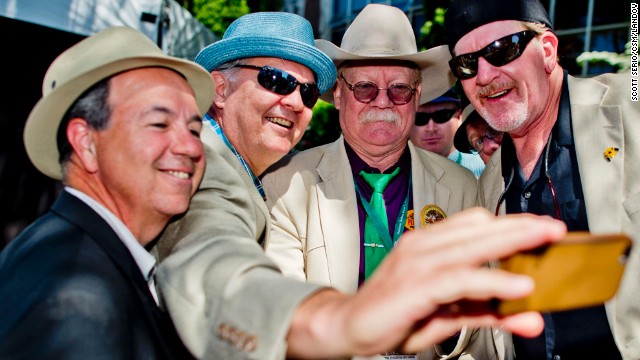 California Chrome co-owner Steve Coburn (second from right) poses for a photo with fans prior to the Belmont Stakes in June -- the final leg of the Triple Crown. 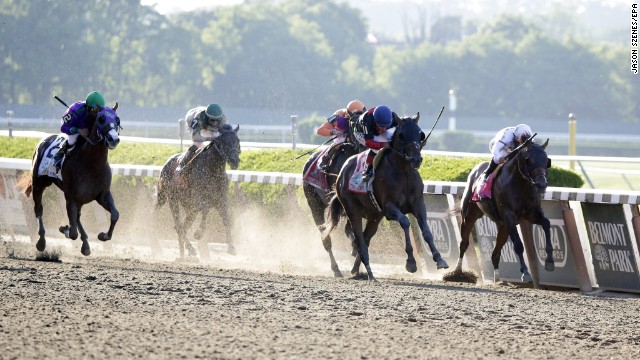 But it wasn't to be as California Chrome finished fourth at Belmont Park to narrowly miss out on becoming the first horse since 1978 to claim the Triple Crown. 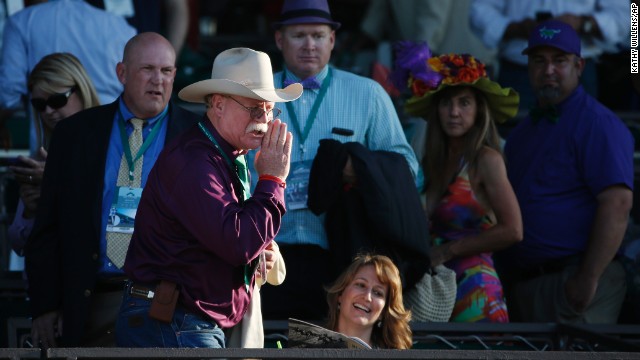 Coburn came under fire in the media for the unsporting comments he made directly after seeing his horse finish fourth at the Belmont Stakes. He later apologized. 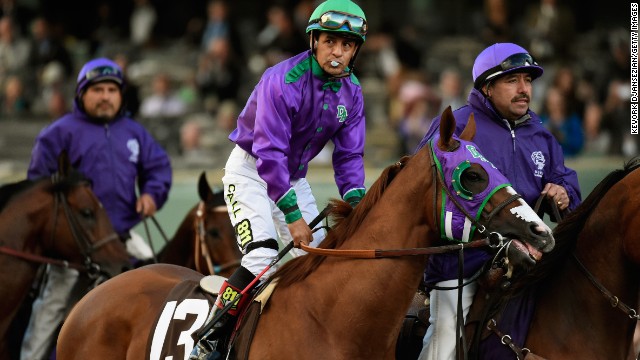 Following a rest period, California Chrome returned for the Breeders' Cup Classic in November, but had to settle for third in a race marred by controversy. 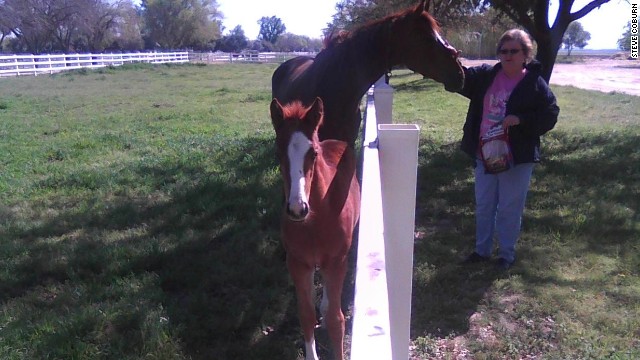 California Chrome, pictured with mother Love the Chase as a foal, was a huge bargain -- the mare costing $8,000 and breeding with sire Lucky Pulpit for just $2,000. 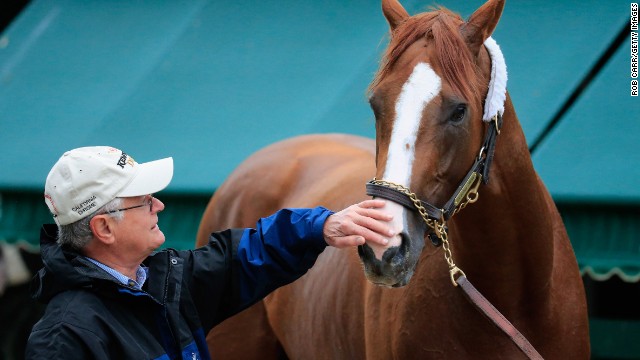 (CNN) -- California Chrome's 2014 has been something of a roller-coaster ride but the year could still end on a high in the colt's final race of the American thoroughbred horse racing season at Del Mar.

The peaks of a Kentucky Derby triumph and a six-race winning streak have been matched by the disappointing lows of narrowly missing out on the Triple Crown and a three-and-a-half-month layoff to rest.

Yet victory in the Hollywood Derby on Saturday could be enough to consign those darker memories to the past and fire the three-year-old chestnut colt to the prestigious Horse of the Year accolade at January's Eclipse Awards -- an annual ceremony recognizing the year's best thoroughbred horses.

"Winning the award after all these setbacks would be even sweeter," California Chrome's trainer Art Sherman told CNN.

"It would be a great accomplishment for California Chrome and the highlight of the year for him. To win the Eclipse would really be something special."

Coming out on top at the Grade 1 meet at California's Del Mar racetrack will be no easy task, however, given that it will be his maiden race on turf.

Chrome has arrived at Del Mar under the watchful eyes of Team Sherman pic.twitter.com/EYQeHCDCXL

In the days leading up to the event, Sherman and jockey Victor Espinoza have been working the horse hard on grass in anticipation that he will feel as at home there as he has done for much of the season on dirt.

"I don't think him running on grass for the first time will be a problem myself, I have a good feeling about this," Sherman says.

"If he gets the win then I think he deserves to be named Horse of the Year. To win on grass would be a whole new dimension for him, with his running style, so the voters would have to appreciate that."

Victory on grass would seal a fourth Grade 1 triumph of the year -- two more than any of his rivals have managed in 2014.

The three previous successes came at the Santa Anita Derby, the Kentucky Derby and the Preakness Stakes -- part of a six-race winning streak that captured the American public's imagination and set up the possibility of a first Triple Crown win in the sport since 1978.

"He got better and better as he turned three, he just got more mature," says Sherman, who became the oldest trainer to win the Derby in May at the age of 77.

"He really is something else, the Real McCoy. I've had some great horses, but I've never had one like him."

The Kentucky Derby and Preakness Stakes triumphs, however, could not be replicated in June's Belmont Stakes -- the three-year-old had to settle for fourth -- and so the wait for a 12th horse to achieve the Triple Crown goes on.

Steve Coburn -- one of the horse's two principal owners -- reacted to the loss with a barrage of unsporting criticism and was later humiliated in the media for what was perceived as a severe case of sour grapes. He later apologized.

Sherman, meanwhile, still struggles to talk about the Triple Crown near miss, and California Chrome himself has yet to record a victory since the disappointment at Belmont Park.

"I thought we could win that Triple Crown going into the last race," Sherman recalls. "But California Chrome had problems in the race -- he was stuck and couldn't get out, he was stuck down in the railing.

"You hate making excuses for the horse, except I think he could have been the winner, I really do. The Triple Crown would really have been something. It would have been a real highlight."

Despite the setback, Sherman remains confident that the chestnut colt's record this year will be "enough" to at least secure the three-year-old-male title at the Eclipse Awards, with a trophy being presented to the most impressive horse in each division.

Had California Chrome won the Breeders' Cup Classic in October the Horse of the Year award may have been a formality, but he could only finish third.

The controversial race perhaps should have been more fruitful had Bayern and Toast of New York -- who finished first and second respectively -- been disqualified for early collisions involving the unfortunate Shared Belief.

"It was frustrating watching the way the start went, it was very controversial ... we're dealing with a $5 million race here," says Sherman.

"If we'd have won the Breeders' Cup Classic, the Eclipse Award would have been tied up by now. If there had been a double disqualification then we would have won."

"But timing is everything in this game," Sherman adds on California Chrome's return from his rest period.

"I never got the chance to get a strong race out of him afterwards. I think that's what cost us the Breeders' Cup, to be honest with you."

While 2014 appears to be tinged with a sense of regret for Sherman, it is still a year that has brought about unforeseeable levels of success, and the future remains bright for California Chrome.

Despite persistent rumors that the three-year-old might not even race next year, it has since been confirmed that the chestnut colt will be back on the track in 2015.

Sea The Moon aims for the stars

"The success this year hasn't come without its setbacks. But when you're running horses you're always going to have setbacks and you can't have a perfect trip," Sherman says.

"I wasn't 100% sure if he was going to race anymore. There were rumors that people were going to try to buy him, but the owners want to race him at four years old.

"He will be racing next season and the future is looking good, you bet."

Lost among the excitement of looking ahead to the future for California Chrome, while also reflecting on this year's achievements, it can be easy to forget about the horse's humble beginnings and just how the story all started.

Fast forward to today, and that investment has produced an offspring which has amassed $4 million in career earnings, is said to be worth in the region of $12 million and is potentially one race away from being crowned the supreme horse of 2014.

"Winning the award would really be something, and what a great story for everyone to write about given the horse has gone from a $10,000 investment to making the money he has made," Sherman says. "It's a poor man's dream."

Read: California Chrome is racing on a rock star's dream