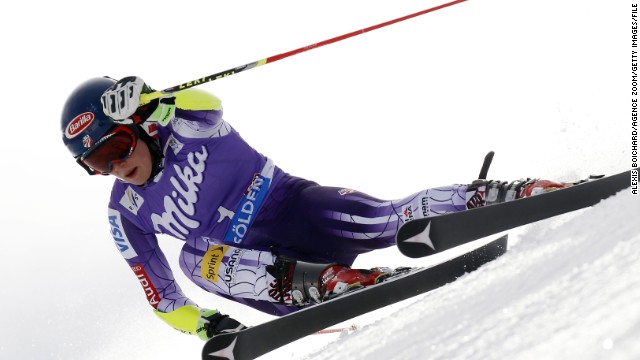 Mikaela Shiffrin is an Olympic champion and one of the most recognizable faces in skiing. 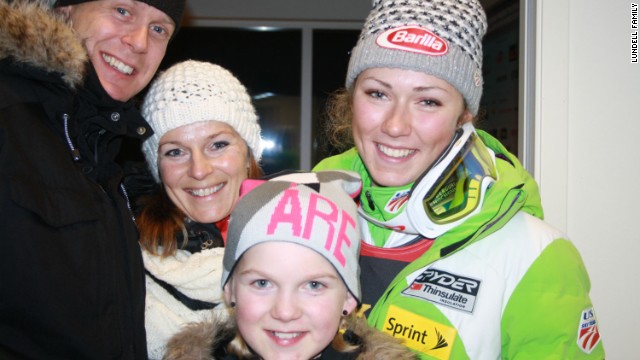 But away from the slopes, Shiffrin has taken time to help Swedish teenager Emma Lundell, who was suffering from cancer. Here the American and the Lundell family pose together in 2012, just after Shiffrin had won her first World Cup gold medal. Mikael Lundell, Annika Lundell, Emma and Shiffrin are pictured together. 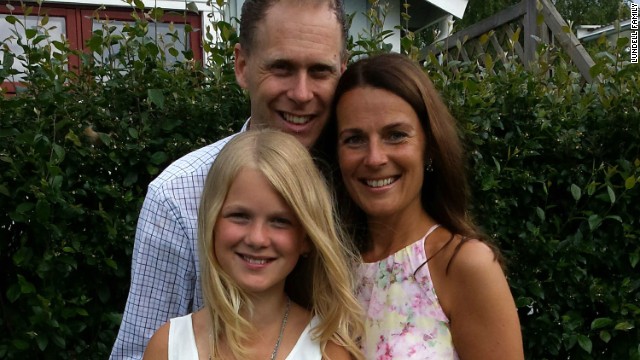 Mikael has an inoperable brain tumor. The 41-year-old, a former Alpine skier, had been the initial inspiration for daughter Emma's love of the sport. Here the Lundell family -- Mikael, Annika and Emma -- are pictured together. 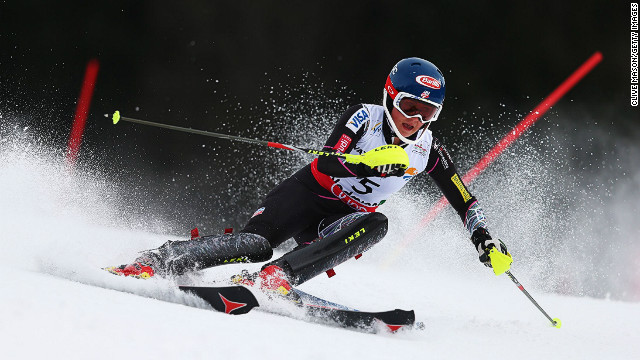 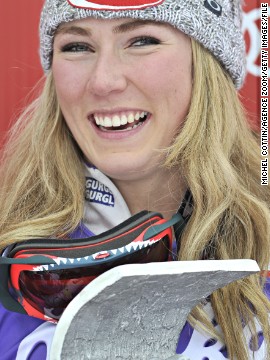 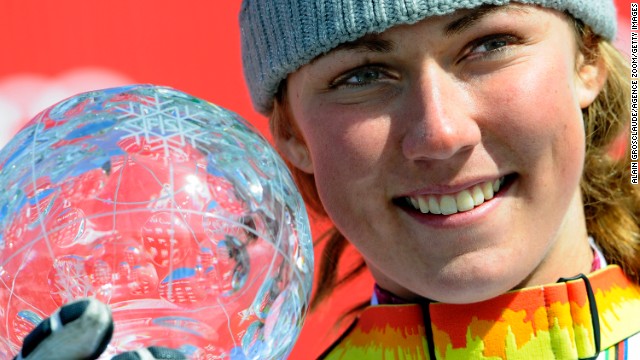 Shiffrin says it has been an" eye-opening experience" to meet Emma. 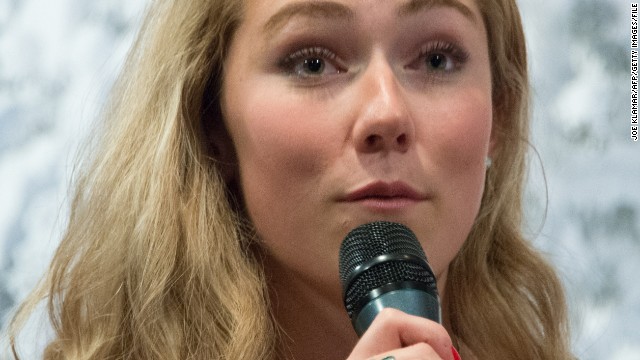 Since Shiffrin's first World Cup win in 2012, she has met and reached out to a number of other children with cancer. 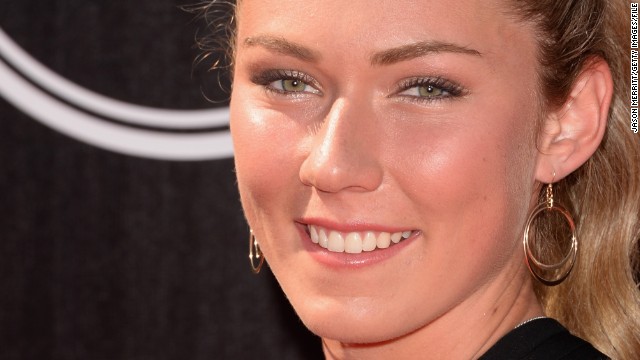 (CNN) -- They have barely met, lead lives a world apart and did not speak for two years. But Emma Lundell has made Mikaela Shiffrin cry, and Shiffrin has given Lundell hope.

Lundell is a 13-year-old Swedish girl. Shiffrin is an Olympic champion ski racer, one of the finest the United States has ever produced.

The story begins in Åre, Sweden, in December 2012. A night slalom, under the lights, five days before Christmas.

Shiffrin, then 17 years old, raced to her first-ever World Cup victory that night. In the whirlwind of celebrations, interviews and emotion that followed, she would have every reason to forget the details.

The four disciplines of Alpine Skiing

Lundell was also having the night of her life in Åre. Profoundly sick with leukemia, the 11-year-old had been brought to the race by a charity looking to give her a break from chemotherapy.

At the end of the night, Lundell had the chance to attend Shiffrin's post-race press conference.

"I remember it really well," says Shiffrin, two years on. "My first World Cup win was such a special time for me. I remember doing the press conference, doing the award ceremony, and then immediately meeting Emma.

"I remember seeing her in her cute little hat. She was so small. Every little detail of that meeting is so clear."

A seriously ill, young skiing fan thrust into the heart of the action, Lundell gingerly waited until most people had left before summoning the courage to ask Shiffrin for a picture.

"Her mother offered to take the photo so my whole family could be in the picture. I told Mikaela that I had cancer, and she was interested and understanding. She was so humble," says Lundell.

"There was so much commotion going on," says Eileen. "But this was one of those things that just stops you in your tracks. This poor mom, she had tears in her eyes. And when she told me that Emma was going to be undergoing treatment for cancer, I just-about died.

"We were walking away when Mikaela said, 'Oh, I should give my winners' bouquet to Emma.' So she ran back to find her and that was when the mom just broke down and started crying. I can't even imagine being in that boat."

"My heart melted and I couldn't stop the tears," Emma's mother, Annika, says now. "I looked at Mikaela and I looked at her mother, and I was just happy. So happy. And proud."

On January 24, 2011, Annika had received unthinkable news: both her husband and her daughter had cancer.

The diagnoses came on the same morning. Emma had leukemia and her father, Mikael, had a brain tumor that was growing again. He had been fighting it since 2003.

"It was horrible. The two people you love most in the world," says Annika, 40.

Mikael's tumor is now inoperable. The 41-year-old, a former Alpine skier, had been the initial inspiration for daughter Emma's love of the sport.

When she met Shiffrin, she came away with a new hero.

"It meant the world to me," says Emma, speaking perfect English. "It meant so much. It was so generous of her, and she was so good-hearted. It was a short meeting but it will stay in my mind and my heart forever." 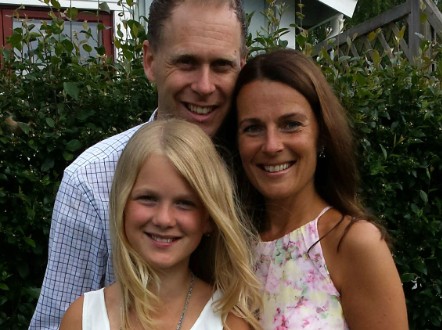 "Meeting Emma really resonated with me," says Shiffrin. "But as time went by, both my mom and I were honestly thinking -- you know -- what's the worst that can happen, essentially. Maybe she's not around any more.

"Which is obviously pretty morbid. You're thinking of the worst."

Almost two years later, Shiffrin has become an Olympic champion and one of the most recognizable faces in skiing.

In October 2014, Shiffrin is nearing the end of a punishing interview schedule -- fighting back jet-lag in the Austrian Alps -- when a journalist from Expressen, a Swedish newspaper, asks her to watch a video on his laptop.

There is Emma. Healthy, happy Emma, with a video message for her idol (it had been the newspaper's idea).

Shiffrin gasps as the teenager begins to talk.

"You gave me the energy to carry on," Emma tells her in the message, "to keep fighting to beat the cancer.

"Today, I'm not on chemotherapy any more. I'm much better. I got my hair back and I'm feeling stronger, day by day."

Shiffrin is wiping away tears as the video finishes.

Eileen Shiffrin, who was in the room when Mikaela saw the message, could not believe the transformation in the girl they had met two years earlier.

"She looked amazing," says Eileen. "She looked so different. She had no hair when we saw her. She was definitely smaller and younger, paler and thinner -- much thinner.

"So to see her looking so filled-out and rosy-cheeked, with gorgeous, long blonde hair... I mean, she was beautiful. And well-spoken, unbelievable."

A month after seeing that message, Mikaela Shiffrin tells CNN: "That video brought so many emotions to the surface that I didn't even know I was feeling up until that point.

"One of my very best friends, growing up, was diagnosed with cancer when we were both 14.

"It was two years of harsh treatments, complications from the treatments, and then the past couple years he's been healthy -- but you would never wish that on anybody, especially not as young as Emma or my friend.

"That young, there's a certain innocence that is immediately taken away when you're diagnosed with something like cancer. That innocence is supposed to be there a little while longer."

Shiffrin acknowledges she has an important role to play in how she, as a prominent athlete, addresses cancer and supports victims.

It is not something she had considered, growing up with only ski racing on her mind. Yet since that first World Cup win in 2012, she has met and reached out to a number of other children with cancer.

"I wanted to race the World Cup, I loved ski racing and I wanted to be the best in the world. And that was it," she says.

"I didn't even think about the media, and TV, and interviews. That you have to have that side of the sport, in order for it to be a sport.

"In order for me to actually see World Cup racing when I was five, my favorite athletes had to go through the whole media round that I'm doing now.

"Especially in the past couple years, I've gotten more used to this side of things -- having fans, having young kids out there who think I'm their idol.

"Sometimes it feels like an obligation, more like a burden, and then I get these eye-opening experiences like meeting Emma -- then more than two years later, getting that message. I'm very lucky.

"It seems like every year or two, something happens to me that brings me back down to earth, and I shouldn't be the girl that doesn't have time for this."

Emma Lundell's battle goes on: the chemotherapy is over but she will not get the all-clear for four more years. Doctors say her father will never be healthy again.

"The chemo was hard and I have lost friends I left in hospital," says the 13-year-old. "I have seen friends die.

"Today, I feel much better. I'm getting stronger. I'm happy to have my hair back, and I'm training my fitness to return to normal life and the ski tracks again.

"Mikaela means so much to me. She cared about me, a little girl from a small town in Sweden, and my fight."

Her mother, Annika, says: "For us, a superstar saw our little daughter and even remembered her, two years later. It's incredible."