What I told my kid about Ferguson 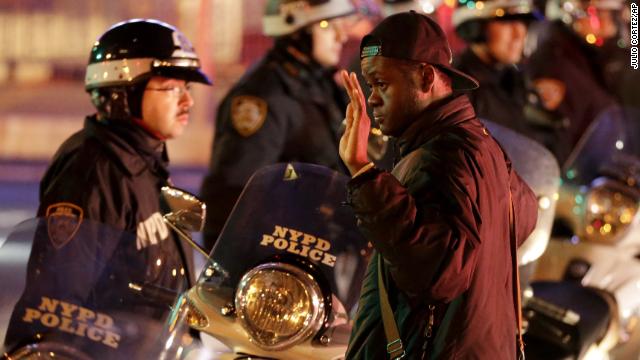 A man stands with his hands raised in front of a line of police officers during a protest after it was announced that the New York City police officer involved in the death of Eric Garner was not indicted, Wednesday, Dec. 3, 2014, in New York. A grand jury cleared the New York City police officer Wednesday in the videotaped chokehold death of Garner, an unarmed black man, who had been stopped on suspicion of selling loose, untaxed cigarettes, a lawyer for the victim's family said. (AP Photo/Julio Cortez)
STORY HIGHLIGHTS

Editor's note: David Wall Rice is associate professor and chair of the Department of Psychology at Morehouse College, where he also leads the Identity Orchestration Research Lab. He is currently writing his second book, "Race, Gender, Class and Context: Being and Becoming More." The views expressed are his own.

(CNN) -- "Take deep breaths," I tell my son. The irony of the instruction isn't lost on me after he begins to explain why he is so upset. It's the end of a long day -- dark way before I think it should be, as the cold hasn't quite taken full hold in Atlanta.

I got the text from Dr. Adams just before 3 p.m. Once my abnormal psychology professor, now a super colleague in the department, her message read, "No indictment ... disbelieving."

But I had come to terms with this injustice visited on Eric Garner and the rest of us -- at least in my mind. I'd compartmentalized things since the week before with the no-indictment in Ferguson, Missouri. I clinically went about lecturing and working with my students from Spelman and Morehouse in thinking through their protest of solidarity with Ferguson and the epidemic extrajudicial killings of black folks. They began their "Make it Matter" protest last Tuesday at the foot of the Martin Luther King statue on Morehouse's campus and moved on to CNN Center a few miles away.

I was proud. Teary-eyed. They lifted me up.

Cook: 'Example of a peaceful protest '

I'd brought my kid to work that day. And this is when I would begin a focused dialogue with him, in 7-year-old-speak, about the situation in Ferguson, Michael Brown and issues of race and social justice. The little guy took it just fine, asked a few questions for clarity and then concluded, "but if a police officer is supposed to protect the people and then he shoots a teenager because he's afraid of him, even though the teenager doesn't have a gun, then [the police officer]'s a brute."

And since then, I've talked with, taught and consoled students on campus, reflecting on the tumult I experienced some 22 years prior in the aftermath of the police beating of Rodney King. Eric Garner's killing is an amped-up, 21st-century manifestation of that violence with an echo of past New York cases like those of Yusuf Hawkins, Michael Griffith and William Turks.

Still, I've resisted putting it all together. Donovan X. Ramsey explained it to me so well last month with his essay "Without Sanctuary."

But then my son, voice quivering after the long day, said, "I've been thinking about the problems in the world." Wow. I knew he was too cool about this last week. "And Mike Brown, and people don't like other people because of their skin," he continues, before collapsing between the front and back seat, sobbing into my arms.

"Breathe," I say, using every ounce of physical strength I have not to cry with him. Not right now. He doesn't even know about the failure to indict Officer Pantaleo in New York on Tuesday.

"The world is better already because of people like you," I say as I begin to re-frame the conversation. "You know what's right and what's wrong, and so do the students that you met last week. And we're all going to be kind to one another, study and figure how to make it better."

I sounded very convincing, as parents are supposed to.

The academic year started with the police killings of Michael Brown and Eric Garner, and the semester ends with the decision that these were somehow legal. This weighs heavy for so many. In the bubble we build at Morehouse College we hold up young black men. We work to show them the best parts of who they are, making conspicuous a humanity that the body politic refuses to see as the norm.

That's the core of the work that we do. But it's a hard sell when the young people you reason with note that you can be shot to death in broad daylight, or choked to death on camera because white folks are scared of you.

Still, the truth is that black men and women and black kids -- girls and boys -- are not disposable. We are of value. We are not objects.

Breathe. Of course, this is as much a mantra for me as it is instruction to my boy. Breathe, and then let's continue to do the work.