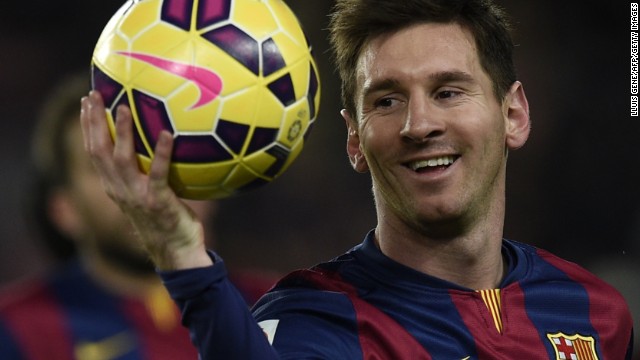 Lionel Messi's collection of match balls for scoring hat tricks has increased at a rapid rate in the last month.
STORY HIGHLIGHTS

(CNN) -- Lionel Messi and Cristiano Ronaldo are matching each other hat-trick for hat-trick as their remarkable scoring battle continues apace.

Messi grabbed his third treble in four games Sunday to lift Barcelona to a 5-1 derby victory over Espanyol in the Nou Camp.

It came the day after Ronaldo took his La Liga record for hat-tricks to 23 as Real Madrid stayed top of the standings with a 3-0 win over Celta Vigo.

Barcelona's come from behind win has seen them move back into second spot, two points behind its arch rival.

Both men have scored over 200 goals at better than a goal a game since Ronaldo first moved to La Liga with Real in 2009, with a string of records falling into their grasp.

Barca needed Messi's magic after going behind to its city rival as Sergio Garcia converted with a fine early strike.

The Argentine ace conjured up the equalizer in first half injury time after being set up by Xavi on the edge of the penalty area.

It was to open the floodgates and within five minutes of the restart Luis Suarez had centered for Messi to put Barca ahead for the first time.

Gerard Pique connected with a Ivan Rakitic corner to head the home side further ahead with Pedro Rodriguez adding the fourth after a brilliant through ball from Jordi Alba.

Messi completed his 21st hat-trick for Barcelona near the end after an assist from Pedro to send home the majority of the 76,057 fans home happy.

Meanwhile in the English Premier League, Andy Carroll scored twice as West Ham beat Swansea 3-1 at Upton Park to move up to third in the standings behind Chelsea and champions Manchester City.

Ciaran Clark had canceled out Leonardo Ulloa's opener for Leicester at Villa Park.

In Italy's Serie A, Genoa has also moved up to third spot after handing AC Milan its first away defeat of the season.