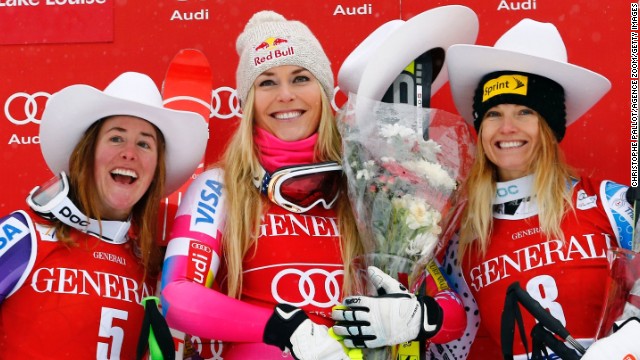 Lindsey Vonn is flanked by Stacey Cook (left) and Julia Mancuso as the U.S. swept the podium in Lake Louise.
STORY HIGHLIGHTS

(CNN) -- Skiing superstar Lindsey Vonn led an historic sweep of a World Cup podium for the United States with a stunning comeback victory in the downhill at Lake Louise Saturday.

Vonn has endured a miserable 22 months since sustaining career-threatening injuries in a high speed crash at the world championships in February 2013, but returned to the top of the podium with a commanding performance in the Canadian Rockies.

A promising eighth in Friday's opening downhill at the resort, Vonn called on all her experience on the slope to record a time of one minute 50.48 seconds.

Read: Vonn out of Sochi Olympics

Comeback: Lindsey Vonn to "risk it all"

Vonn: Tiger is an 'inspiration'

Lindsey Vonn out of Winter Olympics

It left her 0.49 seconds ahead of teammate Stacey Cook, with Julia Mancuso in third completing a triumphant race for the American team, the first time it has achieved such a feat at this level.

It was the 12th World Cup downhill victory for Vonn, who was unable to defend her 2010 Olympic downhill title at the Sochi Games earlier this year because of her injuries.

"I am extremely happy to be on top of the podium again and also with my two teammates. It couldn't be a better day," she told the official FIS website.

Vonn is nicknamed "Lake Lindsey" because of her liking for racing at this venue, wrapping up her 15th victory there in all disciplines since her first win in 2004.

"I think I am as much excited for the whole experience of the three of us being on the podium as I am for myself," said the improving Cook.

Stefan Abplanalp, who coaches the U.S. squad in the speed disciplines, said their hard work ahead of the season had paid off.

"I'm very proud of the team. They really succeeded and achieved their goals. It was a pretty big day for the U.S. Ski Team, with a podium sweep," he told CNN.

I competed and Linds won.

Vonn's boyfriend Tiger Woods, who has been battling fever and indifferent form on his comeback to golf after injury, summed up their respective fortunes on Twitter.

"I competed and Linds won," he posted.

Slovenia's Tina Maze, who jointly claimed Vonn's Olympic title with Switzerland's Dominique Gisin in Sochi, had won Friday's opener, but could only manage eighth in the second race.

Gisin was back in 29th as she battles to return to her gold medal form.

Vonn can also gain encouragement from her second place in the super-G competition Sunday which concluded the weekend's racing at Lake Louise.

She was edged out by Olympic bronze downhill medallist Lara Gut with World Cup overall points leader Maze in third to complete her fine weekend.