New York (CNN) -- Britain's Prince William and Kate left flowers at one of the reflecting pools during their visit to the 9/11 Memorial and Museum Tuesday morning, both pausing to reflect as somber skies and pouring rain marked the occasion.

A handwritten note placed with the flowers read: "In sorrowful memory of those who died on 11th September and in admiration of the courage shown to rebuild. William and Catherine."

Their visit to the memorial was the first stop on the royal couple's jam-packed third and final day in New York City. The Duke and Duchess spent roughly 30 minutes inside the museum, remarking on the "survivors' staircase" that was salvaged from the tower ruins.

The note the Duke & Duchess of Cambridge left with their bouquet at the #911Memorial. #RoyalVisitUSA pic.twitter.com/LewELdYdv4

"They had lots of questions and interest in how these stairs were used by hundreds of people on that day to escape," said Joe Daniels, the museum's president.

Both also visited the "In Memoriam" exhibition, which holds profiles of 9/11 victims, and a wall that bears 2,983 blue tiles -- one for each of the victims of the attacks in New York, the Pentagon and the Pennsylvania site where a hijacked plane crashed, plus the victims of the 1993 World Trade Center bombing.

Before leaving the museum, Kate and William both signed an interactive electronic tablet, writing "Catherine" and "William" in script, which projected their signatures on a 60-foot wall in the museum's Foundation Hall.

"It was a tremendous visit, and you could see in, really, both of their eyes, the sort of care and curiosity they had for the story of what happened and the people who died that day," said Daniels.

The Duke and Duchess of Cambridge at the Virgil quote inside the #911Museum. #RoyalVisitUSA #Tribute2983 pic.twitter.com/xOwD9vty8b

The museum was open to the public during their visit, though other museumgoers were kept at a distance. Echoing the excited crowds that greeted the pair at their arrival at the Carlyle Hotel Sunday evening, a dozen or so visitors awaited the couple's arrival in the museum lobby, ready with their camera phones.

Mary Failes of Virginia Beach, Virginia, was one of them. A longtime "royal watcher" who held a "baby shower" for Kate and hosted a viewing of Prince Charles and the late Princess Diana's 1981 wedding at her home, had long planned to visit the 9/11 museum and just happened to be there the same day as William and Kate.

"It was just a coincidence -- meant to be!" Failes said.

The pair later then made their way to an event hosted by The Door and the CityKids Foundation, both arts-education and youth-development centers for disadvantaged youths in the West Village neighborhood of Manhattan.

Royals get wet on Day 3 of NYC tour 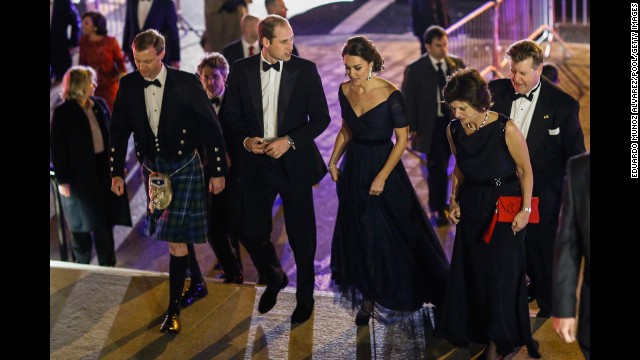 Prince William, Duke of Cambridge, and Catherine, Duchess of Cambridge, arrive at the Metropolitan Museum of Art to attend the St. Andrews University 600th anniversary dinner on Tuesday, December 9. The royal couple visited the United States for three days. 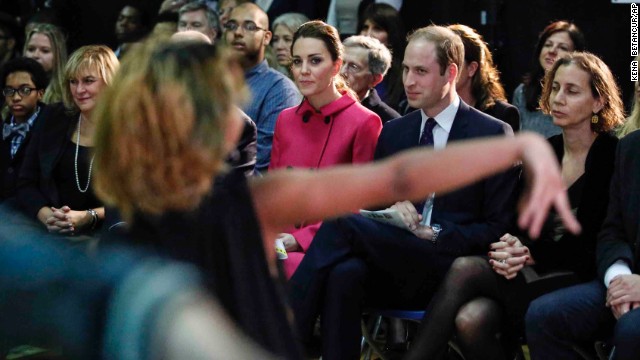 The royal couple attend a show presented by the organization The Door and the City Kids Foundation in New York on December 9. 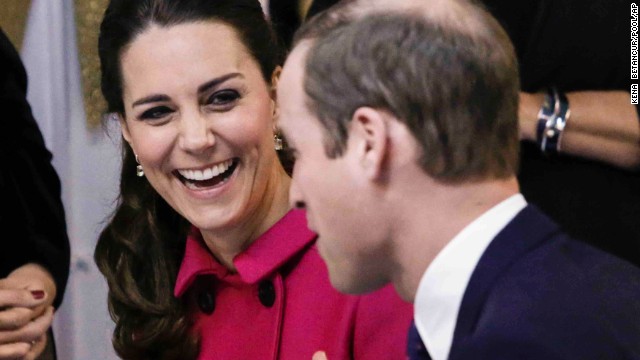 The Duchess of Cambridge smiles as she and Prince William visit the The Door and the City Kids Foundation on December 9. 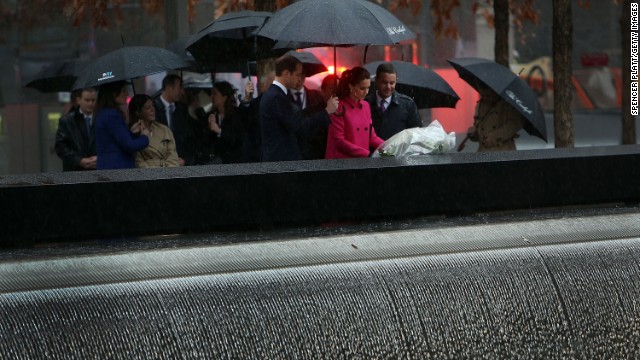 The royal couple lay a wreath at one of the reflecting pools of the National September 11 Memorial and Museum on December 9. 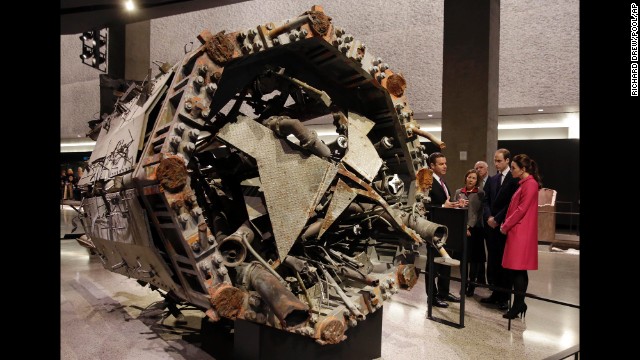 The royal couple tour the National September 11 Memorial & Museum with Joe Daniels, left, president & CEO of the museum, on December 9. 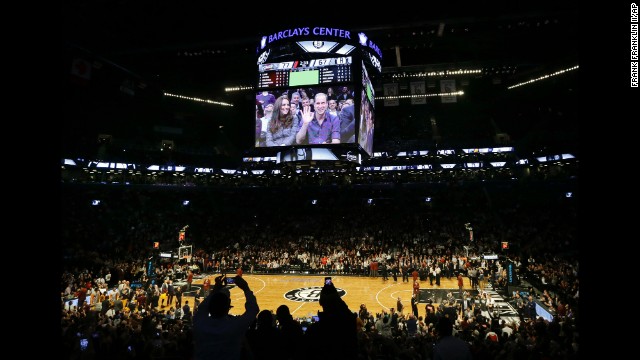 The duke and duchess wave to the crowd while attending an NBA basketball game in Brooklyn, New York, on Monday, December 8. 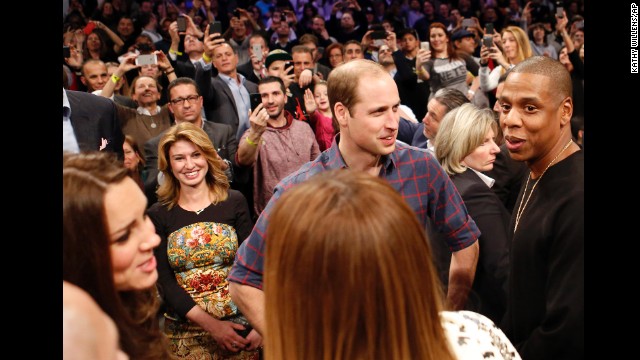 Prince William talks with rapper Jay-Z as Kate chats with singer Beyonce after the basketball game. 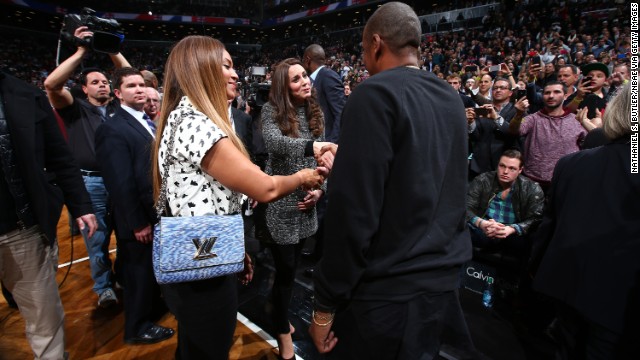 Beyonce and Jay-Z talk with the royal couple after the game. 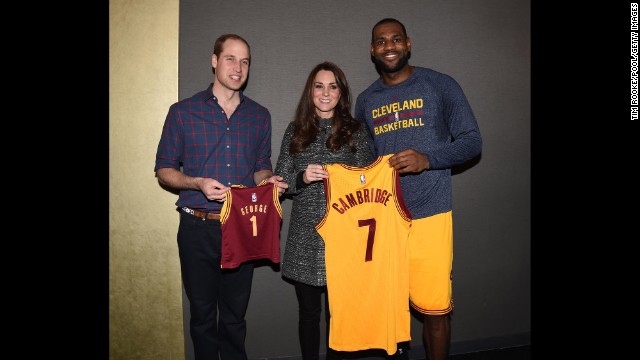 The royal couple poses with basketball star LeBron James after the game. Prince William is holding a jersey made for their son, Prince George. 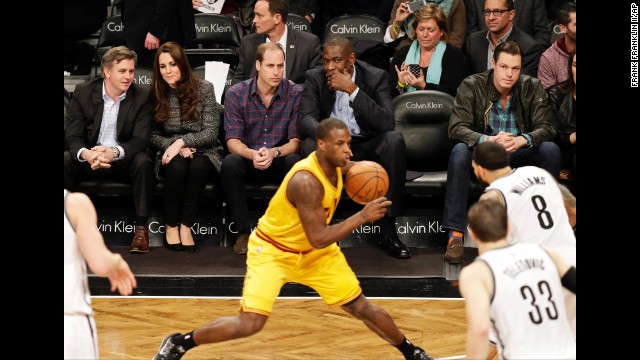 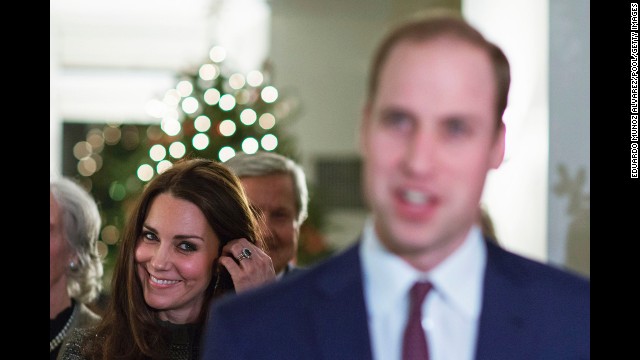 The duchess smiles while she listens to Prince William talk to guests December 8 at a reception in New York co-hosted by the Royal Foundation and the Clinton Foundation. 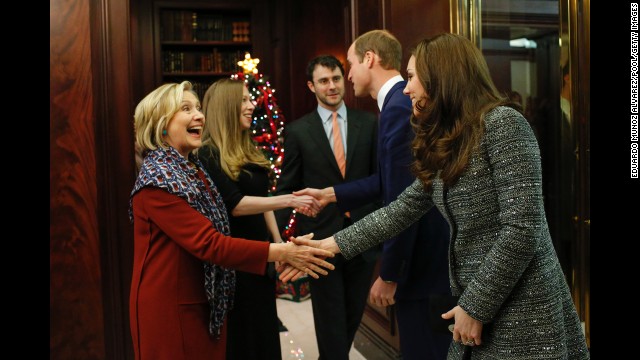 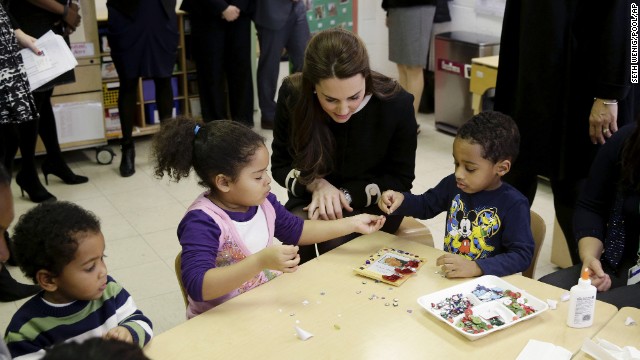 Kate sits next to children December 8 during a preschool class at the Northside Center for Childhood Development in New York. 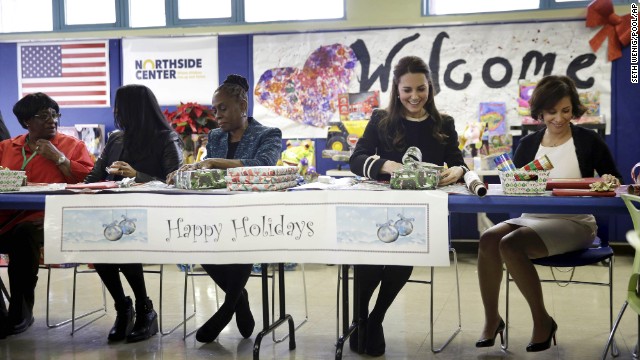 Kate wraps presents for children with Chirlane McCray, wife of New York Mayor Bill de Blasio, and other volunteers at the Northside Center on December 8. 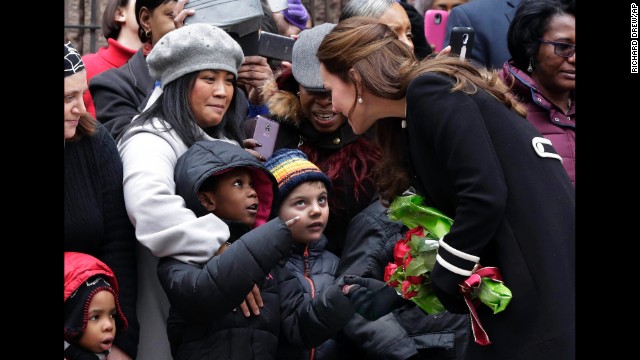 Kate greets children outside of the Northside Center on December 8. 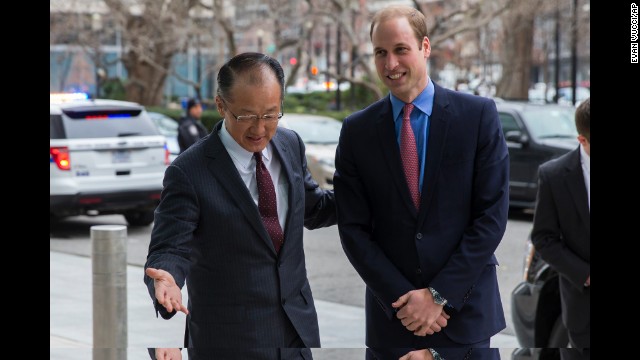 Prince William is greeted by World Bank President Jim Yong Kim before an event December 8 at the World Bank in Washington. 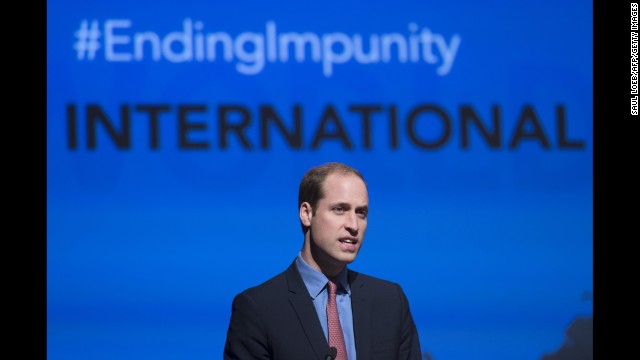 Prince William speaks at the World Bank on December 8. 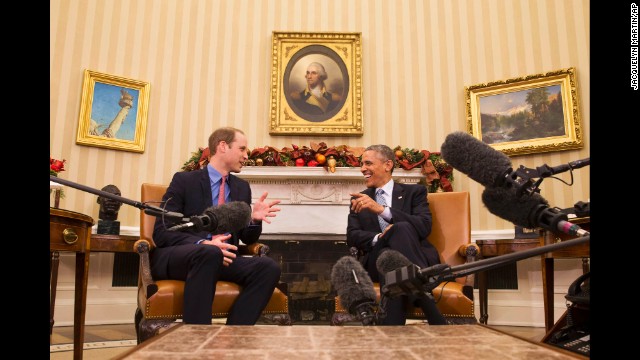 U.S. President Barack Obama laughs with Prince William in the Oval Office of the White House on December 8. 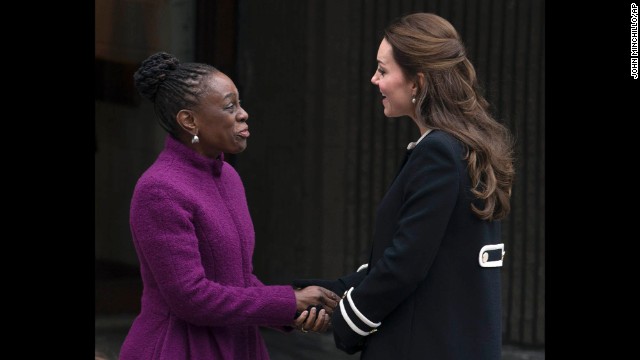 McCray shakes hands with Kate outside the Northside Center on December 8. 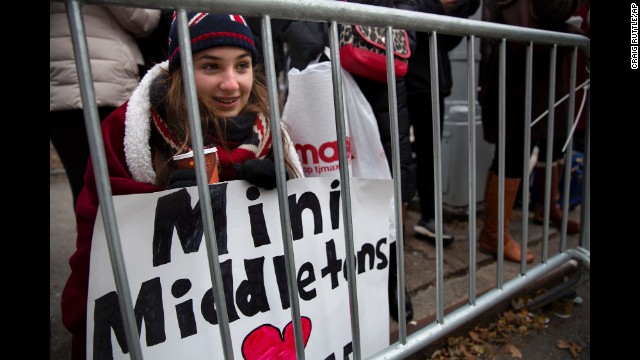 Lauren Nichols, of Chardon, Ohio, huddles in the cold while she waits to see the duchess December 8 in New York. 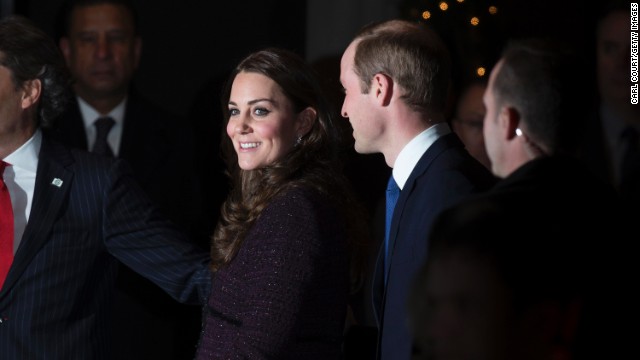 The two were treated to a dance, storytelling, and musical performance by people involved with both centers. William was seen tapping his feet to music that accompanied a hip-hop dance show.

One performance by Steven Prescod, which told the story of how his father was incarcerated and how he faced his own possible jail term, impressed William so much that he offered to help bring the story to a mainstream audience.

"William said he wanted to help me put this together. He gave me his contact number and said to reach out to him," said Prescod, 22, of Brooklyn. He said the Duke and Duchess' visit "brought hope."

After the show, William he congratulated the group. "That was incredible, guys. It was amazing and should be on in the West End," referring to an area in London where several professional theaters are located. "It nearly had me in tears," he admitted.

William also paid a visit the Empire State Building Tuesday afternoon, accompanied by Mayor Bill de Blasio. The day's earlier heavy rain subsided and William walked the entire perimeter of the observation deck of the famous 86-story landmark, stopping to point out other landmarks and sights. Red, white, and blue lights had been adorning the top of the building in honor of the Royal visit.

On Tuesday night, the Duke and Duchess attended a benefit dinner celebrating the 600th anniversary of the University of St. Andrews in Scotland, held at the Metropolitan Museum of Art.

Crowds of onlookers lined up three deep to watch the couple exit their car on the corner of 82nd Street and Fifth Avenue.

After the royal pair ascended the steps to the museum, they were greeted by a group of eight recent St. Andrews alumni, who were dressed in the traditional red robes worn at the college. Kate made a gesture suggesting she remembered the robes from her time at school.

Kate wore a Jenny Packham dress that she has worn to several other galas before. William wore a classic black tuxedo.

Excitement in the street

William and Kate arrived in New York City Sunday evening for their three-day trip -- their first visit to the Big Apple.

Reporting from New York Monday morning, CNN royal correspondent Max Foster said Kate was the star of the show. Screams greeted the Duchess of Cambridge when she arrived at a children's craft group in Harlem, greeted by the first lady of New York City, Chirlane McCray, amid tight security.

Meanwhile, William jetted down to Washington for a quick visit with President Obama at the White House. The visit underscored "the special relationship" between the United States and the United Kingdom, the White House said.

After speaking at a session of the World Bank about the need for an international effort to stop illegal wildlife trading, William jetted back to NYC, on a flight whose passengers also included CNN's Anderson Cooper.

The Duke and Duchess of Cambridge also chatted with Hillary and Chelsea Clinton at a Royal Foundation reception Monday evening and even met Jay Z, Beyonce and King James -- also known as basketball star LeBron James -- at a basketball game at the Barclays Center in Brooklyn.

They also got a look at American-style protest as demonstrators marched outside Barclays Center in Brooklyn to show their anger about the lack of an indictment in the Eric Garner chokehold death.