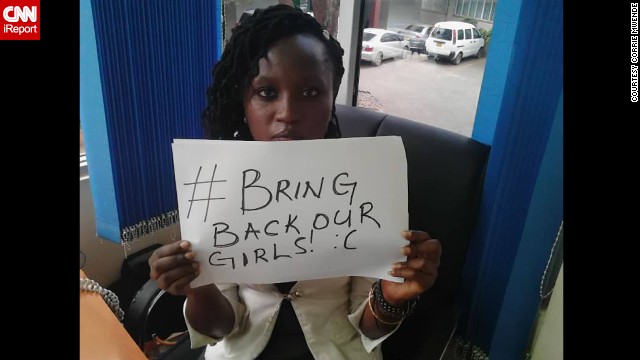 Weeks after the April 14 kidnapping of more than 200 Nigerian girls, worried families and supporters blamed the government for not doing enough to find them. Their cries spread worldwide on social media under the hashtag #BringBackOurGirls. From regular people to celebrities, here are some of the people participating in the movement. 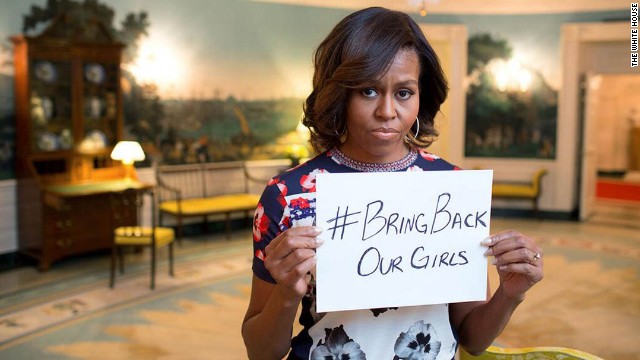 First Lady Michelle Obama tweeted this picture of herself holding a #BringBackOurGirls sign in support of the schoolgirls abducted by Boko Haram in Nigeria. 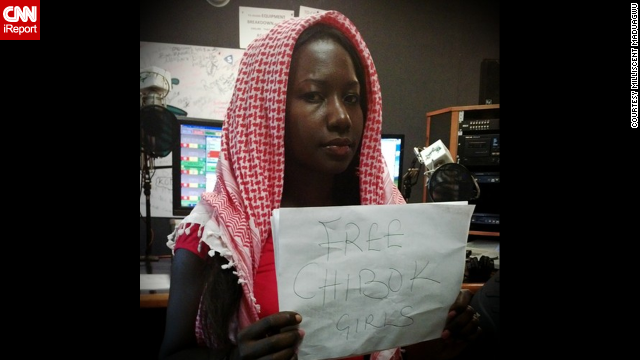 "We hear it like it's not happening in our region so it doesn't concern us but that's not right," says Milliscent Maduagwu from Port Harcourt, Nigeria. "This fight on terrorism is not just the Commander in Chief's and the army, but ours as well!" 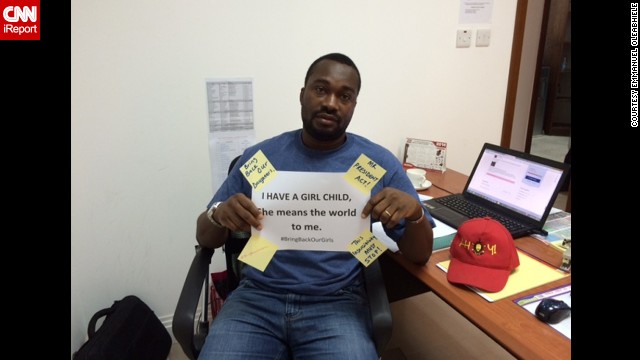 "These girls could have been my sisters or worst still my daughter," says Emmanuel Oleabhiele from Doha, Qatar. "My daughter is 6 months old and I fear for her future as a Nigerian." 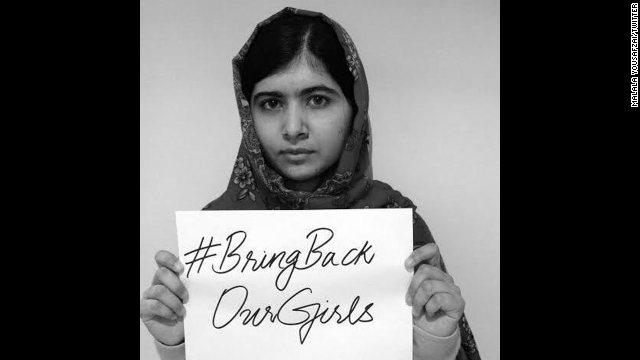 Malala Yousafzai, the world's most famous advocate for girls' right to education, says that "girls in Nigeria are my sisters." This photo was posted to the @MalalaFund Twitter account on May 6. 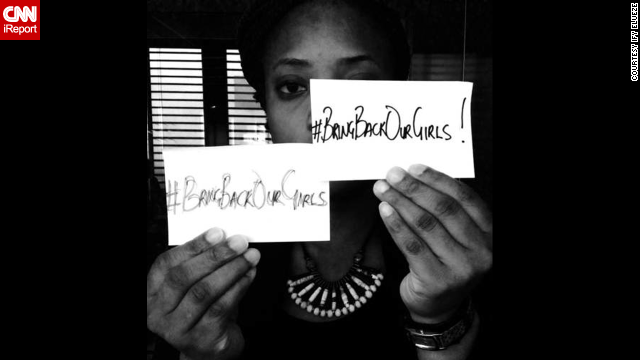 Ify Elueze of Bonn, Germany, asks, "How can the world sit and watch?! It is no longer just the responsibility of the Nigerian government, now it is your responsibility and mine!" 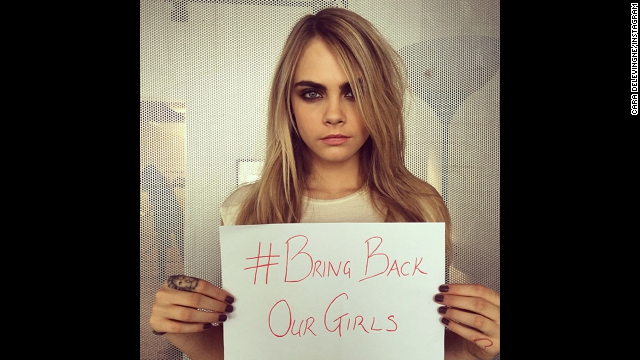 British supermodel Cara Delevingne posted this photo on her Instagram account saying, "Everyone help and raise awareness #regram #repost or make your own!" 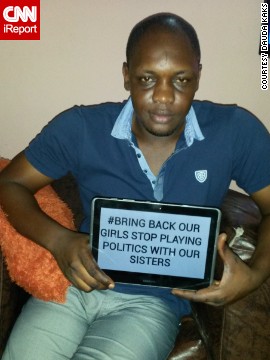 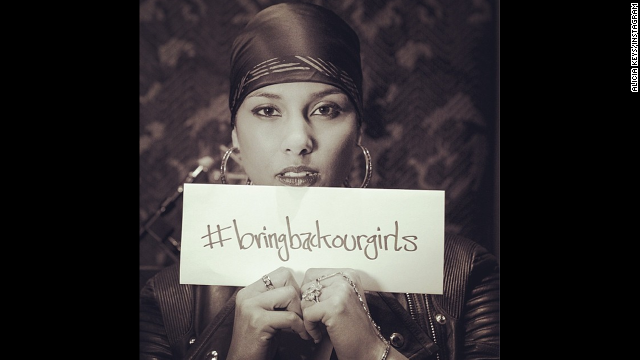 American singer-songwriter Alicia Keys posted this photo on her Instagram account with this message: "I'm so saddened and enraged that these girls are not back where they belong! Safe at home and at school! Safe with their families! Safe to become the incredible leaders and powerful voices they are yet to be." 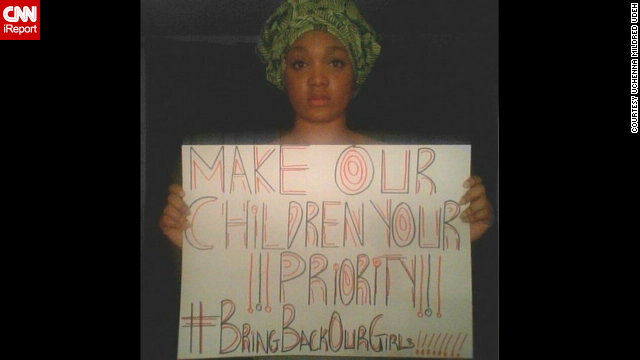 "You are most likely thinking to yourself, 'What's the point in posting another picture or status to speak about this issue?,"' says Uchenna Mildred Udeh from St. John, New Brunswick. "I can tell you this: it will. Do not underestimate the power of your voice. We have to make this personal." 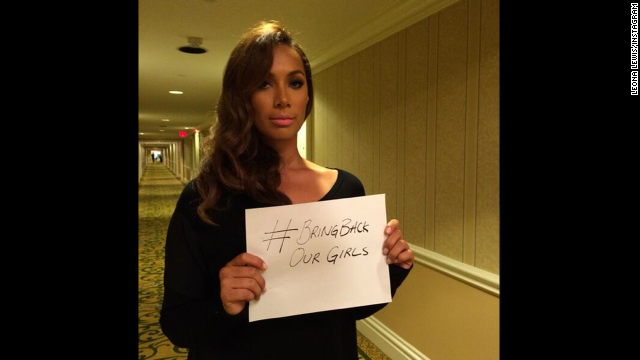 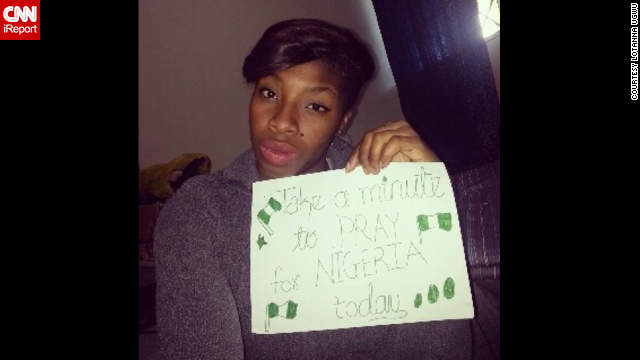 "I think it's high time we all start praying for Nigeria and stop complaining," says Lotanna Ugwu from Abuja, Nigeria. "It's only God that can touch the hearts of those who kidnapped the young girls." 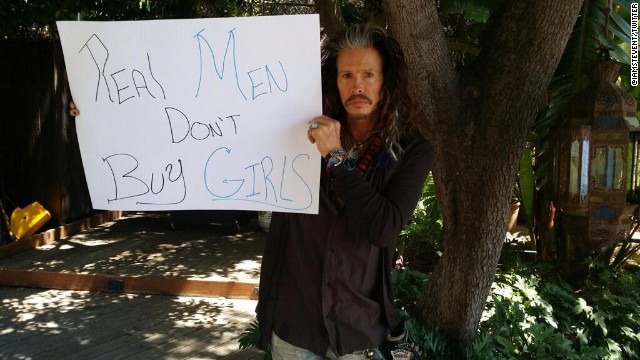 (CNN) -- It would be dishonest to say that 2014 has been a good year for women. We looked in disbelief as a terrorist group in Syria and Iraq turned women into slaves, and another radical group in Nigeria captured hundreds of female students and disappeared with them.

But 2014 was also a year in which many women fought back and inspired the world with their bravery and savvy. They taught us that the stakes are high and the road to a better future is fraught with difficulties, but with strength and dignity, we can get there.

Here are some of the women who in 2014 stared down the odds, helped change history, or changed our perceptions.

1. Vian Dakhil and the Kobani women who fought ISIS

The most enduring and inspiring images of 2014 come from the besieged city of Kobani, the Kurdish town on Syria's border with Turkey where ISIS, also known as the Islamic State, met unexpectedly fierce resistance. ISIS militants, who have brutalized girls and women, knew they would face opposition but did not expect Kobani's defending army to include large numbers of women. Women make up about one-third of Kobani's defenders and are part of a dramatic effort by female residents in Iraq and Syria to turn the tide against ISIS's misogynistic extremists.

It was Vian Dakhil who captured the world's attention by telling her fellow members of the Iraqi parliament about the impending genocide of the Yazidis. There were also women in Mosul, Iraq, who gave their lives fighting against ISIS in other ways. Their collective message? They would do everything possible to stop ISIS from reviving the practice of selling women into slavery.

Fighting by the fallen in Kobani

International attention on Ebola -- and panic that it will spread in the West -- has waned. But the battle to stop Ebola in West Africa continues, and the front lines are guarded by women, mostly nurses risking their lives to care for the ill. The story of Sierra Leone's Josephine Finda Sellu, showed the incredible courage and commitment of the task. She recalled more than a dozen nurses in her staff already dead, wondering how many more would perish.

Most of those fighting the disease are Africans, but Western volunteers have joined, also doing heroic work. They included Kaci Hickox, a Maine nurse who found herself at the center of a politicized dispute when she returned home. Hickox refused to allow politicians and public health officials give in to public fears. By refusing to sit quietly in an airport isolation tent, and later in home quarantine, she forced Americans to look more clearly at the risks and helped put an end to the overblown panic.

When hundreds of Nigerian girls were kidnapped by Boko Haram, the Islamist radical group, Nigerian women needed help to resolve the crisis. Oby Ezekwesili was one of the key figures who helped launch a viral campaign, #BringBackOurGirls, that took the Twitterati by storm and got the world's attention.

Some of the girls managed to escape, and bravely told the horrifying story of their captivity. The threat from Boko Haram is no longer secret. Neglect by the central government is harder to conceal, and the search is not over. Hope for their return is not lost.

When it comes to defying those who would stop women's equality, the foremost icon is Malala Yousafzai, the Pakistani girl shot in the head by the Taliban to stop her efforts to help girls attain education. Malala survived and kept up her mission. She and Kailash Satyarthi, an Indian children's rights advocate, won the Nobel Peace prize together. She is the youngest person in history to win the award.

5. Barbara Bowman, Joan Tarshis and others came out against Cosby

More than a dozen women have come out accusing Bill Cosby, a beloved television personality, of sexual assault and rape. Women such as Barbara Bowman, Joan Tarshis, Janice Dickinson, Judy Huth and others.

Perhaps what's most surprising is that these accusations are not new but that the world had not taken them seriously. Nothing has been proved in a court of law, but the women, whose voices are finally being heard, have created an important zeitgeist moment. Sexual assault by anyone, even powerful people, is simply not acceptable. These women are breaking down the barriers for others to come out and tell their stories.

When Indian scientists and engineers put a rocket into orbit around Mars, mission control exploded into cheers. Among them were scores of women in colorful saris. India's space program is drawing worldwide accolades, and many of the people responsible for its success are Indian women. Bravo!

For decades, women were relegated largely to supporting role on U.S. television. That has changed, with strong women now playing the lead in several prime time shows. The small screen is suddenly filled with powerful, multidimensional characters -- women whose lives are not centered on the men in their lives.

There's Olivia Pope, the lead character played by Kerry Washington in "Scandal," from producer Shonda Rhimes. There's Alicia Florrick, played by Julianna Margulies in "The Good Wife," from producers Robert and Michelle King. And there's Elizabeth Faulkner McCord, played by Tea Leoni, in "Madam Secretary," a show created by Barbara Hall. The landscape of television is being transformed -- we now have new role models not to mention more interesting programming.

8. Taylor Swift and Sofia Vergara know how to build empires

Women may have performed for a long time, but the phenomenon of women taking charge of their careers and building empires is newer. Talented, entrepreneurial women are creating entertainment empires with themselves at the center.

This year, Taylor Swift seemed to have been everywhere while her album is the biggest of the year in copies sold. Meanwhile, Sofia Vergara remains the highest paid actress on TV for a third year in a row. They have become powerhouses, expanding their reach and their influence.