One challenge for Ferguson grand jury: Some witnesses' credibility

(CNN) -- The grand jury in the case of Michael Brown's shooting didn't just face an onslaught of witnesses with conflicting memories of what happened the day white police officer Darren Wilson killed Brown, an unarmed black teenager. It also heard from witnesses who couldn't be believed at all.

Some admitted lying. Others changed their stories under questioning. Prosecutors were so skeptical of one woman's account that they asked whether she might have dreamed about seeing the confrontation in Ferguson, Missouri, on August 9.

Most of the dozens of witnesses who testified likely did their best to describe what they saw, but a review of thousands of pages of grand jury documents shows that untrustworthy testimony came from some witnesses on both sides.

"It's no surprise that some people did not tell the truth in this or any other grand jury," says CNN legal analyst Jeffrey Toobin.

The unreliability of eyewitness testimony

Ferguson Unrest -- How did we get here?

What is unusual in the Ferguson case is that prosecutors chose to call so many witnesses, including some whose credibility they doubted.

"Usually, a prosecutor applies her own screen to the witnesses -- and only introduces evidence that she believes will be credible and believable," says Toobin.

Analysts differ over why prosecutors called witnesses with questionable credibility. Some say the prosecution wanted to present a jumbled case, to help Wilson. Others say the intense scrutiny and likelihood of a separate federal probe make it common in some places to toss anything and everything at a grand jury probing a controversial police killing -- even witnesses who prosecutors believe aren't likely to tell the truth.

Documents from the Ferguson grand jury

CNN's examination of thousands of pages of grand jury documents turned up several examples of testimony that came with little to no credibility. Here's a look at some examples:

Witness 35 said Brown was "on his knees" when Wilson shot him in the head.

Under questioning, however, his testimony fell apart.

"What you are saying you saw isn't forensically possible based on the evidence," a prosecutor said.

The witness acknowledged making up testimony.

"Are you telling us that the only thing that's true about all of your statements before this is that you saw that police officer shoot him at point blank range?" a grand juror asked 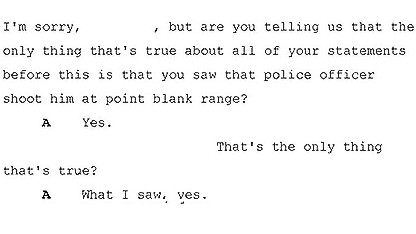 Witness 40's testimony supported Wilson's version of events. Yet prosecutors questioned whether she was even in Ferguson on the day Brown was killed -- and they asked her about a racist post online that would diminish her credibility as an impartial witness.

Video from that day shows no sign that her car was there, and the way she claims she drove home is physically impossible, authorities told her.

In later testimony, Witness 40 changed her story about some of what she saw and admitted to having gathered some details from news reports. She also gave a different reason for having allegedly been in Ferguson that day, and shared part of a journal that she claimed to have kept.

On the day of the killing, she posted a comment online saying, "They need to kill the f---ing n-----s. It is like an ape fest," the grand jury documents say. (CNN is redacting the "f" and "n" words, but she used them in full.) She also organized a small group helping raise money for officers, including Wilson -- a group she said was created as a result of this incident.

She also said she is bipolar, takes medicine for migraines, and has memory problems.

"Is it possible, do you think, that you dreamed about this after it happened and it feels real to you that you were up there?" a prosecutor asked. The witness insisted she knew it was real. 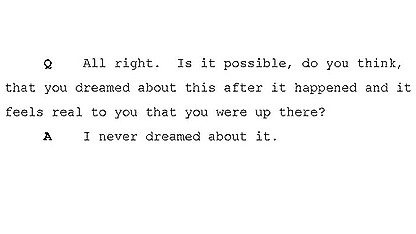 Prosecutor: 'Did you see this at all?'

Prosecutors called Witness 22 to explain that she lied to investigators and never witnessed the incident.

"You gave two statements, were both of those statements true?" a prosecutor asked.

She said she was actually passing along what her boyfriend told her he saw.

Prosecutors also played the grand jury a 10-minute police interview with a man who claimed to have witnessed the shooting. Then they played a phone call in which the man admitted that he actually had not seen the incident.

Another witness insisted another officer was with Wilson at the time of the shooting. (By all other accounts, Wilson was the only officer present when he shot Brown).

This witness described having a clear view of what transpired despite there being a building between the witness' location and where the incident took place.

"We all know people can't see around corners, right?" the prosecutor asked. 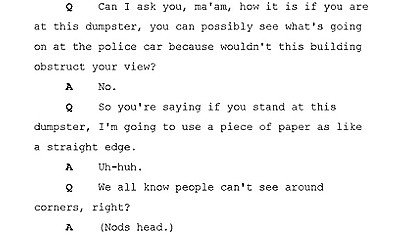 Another witness -- number 37 -- testified to seeing events that are hard to believe. He said that during a confrontation at Wilson's vehicle, Wilson shot Brown point blank in the chest -- but that Brown did not fall over and was not clearly bleeding as he ran away.

The witness also gave differing accounts as to how many shots were fired.

"You told three different stories in the time we've been here today. So I want to know which one is really your memory or did you see this at all?" a prosecutor asked.

Witness 37 posed an intriguing question to the prosecutors.

"If none of my stuff is making any sense, like why do y'all keep contacting me?" the witness asked.

We posed that question to CNN legal analysts. Why did prosecutors present evidence from witnesses with shaky credibility?

Sunny Hostin, a former federal prosecutor, believes the state wanted to avoid presenting a clear-cut case that would have led to an indictment. "Prosecutors generally present very streamlined cases to the grand jury," she says. "As a prosecutor you should not present witnesses in front of the grand jury that you wouldn't present at trial."

The prosecutors didn't want to indict. That's why they conducted it that way.
Sunny Hostin, CNN legal analyst

"The prosecutors didn't want to indict," Hostin says. "That's why they conducted it that way."

The chief prosecutor's goal was "to avoid the argument that he customized the presentation for a particular result -- even though he had to presume, as it turned out, that he would still be criticized for that," O'Mara said.

Some prosecutors "use grand juries to provide political cover for the dismissal of difficult and controversial cases which the prosecutor knows will be lost at trial due to weaknesses in the available evidence," Callan says. These cases may involve police or civilians, such as "a store owner who shoots a robber under somewhat questionable circumstances or a father who kills the rapist of his daughter when he should've relied on the police.

"McCulloch's approach in presenting virtually every shred of existing evidence to the grand jury is unusual but not unprecedented," Callan said.

There is an awareness that the omission of any evidence may subject the prosecutor to future public criticism by either the family of the victim or by the police officers involved.
Paul Callan, CNN legal analyst

Some prosecutors in New York, for example, present virtually all evidence to grand juries in cases of police shootings, Callan said, citing a former high-ranking fellow prosecutor from another office.

"Cop shooting cases are always highly controversial and there is an awareness that the omission of any evidence may subject the prosecutor to future public criticism by either the family of the victim or by the police officers involved," Callan said.

Also, "virtually all of these cases now result in subsequent civil litigation where the record of the prior investigation will be closely examined and possibly publicized."

Local prosecutors know that federal authorities might open an independent investigation -- as they have in Ferguson, Callan says. Federal investigators will obtain copies of the grand jury presentation and "an unfair or incomplete presentation may subject the prosecutor to criticism."

Analyst: Process, not necessarily result, is in question

As it is, prosecutors have hardly escaped criticism for throwing so much at the grand jury in Ferguson.

Given the evidence that came out, I think the exoneration may well be justified. But I don't think the process inspires a lot of confidence.
Jeffrey Toobin, CNN legal analyst

"I actually think the result -- no charges -- is defensible. But I don't think the process he (McCulloch) followed was appropriate," says Toobin, who also is a former prosecutor.

"The best thing the criminal justice system can do is treat everyone the same," he says. "And the process that the prosecutor used -- using a grand jury, which is rarely used in any kind of setting, and throwing all the evidence, rather than a selection of it, before the grand jury -- almost seemed to dictate the result, which was an exoneration."

Still, Toobin says, the evidence shows that a conviction would have been very unlikely had the case gone to trial.

"Given the evidence that came out, I think the exoneration may well be justified. But I don't think the process inspires a lot of confidence."

Follow our complete coverage of the protests and aftermath of the shooting of Michael Brown in Ferguson, Missouri.
Some witnesses lied, changed their stories
updated 3:53 PM EST, Sun December 14, 2014

The grand jury in the case of Michael Brown's shooting heard from witnesses who couldn't be believed at all.
Four mothers share pain of losing sons
updated 9:12 PM EST, Fri December 12, 2014

Their sons have become symbols of a raging national conversation about police brutality and racial injustice.
Barkley: Not all profiling is wrong
updated 6:30 PM EST, Mon December 8, 2014

Charles Barkley -- who once said he doesn't create controversies, he just brings them to our attention -- is at it again.
The hug shared around the world
updated 10:16 AM EST, Mon December 1, 2014

It's the picture we needed to see after a week like this.
Darren Wilson resigns
updated 1:07 PM EST, Sun November 30, 2014

The resignation comes five days after a grand jury decided not to indict the Ferguson, Missouri, police officer for killing Michael Brown.
'Racism without racists'
updated 9:32 AM EST, Thu November 27, 2014

In a classic study on race, psychologists staged an experiment with two photographs that produced a surprising result.
What witnesses told the grand jury
updated 8:00 PM EST, Wed November 26, 2014

Did Officer Wilson shoot Michael Brown dead as he staggered to the ground, hobbled by gunshot wounds? Or, did the 18-year-old aggressively charge at Wilson?
Officer Wilson: 'I did my job right'
updated 7:59 PM EST, Wed November 26, 2014

News about the grand jury's decision not to indict Wilson spread quickly nationwide, spurring spontaneous rallies. See a collection of reactions from across the country.
Are the protests near you?

If you are in Ferguson or have witnessed protests where you live, share your story with CNN. Personal essays and video commentary are also welcome.
What Darren Wilson told the grand jury
updated 6:45 PM EST, Tue November 25, 2014

Photos of Officer Wilson taken after his altercation with Michael Brown have been released.
What's next for the Michael Brown family?
updated 7:34 AM EST, Tue November 25, 2014

His mother ran down the street, tears streaming down her face. His father said he was "devastated."
How prosecutor defended grand jury's decision
updated 7:13 AM EST, Tue November 25, 2014

All eyes and ears were on St. Louis County Prosecuting Attorney Robert McCulloch when he announced there would be no indictment.
Who's who in Ferguson
updated 7:01 PM EDT, Wed August 20, 2014

As tensions in Ferguson, Missouri, have bubbled, one official after another has taken the lead, grappling to figure out how to stop it from coming to a boil.
Photos: Protests in Ferguson
updated 10:34 AM EDT, Fri August 22, 2014

"He was funny, silly. He would make you laugh. He'd bring people back together," his father, Michael Brown Sr., told reporters.