Are school meals the new gourmet cuisine in Tanzania? 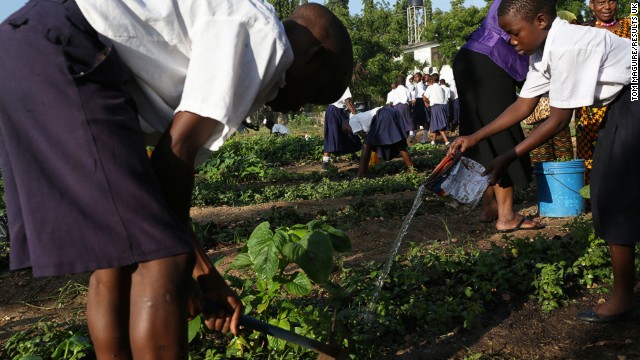 The children of Mbuyoni primary school in Dar es Salaam dig and water the crops in their school garden. Since 2011, the school has grown and cultivated its own vegetables. 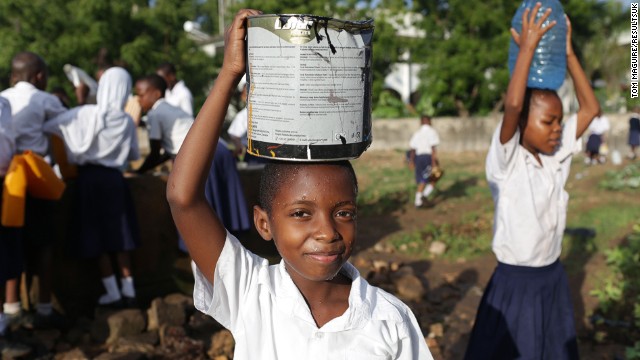 A child carries a pale of water for her crops. 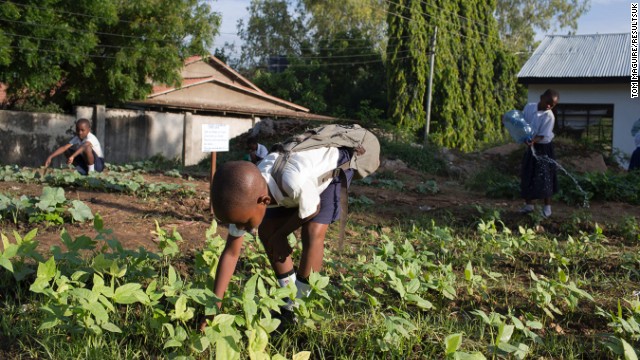 Students of Mbuyoni primary school pick vegetables to be cooked for lunch that day. 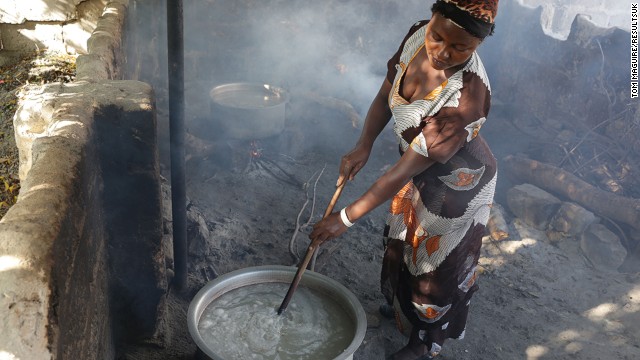 Freshly picked vegetables are prepared on site at the school each day in a new era of school meals. 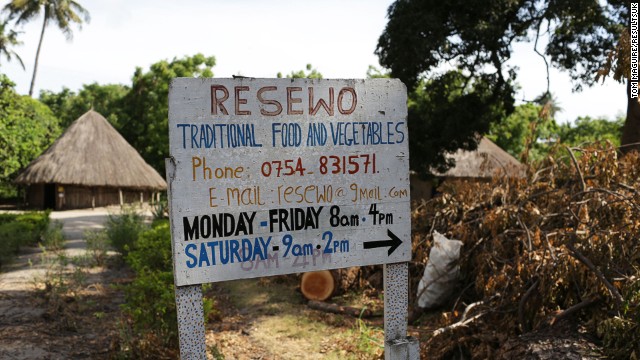 The RESEWO senior women's group of Tanzania are working with schools across Dar es Salaam to put indigenous vegetables back on the menu. By working with school children they hope to spread word among the next generation as well indirectly impact local communities. 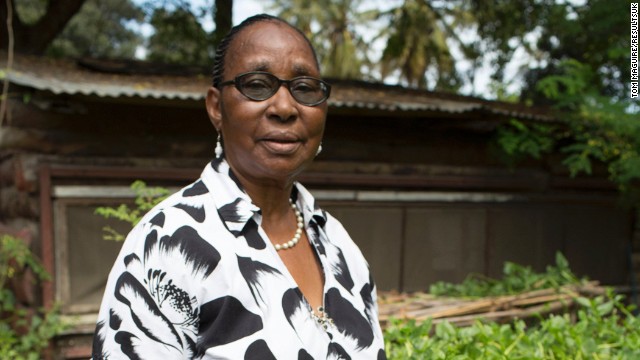 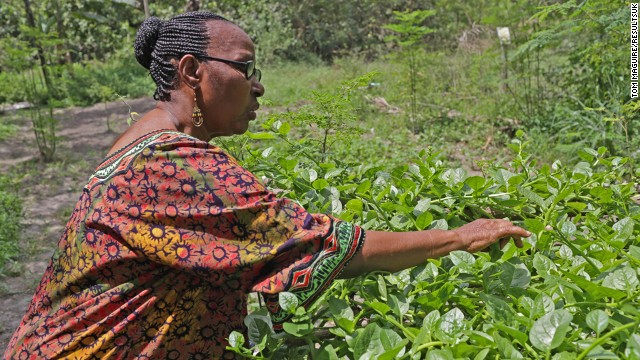 Freda Chale picks fresh greens at the RESEWO headquarters in Dar es Salaam. She has led the organisation since its formation in 2007. 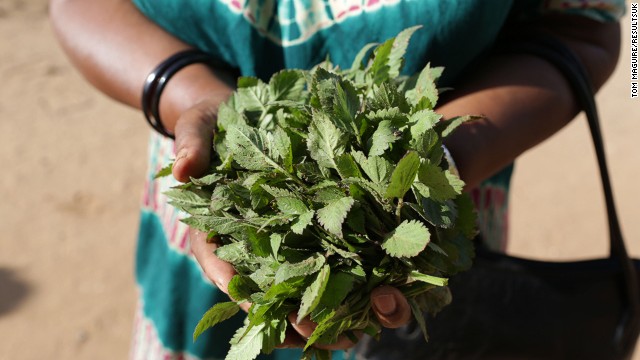 Indigenous plants are high in nutrients and minerals, including iron. Often mistaken for weeds, the women of RESEWO aim to increase awareness of these crops which grow readily across Tanzania. 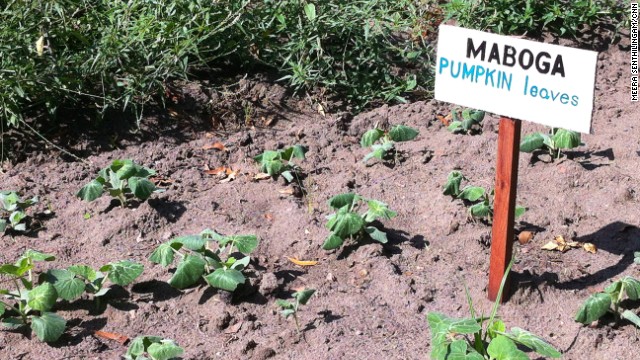 Pumpkins grow in the RESEWO city garden in Dar es Salaam. Both pumpkins and pumpkin leaves are good sources of nutrients and can be incorporated into multiple recipes.

The RESEWO women drink tea at their headquarters in Dar es Salaam. The women formed the organization one afternoon whilst drinking tea made from leaves growing in the garden of founder, Freda Chale. 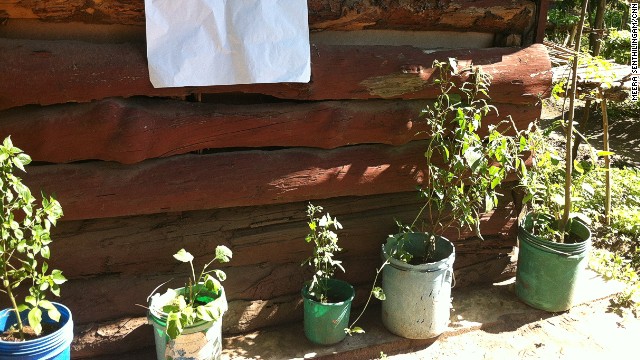 (CNN) -- It's 06:30am and the sun has just risen over the bustling gardens of Mbuyoni elementary school, in the coastal city of Dar es Salaam, Tanzania.

On this sunny morning, fits of giggles and screeches of laughter fill the hot and humid air, as would be expected in most schools around the world. But the source of fun is somewhat less expected -- farming.

"I like to grow blackjack, fame flower, pumpkin leaves and sweet potatoes," explains 11-year old Zulfa Mussa in her native language of Kiswahili.

Mussa is new to the world of agriculture and has enjoyed cultivating her favorite crops this morning. "I didn't know they were edible and now I know, I eat them." In fact, she eats them for lunch, along with the rest of her school.

Mussa's school is putting African traditions back on the menu in a new era of indigenous school meals. Plants native to her home country, Tanzania, are being harnessed as a result of an idea pioneered by people at the other end of the age spectrum -- retired women -- the Regent Estate Senior Women's Group (RESEWO).

Native plants such as blackjack, moringa, pumpkin, sweet potato and even the leaves of these latter two plants, have high nutritional and medicinal value. But, they're under-appreciated by the communities in which they grow, often dismissed as weeds.

One afternoon in 2007, Chale invited her senior peers for tea which was made from the leaves in her garden. That day her mission to save gastronomic traditions began. And it began with children.

"We started working with schools to make sure youngsters grow up valuing these vegetables," says Fabia Schundia, a RESEWO founding member. The children learn by growing and cultivating the plants at school and go on to spread the word to their families and communities. "They don't know most of the time, especially people living in towns."

The elementary school at Mbuyoni has over 1200 students, all of whom appear to have come in at the crack of dawn to tend eagerly to their crops. There are groups of children tilling land, whilst others collect water from the well or wander around with watering cans. A final few harvest leaves and roots to be eaten for lunch that day. This is the atmosphere every morning, I'm told.

The garden spans one sixth of the school's land and began development over three years ago. The school also has a kitchen on site for immediate preparation of the freshly-plucked ingredients.

"In the morning session, normally we have time to clean the environment and take care of our garden," says school headmistress, Dorothy Malecela. She has seen the impact the garden has had on the general health and well-being of her pupils. "It increased school enrollment and reduced dropout because the kids are happy to come in," she says.

RESEWO currently works with 10 schools in Dar es Salaam, but hopes for the indigenous food movement to spread across the country.

The need for improved nutrition

Among the 8 million children under five years old estimated to be living in Tanzania, 42 per cent are stunted and 16 per cent are underweight, according to UNICEF. Levels of anemia are also high, with rates as high as 41 per cent in adult women.

One cause of this is the increasing reliance on staples such as maize and sweet potatoes. Another cause is that locals have been eating more food high in fat and sugars, such as burgers. Plants with higher nutritional value, including the leaves of the sweet potato plant, seem to have been forgotten.

Improving diets is a national concern, but for the women at RESEWO, their goal is to get people appreciating the food directly under their nose.

"In the villages, most of these vegetables grow as weeds," says Schundia, who worries that people don't even seem to use them when they have nothing to eat. By raising awareness into growing indigenous plants, the team hope to get people harnessing these plants as year-round sources of food on their doorstep.

It's all in the taste

As Schundia wanders around the community garden at the RESEWO headquarters, she eagerly shows the tens of vegetable varieties growing there, one of her favorite being the bitter leaf. "You prepare it, wash it, cut it in small pieces, fry it and season it as you wish. It's very tasty." The leaves can also be consumed in the form of tea. Utility and versatility appear to be commonplace.

Furthermore, the leaves of a sweet potato plant are high in protein, fiber, and minerals such as iron. The more local blackjack plant also contains vitamins and minerals and has traditionally been used as medicine to overcome anemia. Insight into these plants, and many more, have been compiled into a recipe book put together in association with the slow food foundation for biodiversity, an Italian-based NGO promoting environmentally and culturally sustainable agriculture.

The nutritional and medicinal value of indigenous plants is being forgotten across the continent and the slow food foundation now work in over 10,000 gardens in Africa, including RESEWO's headquarters.

The movement to revamp and revitalize ancient plants has begun. It also appears to hold the secret to youth. As Schundia explains the health benefits of improved nutrition, she grins and asks: "How old do you think I am?" Without a wrinkle on her face and the energy of someone in their prime, she reveals she is 74 years old.

Maybe that should be the opener to get anyone hooked. 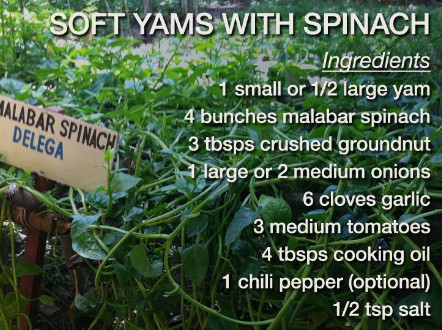 1. Wash yams thoroughly and peel. Wash again and cut into pieces the size of an egg.

2. Place yams in a saucepan of water that doesn't quite cover them and put on the heat.

3. Wash and chop onions, tomatoes and chili (optional) and add to the yams with salt; cover and leave to boil.

4. Add oil or groundnut milk, continue to cook until yams are soft.

5. Add the washed vegetable leaves, cover and leave to cook until ready.

READ MORE: Nigeria's star architect on how she made it