Twitter access in Turkey is restored, according to network monitoring firm
Alibaba is launching a ChatGPT rival too
Welcome to the "generative AI" era. Resistance is futile
Something isn't loading properly. Please check back later.

The ‘Wind Tree’ that could heat your home

Phoebe Parke, for CNN
Updated 10:37 AM EST, Wed January 21, 2015
Link Copied!
French company NewWind has taken the idea of green energy very literally. Inspired by nature, its "Wind Tree" has 72 "leaves" -- micro-turbines that rotate in the wind, generating up to 3.1kW of energy.
Colucci/NewWind
A "Wind Tree" will go on display at Place de la Concorde, Paris, between March 12 and May 12 2015.
NewWind
Its creator, Jerome Michaud-Larivire, with one of the micro turbines.
FRED TANNEAU/AFP/Getty Images
But the French design isn't the first to combine wind power with a tree structure. Described as an "urban windmill," the "Power Flower," by NL ARchitects, has been designed to minimize space requirements. Having turbines on a vertical axis allows for a much denser construction than with conventional wind turbines.
NLA Architects
NL Architects claim the concept is nearly silent and its turbines can produce energy from wind blowing in any direction. This rendering shows how it foresees that with the emergence of smart grids, products such as this will become a domestic energy solution.
NLA Architects
At Singapore's "Gardens in the Bay" development, man-made "supertrees" collect solar energy during the day, which is used to light the magnificent structures after night fall.
Courtesy Glen Obejera Espinosa
Eighteen supertrees varying from 25 to 50 meters in height combine to form a steel forest. They act as cooling ducts for nearby conservatories, collect rainwater and 11 of them have solar photovoltaic systems to convert sunlight into energy.
Courtesy Glen Obejera Espinosa
In contrast to the dense urban environment of skyscrapers and high-rise buildings in Singapore, "Gardens by the Bay" is part of the government's overall strategy to transform Singapore into a "city in a garden."
AFP/Getty Images

Editor’s Note: The Art of Movement is a monthly show that highlights the most significant innovations in science and technology that are helping shape our modern world.

The "leaves" are mini turbines and together could power 15 streetlights

From a distance this may look like an ordinary tree, but get closer and you will discover it is actually a power generator.

French company NewWind has created the “Arbre a Vent” or “Wind Tree,” a 3-meter-tall generator designed for urban environments which makes the most of smaller air currents.

Operating in near complete silence, the wind tree consists of 72 micro turbine “aeroleaves” that rotate in the wind, generating an estimated 3.1. kW of power.

While this isn’t much compared to industrial-sized turbines, which typically generate in the region of 1 - 3MW, having multiple smaller turbines has its uses.

“Urban wind is not very strong, but it is very turbulent,” says “Arbre à Vent” engineer Julia Revuz. “These turbines need less wind to get started and produce around 3kW of energy, which could heat a small home, fuel lights or charge an electric car.” 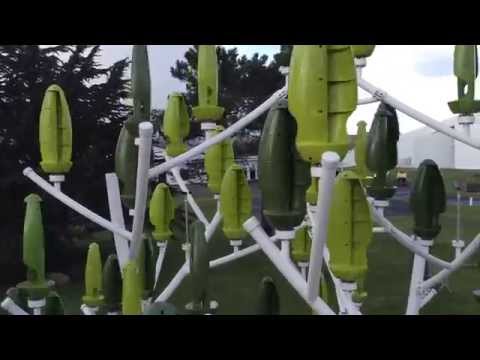 NewWind was founded by Jérôme Michaud-Larivière three years ago when he had the idea for the Wind Tree while taking a walk. He saw the leaves on a tree moving in the wind and started thinking about the possibility of turning that kinetic energy into electricity.

The current prototype of the tree is steel and the energy made from it goes into the electricity grid and is used locally.

“We haven’t yet optimized the structure,” says Revuz. “We are hoping to make the leaves out of eco-friendly materials and for the tree to have as a low a carbon footprint as possible.”

A 12-meter tall prototype of the tree will be on display from March 12 for two months at Place de la Concorde, a major public square in Paris.

This prototype, which weighs around 5 tons and costs roughly $35,000, is to be used as an educational tool and will aim to show the public the technology behind the structure. The wind tree will be mass produced for sale from March 2015 and NewWind says it has raised €1.15 million ($1.34 million) to begin pre-production.

“The reaction has been very positive so far,” explains Revuz. “People don’t know how it works but they like it, they find it magical.

“There is a very negative view of wind energy, people think it’s ugly and it ruins their landscapes. Then they see the wind tree and they think differently.”

NewWind has had interest from local government in France and Europe, as well as real estate agents and businesses that want to have the tree on their land. There are even talks about another demonstration tree in London next year.

The Wind Tree may not be affordable and practical for everyone, but there are other applications that could be more accessible.

“Our technology is in the mini wind turbines (the aeroleaves),” says Revuz. “So we are developing other applications for them.

“Architects have been in touch and are interested in using them in their work, perhaps on the roofs of buildings. Mini turbines are cheaper to produce and buy than the wind tree.”

Other ideas for the aeroleaves include rooftop foliage installed on buildings, foliage on roadsides and the smart balcony – where the mini turbines are attached to balcony railings.

However innovative, this is not the first urban energy source inspired by nature – check out the “Power Flower” and others in the gallery above.

Rod Lamkey/CNP/Sipa/Reuters
Republicans held a hearing to prove Twitter's bias against them. It backfired in spectacular fashion
Adobe Stock
Discovery+ is sticking around. It's a strategy shift for Warner Bros. Discovery
Ad Feedback