Mysterious filth rained down on Walla Walla, Washington. Gales knocked trees down – and power out – in Northern California. And then they whirred over Nevada’s mountains with hurricane force.

More rain is on the way.

A new storm marching in from the Pacific promises to leave a total of nearly 10 inches in spots along the coast between Saturday and Tuesday, the National Weather Service said.

That may cause mild to moderate flooding, particularly around rivers and streams.

Already on Friday, some cars got stranded in flooded streets in Washington’s Jefferson County, and some residents exited their front doors aboard inflatable boats pulled by rescue crews.

At 4:58 on KIRO -- Several homes flooded along the Duckabush River in Jefferson County! >> http://t.co/C0DRMsFnDR pic.twitter.com/CaVuTMnPEq

The rain is landing on a chronic, deep drought in California, but flooding and mudslides may become a concern.

Tens of thousands of households lost power on Friday, and limbs had to be cleared from yards, windshields and roofs. As of Saturday afternoon more than 43,000 customers in Northern California still were without power, Pacific Gas and Electric Co. said.

The utility said it called in crews from Oregon and Washington to help restore power to customers.

An ashy rain dribbled onto Washington and Oregon on Friday, and people rubbed a dusty film off of their cars, took photos of their fingers and posted them online.

They described it as “white stuff” or “milky rain.”

"Dirty" rains fell at our office & across much of Spokane. We are looking into source of this phenomena. #wawx pic.twitter.com/akad4Am3M2

Rainwater filling a collector at the NWS in Spokane, Washington, looked like it was pulled from a muddy river.

Some postulated what the source of the grime may be, including the weather service.

Rainwater collected from our rain gauge today. Rather murky. Still not sure why. #wawx #cloudyrain pic.twitter.com/bp225Mfv50

Could the jet stream have tracked it over from the hyperactive Shiveluch volcano in eastern Russia? It pumped volcanic ash 20,000 feet into the sky in late January. The dust settled as far away as the American Northwest.

Then again, there are other active volcanoes that could be the source, including one that belched ash on Wednesday in Mexico.

Or did winds blow up a different kind of ash from last year’s forest fires in Oregon or Idaho? Or was it just dust whipped up by high winds?

“We still don’t have a definite answer,” the service wrote on its Facebook page.

The wind gave Slide Mountain in Nevada a raw shaving, whipping over at 134 mph.

Even in the flat lands around Reno, top gusts over 70 mph threatened to fling over garbage cans and garden furniture.

The NWS Reno recorded a fast-motion video of an usual cloud formed by the high winds called a lenticular cloud. They appear stationary but are very turbulent and jittery. 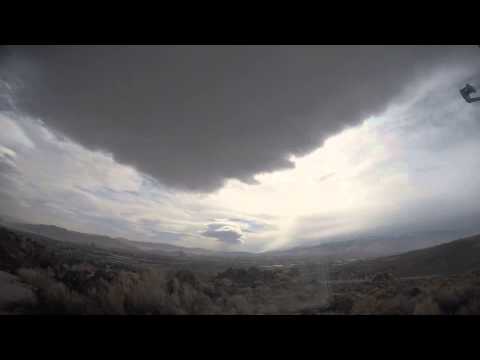 Van Dam said they are sometimes mistaken for UFOs.