Kids as young as 5 concerned about body image

Editor’s Note: Kelly Wallace is CNN’s digital correspondent and editor-at-large covering family, career and life. Read her other columns and follow her reports at CNN Parents and on Twitter.

Kids as young as 5 think their ideal weight is thinner than their current size, according to report

Nineteen-year-old Juliana Lyons calls herself a “confident girl,” and yet she still struggles – every day – with body image.

“I change outfits eight times before I leave. I can’t ever find something that I think I look good in,” said Lyons, a freshman at Azusa Pacific University near Burbank, California.

“I’m just really critical of myself, and I think a lot of people struggle with the same thing, too.”

So a year ago, she and her dad, a music and television producer, wrote a song called “Beautifully Flawed” and decided to record it, with Lyons providing the vocals.

At her parents’ urging, she turned the song into a music video, which she directed, filmed and edited, nearly all on her own. The clip features girls as young as 7 looking into the mirror and clearly not liking the blotches, acne, extra body fat and other imperfections they see. 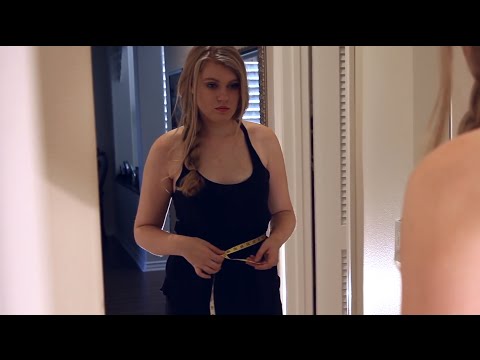 “It’s crazy how we’re so inundated with these images of perfection and … we’re teaching young girls that that’s normal. So people are growing up now with these ideas of how they should look,” said Lyons, who used family and friends as actresses for her short video. (She didn’t want to be in it.)

iReport: The girl in the mirror is my enemy

“It’s setting us up to fail because we’re not perfect. We’re not Photoshopped in real life.”

Kids are starting to develop concerns about body image at younger ages than you might think, according to a recent report by the child advocacy group Common Sense Media.

The report, a compilation of the existing research on how kids and teens feel about their bodies, noted how more than half of girls and one-third of boys as young as 6 to 8 think their ideal weight is thinner than their current size.

By age 7, one in four kids has engaged in some kind of dieting behavior, the report said.

“I think there’s a lot of talk about teens and body image, and many parents become aware of that when kids hit puberty, but kids as young as 5 are already expressing a desire for a body that is thinner than their current self or future self,” said Seeta Pai, vice president of research for Common Sense Media and author of the report.

Fat is the new ugly on the playground

“They already know about dieting, and some might have even tried it out or restricted their food intake at certain times, so that’s pretty alarming,” Pai said. “It’s almost like things are a little too late if you are going to wait all the way until teenage years to talk to kids about body image.”

Most of us parents probably knew already that how we talk about our own bodies could negatively impact our kids. But it’s surprising to see just how early our kids can be affected.

Five- to 8-year-olds who think their moms are unhappy with their bodies are more likely to feel dissatisfied with their own, according to Common Sense Media’s report.

Talking to teens about social media

“It’s certainly not intentional, and that needs to be clear,” said Ana Homayoun, author of “The Myth of the Perfect Girl: Helping Our Daughters Find Authentic Success and Happiness in School and Life.”

Homayoun says moms might not realize the messages they are sending when they struggle with what to wear or what they think they look good in.

“They’ll put something on (and say), ‘Oh, that doesn’t look good on me because I look this way,’ and they’re looking in a mirror,” said Homayoun, who is also the founder of an educational consulting company.

“That’s a very common thing where you have this little girl sitting in the background watching, and she probably thinks you look gorgeous, but then it’s sort of, ‘Well, that’s my mom, and what does that mean for me?’ ”

And it’s not just a girl thing, which is also important for all of us parents to realize. There’s not as much research on boys, but the data that do exist suggest that body image is an issue for boys too, Pai said.

“Boys’ toys, even the action figures that they play with, have body measurements that are bigger than your biggest body builders, and everyone talks about Barbie, but no one talks about that.”

So what can we do to help our young girls and boys deal with body-image concerns?

Pay attention to the issue, says Pai, and start talking to kids early by emphasizing health, not weight, and teaching appreciation for all shapes of people.

” ‘Ban fat talk’ is what we say. Say why you appreciate your own body. Watch what you say about other people’s appearances in front of your kids. … Eat well for your health rather than for your size, because your kid will catch on.”

The beauty patch: Bad for women?

In her book, Homayoun encourages parents to think about body image and health in different ways and to help their children think about them differently, too.

“A lot of the negative body image comes from internal views of oneself, and when you can really shift that conversation from how does someone look to how does someone feel, then kids can really start to think about what their choices are and how they have control over how they feel, and that brings positive self-esteem and self-awareness.”

Pai says we can also “immunize” our kids before the “onslaught of messages hits them” and especially before they have smartphones of their own. That means choosing kids’ entertainment that features diverse characters and questioning any assumptions kids make about what they see.

” ‘Oh, fat people do this, or thin people do that’ – whenever you have an opportunity, question those assumptions,” she said. “So any time there’s an example in media or just in real life, you build the muscles if you will in your kid … so that they can resist the messages that are coming at them.”

Lyons, the college singer/songwriter and director, said the response to her video has been overwhelming since she posted it on YouTube a little more than two weeks ago.

Retired Gen. Colin Powell, the former U.S. secretary of state, posted the video on his Facebook page and encouraged parents to share it with their young daughters. (Lyons’ father’s cousin is married to Powell’s daughter, and Powell’s granddaughter appears in the video.)

“I would love to be a positive influence on girls younger than me and just telling them that, ‘Hey, it’s OK that you feel bad about this, but it’s going to be OK,’ ” said Lyons, who hopes she’ll end up working in the music or film industries.

“I think it’s sad we’re so trained to not like what we see in the mirror, but we’re beautiful even though we don’t think don’t we are,” she said.

As Lyons sings in the video, “Someday I know I’ll stand unafraid of who I am, broken and beautifully flawed.”

What do you think is the best way to help young girls and boys build a healthy body image? Share your thoughts with Kelly Wallace on Twitter or CNN Living on Facebook.