By Emanuella Grinberg, CNN
Updated 12:18 PM EDT, Thu March 19, 2015
Link Copied!
YouTube star Jazz Jennings is part of the ranks of prominent transgender individuals doing their part to increase the community's visibility in the media. The teen activist appeared in Clean & Clear's digital campaign an stars in a TLC reality show about her life.
Emma McIntyre/Getty Images for Unilever/Dove
Former child star J.J. Totah came out as a transgender girl in am essay published by Time magazine. "My pronouns are she, her and hers. I identify as female, specifically as a transgender female. And my name is Josie Totah," Totah wrote.
Randy Shropshire/Getty Images
It was announced in July that transgender actress Nicole Maines had been cast as a transgender super hero, Nia Nal, who is described as "a soulful young transgender woman with a fierce drive to protect others" on The CW's "Supergirl."
C Flanigan/FilmMagic
Ines Rau has become the first openly transgender woman to appear as a Playboy Playmate with her spread in the November/December 2017 issue.
Monica Schipper/Getty Images
Gavin Rossum of the band LCD Soundsystem told Grindr in a July 2017 interview that she's been trying to come out fully as a trans woman for years.
From Instagram
In June, the artist formerly known as Charice Pempengco reintroduced himself to the world as Jake Zyrus. The singer debuted a new look in 2015 after telling Oprah Winfrey in an interview the year before that "Basically, my soul is like male."
Mike Coppola/Getty Images
Zeke Smith was outed as a transgender man on a controversial episode of "Survivor: Game Changers." The 29-year-old asset manager who lives in Brooklyn told People he struggled to forgive fellow contestant Jeff Varner who revealed the information during a Tribal Council.
Jeffrey Neira/CBS ENTERTAINMENT
Caitlyn Jenner, previously known as Bruce, revealed her new name and gender in Vanity Fair in June 2015. Jenner's announcement was called a watershed moment for transgender visibility. She appeared in the reality show "I Am Cait."
FROM vanity fair
Laverne Cox, who was cast as Frank-N-Furter in the "Rocky Horror Picture Show" remake, is the first openly transgender person to be nominated for an Emmy. She appeared on the VH1 reality show "I Want to Work for Diddy" and later produced her own series, "TRANSform Me." She now portrays Sophia, a trans woman in prison, on the Netflix show "Orange Is the New Black." She received the Emmy nomination for that role.
Valerie Macon/Getty Images
Former male model Andrej Pejic revealed to People magazine in July 2014 that she has undergone sex reassignment surgery and is now Andreja.
Jamie McCarthy/Getty Images
Former "Drag Race" contestant Carmen Carrera wants to be the first transgender model to walk the runway for the Victoria's Secret fashion show.
Ben Gabbe/Getty Images
Amanda Lepore is an iconic mainstay on the fashion and New York nightlife scenes. She has been a muse for fashion photographer David LaChapelle.
Cindy Ord/Getty Images
Lana Wachowski was "Laurence" when she and her brother Andy directed films like "The Matrix."
Timothy Hiatt/Getty Images
Producer/director Lilly Wachowski used to be Andy and transitioned after her sister Lana Wachowski.
Frederick M. Brown/Getty Images
Chaz Bono transitioned from Chastity Bono, which is how many fans knew him when he appeared on his parents variety series, "The Sonny & Cher Show."
Angela Weiss/Getty Images
Isis King was a contestant on the 11th and 17th cycles of "America's Next Top Model."
Mike Coppola/OUT Magazine/Getty Images
Lea T is a Brazilian/Italian who has served as a muse for the designer Givenchy. She revealed she was transgender in 2010.
Tullio M. Puglia/Getty Images

Transgender teen Jazz Jennings is having a moment

The transgender community is celebrating several milestones thanks to one teen doing her part for transgender visibility.

Activist and YouTube star Jazz Jennings will star in a reality show debuting on TLC this summer, the network announced last week. “All That Jazz” will feature the 14-year-old and her family dealing with typical teen drama through the lens of a transgender youth.

It’s the latest show to focus on transgender individuals, along with Discovery Life’s “New Girls on the Block” and ABC Family’s “My Transparent Life,” on the heels of Amazon’s Golden Globe-winning comedy, “Transparent.”

“Jazz’s story is universal, yet unique, and we’re proud to partner with her family to share it with TLC’s audience. Jazz may be known as an author and activist, but she’s first and foremost a teenage girl with a big, brave heart, living a remarkable life,” TLC General Manager Nancy Daniels said.

Jazz Jennings and her family will appear in "All That Jazz!" on the TLC network.
Courtesy TLC

Jazz appears in a video for the skincare company sharing the trials of growing up transgender.

“I’ve always known exactly who I am. I was a girl trapped in a boy’s body,” Jazz said in the video, which encourages teens to be “your true self.”

The Internet welcomed the news, applauding Clean & Clear and TLC for giving Jazz a platform.

“All this support is so overwhelming! I love you all so much,” she said in a tweet in response to the outpouring of support.

Then, Jazz lent her image to the NOH8 campaign, a marriage equality movement started in response to California’s Proposition 8 against same-sex marriage.

Why all the fuss?

Recognition of transgender people in the media shows mainstream America “we’re real people,” said Christine Connelly, a member of the board of directors of the Boston Alliance of Gay, Lesbian, Bisexual and Transgender Youth who came out as transgender woman five years ago.

What makes Jazz so “special,” in the words of transgender actor Laverne Cox?

Her trajectory is unique, starting with her early debut in the public eye at a time when stories of transgender people – adults or children – were scarce.

“She was the first young person who picked up the national spotlight, went on TV and was able to articulate her perspective and point of view with such innocence,” Connelly said.

She even co-wrote a children’s book in 2014 based on her experience, “I am Jazz,” about a transgender girl.

Her parents also demonstrated their unwavering support for her early on, something transgender children can’t always count on, Connelly said.

Jazz and her family first appeared in the public eye in a 2007 television interview with ABC News’ Barbara Walters. She was 6 years old and had just started appearing in public as a female, in what the report called “one of the youngest known cases of an early transition from male to female.”

The segment with Walters said Jazz was diagnosed with “gender identity disorder,” a term long considered stigmatizing by mental health specialists. It was eliminated from the American Psychiatric Association manual in 2012 and replaced with “gender dysphoria,” a condition in which people feel strongly that they are not the gender they physically appear to be.

Jazz and her parents said she began gravitating to “girl things” at an early age and insisting she had the wrong genitalia. At home, she wore dresses but in public she wore pants to maintain a “gender neutral appearance.”

That all changed at her fifth birthday party, when she wore a one-piece bathing suit and told her friends she was a girl, her parents told ABC.

The interview catapulted Jazz and her family into the spotlight. Jazz has appeared on various television networks and news outlets, including an ABC update with Barbara Walters at age 11, a segment with Katie Couric, a report on 60 Minutes, and an Oprah Winfrey Network documentary, “I am Jazz: A Family in Transition.”

The exposure has shaped Jazz into a transgender advocate and spokesperson who uses social media to connect with fans and followers. She has more than 20,000 Instagram followers and 33,000 subscribers to her YouTube channel, where she posts her speeches, DIY craft tutorials and musings about being a transgender youth.

Occasionally, she responds to questions in video Q&As, fielding tough questions about her hormone treatment and bullying with grace and ease. She began using testosterone blockers at age 11 to stop her from growing body hair, “or else I would have a hairy beard right now, which I don’t so I’m thankful for that,” she told fans in her most recent Q&A video. 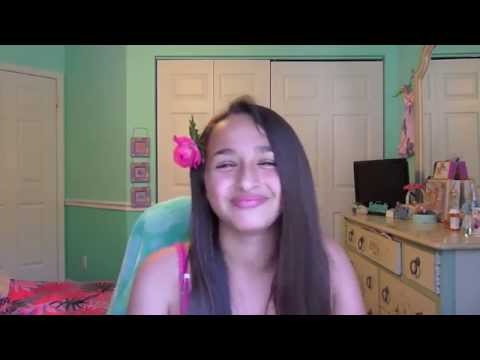 Her outreach has earned her recognition from some of the country’s top LGBT advocacy groups. In 2012 Jazz became the youngest person ever to be recognized in the Advocate’s annual list of “Top Forty Under 40.” She was honored at the 2013 GLAAD Awards and named a Human Rights Campaign youth ambassador in 2014. She also made TIME Magazine’s “Top 25 Most Influential Teens of 2014” and Huffington Post’s “14 Most Fearless Teens of 2014” list.

It may seem like a charmed life but Jazz says she still faces bullying and mistreatment from people who don’t understand her. The comments on her social media accounts are littered with profane attacks on her and her family.

The question came up in her Q&A: “How do you feel when people judge you?”

Clearly, it’s a topic she’s given some thought to.

“I don’t care what people think. The only opinion that really affects me is my own opinion of myself because I determine the way I am, not anyone else,” she said. “If someone says something hurtful to you or makes you feel down on yourself then you just gotta stay positive and keep moving forward because they might not know much about you or they may not understand the situation.”