Ryan Reynolds: My superhero movie will be R-rated

Our favorite movie superheroes (and villains)

Not to be outdone, Hugh Jackman announced he is retiring the Wolverine character

Ryan Reynolds gave us a sneak peek at his new costume last week, and followed it up with a first look on video.

The actor posed on a bearskin rug to show off how he looks as masked Marvel character Deadpool in a post that quickly got positive responses from fans on social media.

The photo is a parody of Burt Reynolds’ famous nude image from a 1972 issue of Cosmopolitan and is very much in keeping with Deadpool’s wisecracking, tongue-in-cheek persona.

(Here’s the original, in case you were born after 1972 or chose to delete the image from your mind.)

Deadpool’s costume, a favorite among comic book fans and convention cosplayers, includes a mask that covers the entire face, so we might not see the face of 2010’s sexiest man for much of the movie.

Reynolds played Deadpool in 2009’s “X-Men Origins: Wolverine,” but he never wore the famous red and black attire. Instead, he wore an unremarkable black suit bearing none of the hallmarks of the costume worn in the comics.

As the vanity shot indicates, Reynolds will be fully suited when returns to the role in first the feature-length “Deadpool,” scheduled for release in 2016.

In response to skepticism online who was beneath the mask, screenwriter Rhett Reese confirmed via Twitter that Reynolds was indeed in the suit.

Then as a special treat for April Fools’ Day, Reynolds was “interviewed” by “Extra” host Mario Lopez, about the debate over whether the movie should be rated PG-13 or R.

The ultraviolent Deadpool would seem to lend himself to an R rating, but Reynolds settled all that in memorable fashion, “killing” Lopez in the process.

Is 'Deadpool' Going to Be PG-13? Ryan Reynolds Weighs In 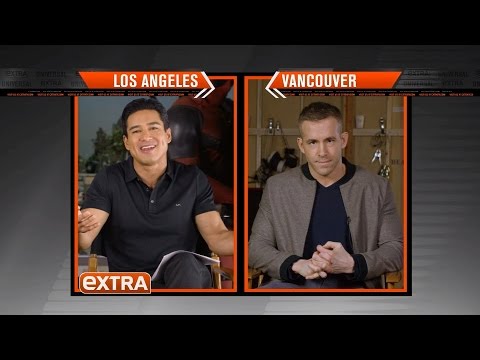