The actor was familiar debonair presence on UK, American screens for years

Patrick Macnee, the British actor who played bowler-hatted secret agent John Steed on the 1960s spy series “The Avengers,” died Thursday. He was 93.

The actor died Thursday at his home in Rancho Mirage, California, his son, Rupert, told his website, patrickmacnee.com.

Born to an upscale family in Berkshire, England – his father was a horse trainer – Macnee, a World War II naval veteran, spent years in the trenches of theater, film bit parts and TV guest roles before hitting it big as Steed when “The Avengers” premiered in 1961 on UK television.

Originally, Steed was the assistant to the lead, Dr. David Keel, a physician who solves crimes. But he soon became the lead and was paired with several beautiful and intelligent women: first Cathy Gale (Honor Blackman), later Tara King (Linda Thorson) but perhaps most notably, from 1965-68, Emma Peel (Diana Rigg).

Steed and Peel had a notable chemistry: Macnee in bespoke suit and characteristically British hat and umbrella, Rigg in fashionable outfits and the occasional catsuit. She was nobody’s fool, a speedy sports car driver and martial arts expert; he was suitably impressed, if more staid. The two routinely engaged in witty banter while keeping the world safe from supervillains. 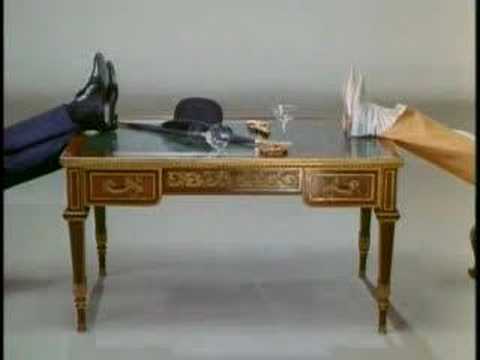 Steed accomplished his tasks while never carrying a gun, Macnee told the site The Quietus.

“I said that I wouldn’t carry one; when they asked me why, I said that I’d just come out of a world war in which I’d seen most of my friends blown to bits,” he said.

“The Avengers” went off the air in 1969. Macnee later reprised the role of Steed in “The New Avengers.”

After “The Avengers,” Macnee starred on Broadway in “Sleuth” and appeared in several movies, including the James Bond film “A View to a Kill” (1985). (Both Blackman and Rigg also starred in James Bond films.)

Perhaps his most notable post-“Avengers” role – if only for the contrast with the rest of the cast – was as record mogul Sir Denis Eton-Hogg in 1984’s “This Is Spinal Tap,” a dapper Brit toasting the disastrous heavy metal band at a party.

He also appeared in two music videos, the Pretenders’ “Don’t Get Me Wrong” (as Steed) and Oasis’ “Don’t Look Back in Anger.”

Macnee may have had an image of the quintessential buttoned-up Brit, but he had a fondness for the offbeat, he told The Quietus, noting that he’d also been in “The Creature Wasn’t Nice” and “Lobster Man from Mars.”

“I’ve always been a bit eccentric,” he said. “I love to do things nobody else does.”