Manager says he pulled Flores aside and said, "Son, you're the shortstop right now"

It’s a level of emotion rarely seen in regular-season sport.

In the bottom of the seventh inning, down 7-2 to the San Diego Padres, New York Mets shortstop Wilmer Flores approached the plate to an uncharacteristic level of applause, given the circumstances.

Citi Field had turned into a rumor mill, and fans had gotten word that the Venezuelan-born 23-year-old, who the Mets had signed on his 16th birthday, was being dealt along with pitcher Zack Wheeler to the Milwaukee Brewers for center fielder and onetime Met, Carlos Gomez.

“Nice big hand for Wilmer Flores as he comes to bat,” said play-by-play announcer Gary Cohen, calling the game for Sports New York. “Most of these fans know that Wilmer’s about to get traded. Social media being such these days, everyone knows what the situation is. It’s a little odd that Wilmer’s still in the game.”

Turns out, it wasn’t so odd, as Flores had not been traded at all. 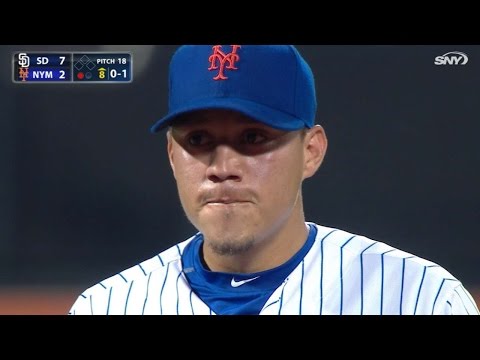 Still, he appeared forlorn in the dugout after grounding out. He took the field in the top of the eighth with moist cheeks and red puffy eyes, as his teammates tossed the ball around the diamond. He wiped his nose and upper lip on his glove, and at one point, took off his cap and wiped both eyes on his sleeves.

“You’ve got a player who’s been in your organization for seven years, who you valued, who you are trading clearly to bring back an important asset, and the fact that he’s out there risking injury at a time when you’re trying to consummate the trade is strange in itself. But for him to be that emotional and out on the field just strikes me as odd,” Cohen said.

It’s not clear exactly how the rumor began, but it was widely reported by several new outlets, including The New York Times, which said it had received word of the trade from a high-ranking team executive.

Calling it “one of the more surreal nights in the history of the Mets,” The Times speculated that it could have been a health problem that sunk the trade, as baseball trades aren’t official until all medical issues have been reviewed by the teams making the trade.

The paper further noted that there were conflicting reports that concerns about Wheeler, who underwent surgery this year and was not scheduled to pitch until next season, or about Gomez’s health resulted in the trade’s demise.

For his part, manager Terry Collins said he knew nothing of a trade and did not mince words expressing his frustration with the rumors – and fans and their cell phones and the media – in a postgame interview.

“To be politically correct, there’s a lot of BS out there – a lot of it,” he said. “The kid comes off the field tonight. He hears he’s traded. He’s upset by it, and I don’t know anything about it. So I went down and said, ‘Listen, I don’t know what’s going, but you’ve got a game to play. Let’s go play baseball. This is part of the business.’ “

He continued, “You guys think these guys are stone-cold robots. They’re not. They’re human beings who have emotions.”

Asked how the rumors began, Collins pleaded ignorance, but he did wonder aloud why fans attend games if they’re not going to watch what’s happening on the field.

“Everybody’s got a telephone. Everybody’s on it. I don’t even know why anybody comes anymore. They ought to just sit home, watch games on TV and on their cell phones,” he said. “They come to the ballpark. They’re on the radio. It’s on TV. I got guys in the dugout reporting this thing, and nobody’s told me a word. I walk in, and there’s no deal, OK?”

Collins said he was informed during the game that Flores was weeping. He asked why and was told that Flores had been traded.

“To who? For what? I didn’t know,” he said. “I feel terrible for Wilmer. As you guys know, there’s not a finer kid in that clubhouse.”

Perhaps channeling Jimmy Dugan during his famous no-crying pep talk in “A League of Their Own,” Collins said during the news conference that he pulled Flores aside and reminded him he still had business on the field.

“You’ve got to go out and play. I’m sorry he’s upset. Until somebody reports something, walks in our dugout or calls me on the phone and says, ‘Here’s what’s going on,’ son, you’re the shortstop right now. Maybe this’ll help him down the road because sometimes trades happen.”

And one of them involved Gomez, who was dealt Thursday to another team – the Houston Astros.