The one-minute video, “Todos Somos Americanos” or “We are all Americans,” also features a rare appearance from his wife of 41 years, Columba, who’s from Mexico.

“I have lived over half my life here,” she says in English in the video. “We all have the same interests, the same feelings.” 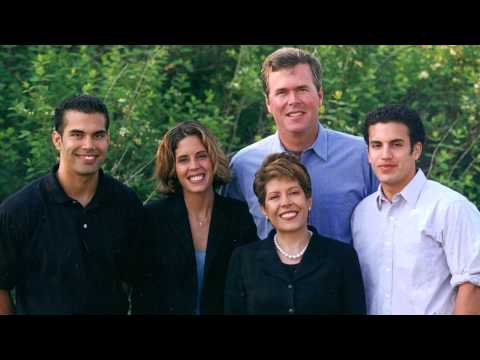 The Republican presidential candidate says in Spanish that he is “proud” that his children and grandchildren are Hispanic. “Hispanics contribute more every day to our culture; they are an integral part of the American dream,” Bush says.

The video comes a couple of weeks after Trump, who’s rocketed to fame in part because of his inflammatory rhetoric about illegal immigrants, said that Bush should “set an example by speaking English while in the United States.”

Bush regularly speaks in Spanish when he addresses Spanish-language media or Hispanic voters. In his stump speech, he says he wants to campaign with “brazos abiertos” or with “open arms.”

The former Florida governor has brushed off the criticism from the GOP front-runner, calling it last week the “dumbest thing I’ve ever heard.”

“I’m going to campaign in the Latino communities and yes, Mr. Trump if I’m asked a question in Spanish, I might answer in Spanish,” he said, before adding a dose of sarcasm. “I apologize.”

Bush and Trump will get a chance to go head to head with they stand next to each other on stage Wednesday at the CNN Republican presidential debate hosted at the Ronald Reagan Presidential Library.