Editor’s Note: This essay is part of a column called The Wisdom Project by David Allan, editorial director of CNN Health and Wellness. The series is on applying to one’s life the wisdom and philosophy found everywhere, from ancient texts to pop culture. You can follow David at @davidgallan. Don’t miss another Wisdom Project column by subscribing here.

The film is about the Buddhist concept of karma

The film is about the Christian concept of purgatory

I’ve seen the 1993 film “Groundhog Day” again and again and again, but only once on the big screen, a few years after it was in theaters. It was shown in a packed lecture hall inside Baltimore’s Walters Art Museum, followed by a lecture from a comparative religion scholar who took us through the spiritual meaning and symbolism cleverly packaged in what, on its surface, is a rom-com with a “Twilight Zone” premise.

Even if you haven’t seen the film you still know the basic plot because the term “Groundhog Day” has entered the common vernacular – which alone speaks to its resonance beyond the film itself – as shorthand for repeating the same experience over and over.

But it’s worth seeing, for the first time or the 10th, to witness the main character – self-centered weatherman Phil Connors (a role only Bill Murray could master) – breaking that cycle through personal redemption. It’s a grand metaphor some scholars see as Buddhist, Christian or secularly philosophical. It’s also directly, practically applicable to how you spend your day today, and everyday.

I think the film is best described as “Buddish,” an adjective coined by the film’s director, Harold Ramis, to sum up his own belief system. His mother-in-law and one of his best friends were devout Zen Buddhists who hooked him onto its precepts. “Memorable, simple, didn’t require articles of faith, but completely humanistic in every way that I valued,” he said in an interview for Chicago magazine in 2008. “So I proselytize it without practicing it.”

It's a wonderful lesson

And what an entertaining Buddish proselytization “Groundhog Day” is. Like sushi or a Jamba Juice shake, it’s so delicious you barely realize you’re eating raw fish and fruit. That’s the reason for this metaphysical movie’s enduring cult status: a genuinely hilarious film that glimpses the meaning of life.

There are many theories about Phil’s temporal loop (which by one estimate lasted nearly 34 years) and his eventual escape. One sees it as a metaphor for psychotherapy: repeating the stories of one’s past until you have a breakthrough that allows you to dismantle old patterns. Another claims it illustrates a classic economic paradigm.

But the most wisdom-invoking evidence amounts to religious insight and how to most fruitfully spend our precious hours.

‘Groundhog Day’ is all about karma

One of the central tenets of Buddhism is that we must continue to reincarnate until we find enlightenment. The concept, called samsara, keeps us living out many lives through “various modes of existence” (called gati), some lowly animals and others god-like, as determined by your actions (karma). Once ignorance and ego are destroyed by your actions and awareness, you awaken to the true, interconnected reality, which frees you from the cycle and into heavenly nirvana.

"What if there is no tomorrow? There wasn't one today."
alberto mier/cnn

In the film – written by Danny Rubin, a Zen Buddhist, according to Ramis’ DVD commentary of the film – Phil reincarnates each day, but he also transforms his behavior over “time.” He takes self-centered advantage of his unique predicament – robbing bank trucks, stuffing his face with angel food cake, tricking a woman into bed – but eventually perfects the day with creative self-improvement tasks and compassionately helping others. Once he becomes the best possible version of Phil Connors, he is released from his temporal prison, while simultaneously winning the love of his virtuous producer, Rita.

Phil’s plight is not unlike a character from Greek mythology who was doomed to eternally and perpetually push a boulder up a mountain. In his essay “The Myth of Sisyphus,” Albert Camus uses the story to illustrate the absurdity of lives that toil away at meaningless jobs. But Camus says we must find hope, and therefore meaning, in such a plight and he imagines Sisyphus understanding and accepting it.

Good and bad, it's all the same: a Taoist parable to live by

There’s a similar Buddhist tale of an enlightened monk who climbs a mountain to get a spoonful of snow in order to fill a well at the bottom of the mountain, again and again. Some lessons take a long and seemingly futile amount of time to learn. Buddhist monasticism is itself “Groundhog”-like with the same routine, clothes and daily rituals – for decades of practice.

Yet every moment is still different. Remember what the ancient Greek philosopher Heraclitus said: “No man ever steps in the same river twice, for it’s not the same river and he’s not the same man.” In that sense, Phil doesn’t repeat the same day over and over because one significant thing is different each Groundhog Day: him. He is the one thing that is changing.

What is time anyway? Illusory, says Buddhist dogma, a notion contained in the Zen koan Phil asks as he begins to understand that his own time is not progressing: “What if there is no tomorrow? There wasn’t one today.”

That’s right, woodchuck-chuckers, there is no past or future. There is only now.

‘Groundhog Day’ is all about purgatory

The Catholic concept of purgatory, a spiritual realm where souls must linger until they expiate their remaining sins and earn their way into heaven, fits the film’s bill as much as the Buddhist concept samsara. And many references and motifs that recur in the film support the notion that “Groundhog Day” is Christian rather than Buddhist. “These sticky buns are heaven.” “When you stand in the snow you look like an angel.” The groundhog hibernation – rebirth after a death of sorts, and emerging from the sleepy tomb – is reminiscent of Jesus.

There’s even a delightfully blasphemous scene in which Phil declares that he is a god. “I’m not the God … I don’t think,” he wonders aloud as he contemplates how close he comes to the Catholic conception of monotheism. “Maybe he’s not omnipotent. He’s just been around so long he knows everything.” This after he has shouted, like an angry deity, “I make the weather!”

Groundhog Day - all scenes with the old homeless man 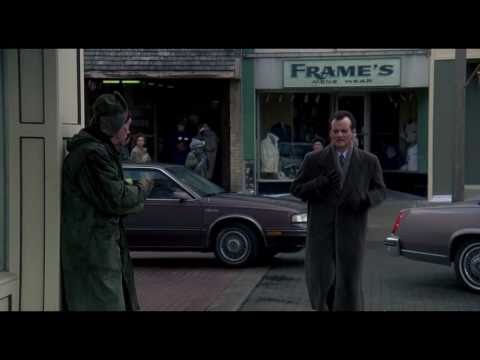 Then there’s the film’s montage with a homeless man whom Phil brushes off early on, patting his pants pockets like he doesn’t have any cash. Later Phil tries to help repeatedly, only to find the man dies every time. It’s the lesson of the Serenity Prayer, written by the theologian Reinhold Niebuhr and later co-opted by Alcoholics Anonymous:

God, grant me the serenity to accept the things I cannot change,

The courage to change the things I can,

And the wisdom to know the difference.

After accepting that he cannot save the old man, Phil turns an optimistic and meaningful corner in the plot and begins living in service to others (catching a falling boy from a tree, saving the mayor from choking etc). It’s this change of direction that allows him to escape purgatory.

‘Groundhog Day’ is about hope

Whatever spiritual takeaway the film holds for you, it’s an undeniable call for hope. Phil survives his many attempts at suicide – leaping from a church, dropping a toaster in the tub, driving off a cliff – and is reborn a hopeful, charitable man. Baptized by death and stronger for it on the other side, he tells his television audience: “When Chekhov saw the long winter, he saw a winter bleak and dark and bereft of hope. Yet we know that winter is just another step in the cycle of life.”

Winter is such a great metaphor for the bleakness that precedes rebirth. “I’ll give you a winter prediction,” the weatherman reports in the “hopeless” second act of the film. “It’s gonna be cold, it’s gonna be gray, and it’s gonna last you for the rest of your life.”

But in a more optimistic stage he wakes up one happy morning and surprises a stranger with a hug and a Samuel Coleridge quote: “Winter, slumbering in the open air, wears on its smiling face a dream…of spring.” It’s from the sonnet “Work Without Hope” which contains the famous line “bloom for whom ye may,” which Phil does.

This is the classic hero’s journey. Phil is exiled into an unexpected adventure, despairs, suffers losses, but eventually learns how to overcome his obstacles and hopelessness. By the end of the film, he has managed to become the town hero for all the mitzvah he crams into a single day.

‘Groundhog Day’ is all about you, today

You don’t have to subscribe to Buddhism or Christianity or believe in reincarnation or heaven for this story to be directly applicable to your daily life.

“What would you do if you were stuck in one place and every day was exactly the same, and nothing that you did mattered?” Phil asks a townie, Ralph, in the film.

“That about sums it up for me,” says Ralph.

And who doesn’t relate, at one time or another, for one day, or many years, to that sentiment. It’s Thoreau’s “life of quiet desperation.” It’s Sisyphus. It’s George Bailey pre-epiphany in “It’s a Wonderful Life.”

Drawing upon your own life experiments

“I think people place too much emphasis on their careers,” Phil says to Rita. “I wish we could all live in the mountains, at high altitude. That’s where I see myself in five years. How about you?” This sentiment echoes an earlier role in Murray’s career as Larry Darrell in the movie, based on the novel by W. Somerset Maugham, “The Razor’s Edge.” Darrell takes a pilgrimage to find enlightenment with Tibetan monks high in the Himalayas where he observes that, “It’s easy to be a holy man on top of a mountain.”

The rest of us are down here in the valley, where it’s harder. Each day is not that different than the last. We’re on autopilot sometimes. We’re bored. We repeat our bad habits. We are often self-centered and usually under-inspired.

But something does change every day, even if it’s imperceptible. It’s ourselves. And we can choose how this day will unfold, and how we will slowly evolve. There might even be a “Groundhog Day”-inspired resolution: memorizing French poetry, playing the piano, figuring out how to help others more often. Like Phil, we can utilize creativity and compassion to change a glass-is-half-empty paradigm, to half full. The pursuit of meaning is itself meaningful. And today, as well as everyday, can be your first day of spring.