Ronda Rousey: I thought about killing myself

Dethroned UFC champ Ronda Rousey says she was so devastated after losing her title to Holly Holm last November that she briefly considered suicide.

“Honestly … I was sitting in the corner [of the post-fight medical room] and was like, ‘What am I anymore if I’m not this?’ ” the mixed-martial arts fighter told Ellen DeGeneres on Tuesday during an emotional interview. “I was literally sitting there thinking about killing myself.”

For the previously undefeated and seemingly invincible Rousey – whose own father committed suicide when she was 8 – it was an existential crisis.

“In that exact second, I’m like, ‘I’m nothing. What do I do anymore?” she said, wiping away tears. “No one gives a s–t about me anymore without this.’”

What saved her, she said, was her devotion to her boyfriend, UFC fighter Travis Browne, who was standing at her side. “I looked up at him and I was just like, ‘I need to have his babies. I need to stay alive.’ “ 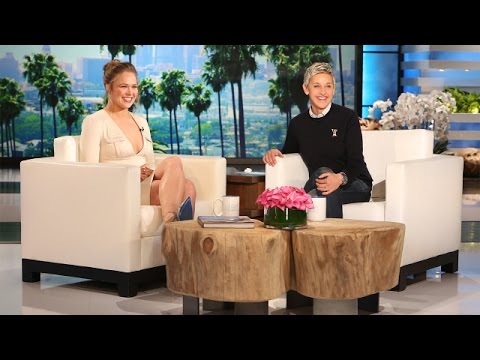 The “Ellen” interview was a rare display of vulnerability for Rousey, one of the toughest athletes on the planet, and perhaps the most revealing moment in what for her has been a sudden return to public life after almost two months of post-fight hibernation.

In recent weeks Rousey has hosted “Saturday Night Live,” co-starred with Amy Schumer and Seth Rogen in a Bud Light ad that aired during the Super Bowl and appeared in body paint on one of three covers for Sports Illustrated’s swimsuit issue.

Being naked during the body-painting process was an adjustment for her, Rousey says.

“The only time I think I was really self-conscious was, like, you know, they gotta paint all of you,” she told DeGeneres. “And there was one point where they’re like, ‘OK, bend over.’ ”

“There’s no not-awkward way to do this. … It was really weird,” she continued. “But (the artist and I) were really like best friends by the time we got out of there.”

Rousey also showed up Tuesday night on Jimmy Fallon’s show, where she talked about going to a Marine Corps ball in December – just four weeks after the humbling Holm fight – with Jarrod Haschert, a young Marine who had asked her out on Facebook.

“He was a real sweetheart,” she told Fallon. “That was, like, the first time I had smiled at all since (losing to Holm). … It was good to get off the couch and not just be, like, crying and eating ice cream all day.”

After the ball they went to Hooters, Rousey said, where she got into an argument about UFC fighters with a waitress who didn’t recognize her.

Ronda Rousey Hit Up Hooters After the Marine Corps Ball 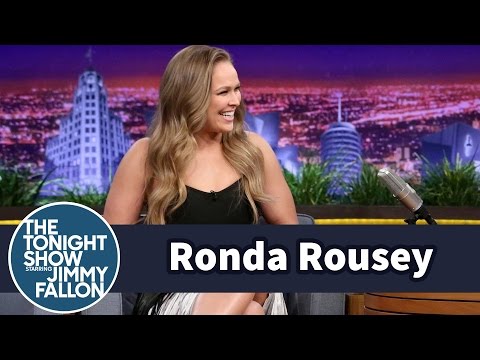 Next up for Rousey: Starring in a remake of “Roadhouse,” the 1989 Patrick Swayze movie about a bouncer at a roughneck bar. And of course, there’s the inevitable rematch with Holm, which probably won’t happen until fall 2016 at the earliest.

“Of course I want to fight Holly,” Rousey told DeGeneres. “I want to beat her and make everything right again.”

Holly Holm: The preacher’s daughter with a ferocious kick

DeGeneres praised Rousey for opening up about her post-fight anguish.

“Just because you’re strong doesn’t mean you (don’t) have a soft side and a vulnerable side. And I think it’s important to have both,” she told the fighter. “If you’re just strong, you’re not a human being.”

But don’t think that losing one fight has tempered Rousey’s legendary brashness. This week ESPN reported the UFC star filed for five trademarks around the acronym “FTA,” which stands for “F–k Them All.”

Ronda Rousey has filed for five trademarks to FTA. Stands for "F@#! Them All."

The trademarks would allow Rousey to launch FTA-related apparel and other merchandise, embracing a new role as a defiant former champion returning to the Octagon to silence her doubters.

“Maybe just winning all the time isn’t what’s best for everybody. Everyone has their moment of picking themselves off the floor,” Rousey told DeGeneres.

But then she added this: “I really do believe that I’m still undefeated. Because being defeated is a choice. Everyone has losses in their life, but I choose to always be undefeated.”