Indonesia had the best view of the total solar eclipse

The next total eclipse is on August 21, 2017 but will only be visible from parts of the U.S.

Crowds across Asia were treated to stunning views of a total solar eclipse on Wednesday morning.

Those in Indonesia had the best vantage point. The moon blacked out the sun in totality over Indonesia’s main western island of Sumatra, before moving eastwards across Sulawesi and Borneo, and then over to the Maluku Islands.

What is a solar eclipse?

The phenomenon, which occurs when the moon moves directly between the Earth and sun, was first visible in Western Indonesia at 6:20 a.m. Wednesday, March 9 local time (5:20 p.m. ET Tuesday, March 8).

By dawn, a few thousand residents of Jakarta had flocked to the city’s planetarium on Wednesday to view the total solar eclipse.

Long lines snaked through the compound, as volunteers distributed special viewing glasses. Families, many with small children, and groups of friends lined up as early as 2 a.m.

8 minutes out from totality! A prominence is visible at the top of the disk! #SolarEclipse https://t.co/PuDu67LbcW pic.twitter.com/wMQlJwmjaq

Sixty-five year old Sunaryo brought his grandchildren to see their first eclipse. He was overseas and missed the last total solar eclipse when it occurred in Indonesia in 1983.

“We heard from the news that they were distributing glasses. We got them because we arrived at 3 a.m.,” he said.

Skywatch: Your guide to space

“I want my children to witness it. It only happens every what, 30 years? I want them to learn about the science behind it but also to see the beauty of God’s creation,” he said.

The diamond ring is back! "Everything is lightening up even with that tiny bit of sun" https://t.co/PuDu67LbcW pic.twitter.com/bp2BvmFTtA

He witnessed the 1983 total solar eclipse with his family in Jakarta but heard stories about many people, especially on the island of Java, who didn’t because the government said it was too dangerous and could cause blindness.

“There were so many myths around it then but now it’s different. I want my children to see this. I may not be around for the next one,” Mulyarakman said. 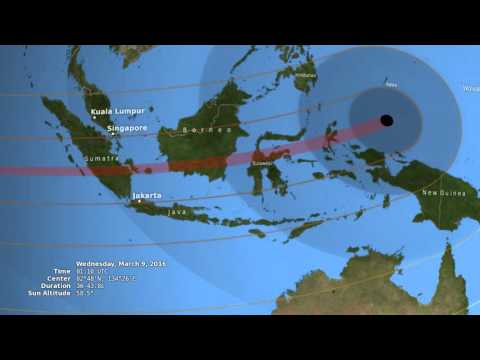 He and his family were a few of the lucky ones. The glasses soon ran out and many decided to watch live streaming of the eclipse from monitors in and around the planetarium building.

Others, like Marsha Siagian, traveled across the Indonesian archipelago to find the best possible viewing spot.

A Jakarta resident, she went to the island of Ternate Maluku in the country’s east to witness the occasion.

“The temperature drop was marked. It went from baking hot to cool. First the sky changed color, then it felt like the temperature dropped by 10 to 15 degrees Celsius, and finally the sun disappeared and in place there was this ring of light.”

The next total solar eclipse is on August 21, 2017 and will be visible from a narrow corridor across the United States.