The ‘Underground Astronauts’ in search of new human species

Hidden deep within the innards of a South African cave lay human evolution’s equivalent of Tutankhamun’s tomb. A treasure trove of 15 skeletons – eight children, five adults and two adolescents – all members of a previously unknown species of human ancestor.

In the field of paleontology, uncovering just one complete skeleton has been likened to winning the lottery, but lying here were over 1,500 fossils amounting to multiple jackpots.

This was the largest collection of hominin remains – part of the human lineage – ever discovered on the continent.

In 2013, American paleoanthropologist Lee Berger was tantalizingly close to finding them.

But there was a catch.

This reconstruction of Homo naledi by paelo-artist John Anthony Gurche took 700 hours to complete and is made of silicone with acrylic eyes. Each gland and muscle is carefully crafted.

Courtesy John Anthony Gurche
The fossils of Homo naledi were found in Rising Star Cave, South Africa, in 2013. The treasure trove of bones belonged to at least 15 individuals -- eight children, five adults, and two adolescents.
Courtesy Brett Eloff
Over 1,500 fossils were uncovered in total. It is believed Homo naledi stood approximately 1.5 meters (about 5 feet) tall and weighed about 45 kilograms (almost 100 pounds).
Courtesy John Hawks/University of Wiscons
The species appears to be an intriguing mixture of advanced and primitive features. While the skull shape was humanesque, the brain was tiny and the size of an orange.
Courtesy John Hawks
Homo naledi's teeth were small, and described as in-keeping with the genus Homo.
Courtesy John Hawks/Wits University
The ancient human also had curved ape-like fingers, which could have been used for climbing.
Courtesy Peter Schmid
It's feet are "virtually indistinguishable from those of modern humans," said Dr William Harcourt-Smith of Lehman College, City University of New York. This, combined with long slender legs, mean the species may have been capable of walking vast distances.
Courtesy John Hawks
Pictured, a team of scientists assess the bounty of bones back in the lab.
Courtesy John Hawks

New species of human was uncovered inside an unreachable cave

Separating Berger from this bounty of bones was a narrow passageway in the rock just 7 inches (18 centimeters) high, known as “Superman’s Crawl.” It was the only entrance and exit available to the fossils and would require superhuman powers to squeeze through it, particularly for a man of Berger’s stature.

The gap was roughly the width of a letterbox and was not really an option for Berger. But he found a way to get round it.

Berger posted a job description on Facebook calling out for skinny cavers to join his team at the University of Witwatersrand in South Africa. In reality, being skinny was not enough, as the soon-to-be employees would need to hold their breath in order to wriggle through the constricted passage.

To Berger’s amazement, over 60 qualified applicants got in touch. In the end, he chose an all-female team of six. He called them his “Underground Astronauts”.

Together, they were about to bring home a baffling new addition to the human family tree.

Read: A blood test before birth could predict your medical destiny

Berger had already firmly established himself in the field after discovering, in 2008, the fossils of yet another new species: Australopithecus sediba.

Berger’s nine-year-old son Matthew famously stumbled upon part of the skeleton – “Dad I found a fossil!” – while accompanying his father on a dig at the Malapa Nature Reserve, north of Johannesburg.

“I thought I’d won the lottery with Australepithecus sediba, that was gonna be my thing,” he says with a chuckle.

But it was his discovery of naledi that really set Berger’s name in the paleoanthropology stone, as it were.

Finding Sediba, some five years earlier, had cemented Berger’s conviction that this area of South Africa had more treasures hidden beneath the surface. It had already been dubbed the “Cradle of Humankind” for its abundance of fossils discovered in the 20th century.

He soon enlisted the help of his experienced cavers. As they delved deeper, he one night got a knock at the door that confirmed his hunch.

Standing in his doorway was Steve Tucker, an explorer by night, accountant by day, who along with fellow caver Rick Hunter had managed to pass superman’s crawl to make a startling discovery at Rising Star.

Berger looked at their photos from the cave and describes how from there on, naledi was a vortex that sucked him in.

“You’re seeing these images and realizing it was something that shouldn’t be – these fossils lying loose on the floor of this underground cave, and I could immediately see they were primitive.

Piecing together the puzzle

The species that soon surfaced was named Homo naledi, after the Rising Star cave where it was found in late 2013 – “naledi” meaning “star” in the local Sotho language.

True to its name, naledi was an out-of-this-world find – an intriguing mix of human and primitive features.

We were watching this crazy creature emerging, a mosaic of parts conflicting with each other

The unique ancestral species had human-like feet and long, slender legs primed to walk vast distances, yet also curved fingers and shoulders resembling that of an ape, which it may have used to climb and hang from trees.

Naledi’s head was also a puzzling combination of advanced and primitive features. While the shape of the skull was remarkably humanesque, the brain was tiny – less than half the size of that of a modern human.

Read: How to create opioids for the masses

Surprise, and indeed anxiety, rippled through the team in charge of piecing together these skeletons in the lab. “How could it have these human feet and curved fingers?” Berger recalls thinking.

“We were watching this crazy creature emerging, a mosaic of parts conflicting with each other,” he adds.

Berger knew he had to act fast before other cavers also stumbled across the find. He immediately called National Geographic, where he was an explorer-in-residence, to round up the Sediba team he’d worked with five years earlier.

What are we seeing?

Just what were they looking at here? Berger wasn’t sure – but he did know it was “utterly new to science.”

One other crucial fact missing was naledi’s age. Without this, it is difficult to pinpoint where exactly the species fit into the evolutionary scheme of things, but more than two years on from the original discovery, Berger believes they are now on the brink of pinning down a date.

“Naledi would fit, if our present understanding of human origins is correct, at the base of the homo lineage,” says Berger.

“But where it comes from, where it descends from, and what it gives rise to – if anything – we don’t know.”

As the team delved deeper, theories on how the skeletons ended up inside the Rising Star cave in the first place would question what it means to be human.

Entrance to Rising Star cave, where Lee Berger's team of 'underground astronauts' discovered the largest collection of hominin remains ever discovered on the African continent, in 2013.
Courtesy Brett Eloff/Wits University
The Underground Astronauts : Becca Peixotto, Alia Gurtov, Elen Feuerriegel, Marina Elliott, Lindsay Hunter, and Hannah Morris. The six cavers helped uncover 1,500 fossils from Rising Star cave in South Africa.
Courtesy John Hawks/University of Wiscons
"These people are heroic in their efforts, they're risking their lives to go in there," said expedition leader Lee Berger (pictured with caver Lindsay Eaves). "These explorers are squeezing their bodies through cracks and crevices where you have to cease breathing to push yourself through."

Courtesy Wits University
"It's damp, it's dark. If you slip in certain situations you can fall and injure yourself," explained Berger of Rising Star cave. Here, Lindsay Eaves manages to work on a laptop inside the cramped cave.
Courtesy Ellen Feuerriegel/Wits University
"I love communicating science," said American paleoanthropologist Lee Berger, pictured. "And I love the science that I've been privileged to do -- the search for human origins.
Courtesy Brett Eloff
While the Underground Astronauts searched the caves, Berger and his team monitored their every movement from a tent on the surface.
Courtesy Brett Eloff
Cavers Steve Tucker and Rick Hunter originally discovered the fossils in Rising Star cave, taking photos which they later showed to Berger.

What makes us human?

One of the most intriguing aspects of the discovery is how this treasure trove of fossils had arrived at Rising Star in the first place.

The individuals were found in different layers of rock, leading Berger’s team to believe they had entered the cave over an extended period of time, rather than dying in a single catastrophic event.

The bones also showed no sign of damage from predators.

Berger and his team now believe the most likely explanation is that naledi was using the cave to deposit its dead – an action culturally very close to humans.

Indeed, disposing of the dead could denote feelings of empathy and respect, an understanding of their own mortality, and a distinction between themselves and other creatures.

But if naledi was not human, as many of its characteristics suggest, then Berger’s theory is all the more provocative.

It does challenge the notion of what is a human

“It does challenge the notion of ‘what is a human?’ Or ‘how do we define humanity?’, is maybe a better word for it,” he says.

“What it means is that we shouldn’t perhaps consider ourselves as unique from the natural world – we’re not. I think naledi puts the nail in the coffin of that idea.”

“It seems pretty extraordinary that this material could have been intentionally deposited, over a period of time, by a group of small-brained hominins going through this regular, repeated behavior of disposing their dead in this deep, dangerous chamber,” he says. 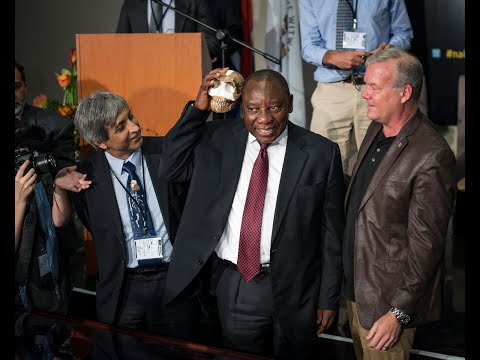 In the paleoanthropology world, it wasn’t just Berger’s find that raised eyebrows – but his controversial method of using mainly early-career scientists and the rapidity of his research.

Whereas other paleoanthropologists have been known to favor only a small number of established scientists, and take 15 years before publishing their findings, Berger’s team was holding press conferences within two years.

But Berger knew he wanted to approach things differently than his predecessors.

Read: The planet hunter searching for another Earth

“We asked ourselves: ‘Who has the best and most up-to-date databases? Who has their finger on the pulse of the best new technologies? Well, it’s clearly the early-career scientists. They’ve either just finished or are finishing their PhDs, or they’re in the midst of their most productive period of the research careers,” he explains.

As his research continued, Berger was keen to involve the public. He uploaded scans of the fossils to an open database where they were readily available to anyone wanting to print their own 3D models – or provide their own theories.

“We’re perhaps in the greatest age of discovery and exploration in all of history,” he says.

“For the first time we truly can combine new technologies in our search for things and knowledge, along with tapping the mental powers of a globe full of people.”

As Berger sees it, looking to the future may be the very thing that helps us unlock the past.