By Jill Dougherty, CNN
Published 11:18 AM EDT, Mon July 11, 2016
Link Copied!
New graduates of Russia's FSB academy appear to love the "geliki," the nickname of the Mercedes-Benz G-Klasse SUV, a common carrier of Moscow's rich and famous.
From YouTube
CNN  —

If you drive the mean streets of Moscow you no doubt know enough to watch out for the hulking, boxy, menacing Mercedes-Benz G-Klasse SUVs, the luxury cross-country “Geländewagen” that Russians have nicknamed “geliki.”

They’re usually driven by bodyguards employed by the capital’s rich, famous and politically connected. They’re also the favorite vehicle of the mafia. (Check out YouTube to see video of them ramming other cars and creating mayhem as they speed around the city.)

But, it turns out, there are other geliki aficionados, and a new video of their boisterous joy ride around Moscow has exploded on the Russian Internet.

It started June 21, when new graduates of the FSB academy (the FSB is the successor agency to the KGB) climbed into 28 gleaming black Mercedes G-Klasse geliki and hit the road, two and three vehicles abreast, horns blaring. They videotape their gleeful ride and posted it on the Internet, showing the young male graduates laughing and cheering like frat boys, giving thumbs up through open windows and the roof hatch. 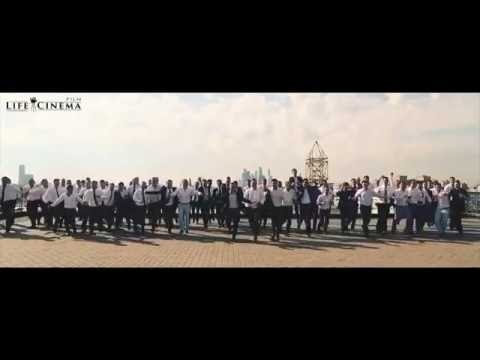 In a group photo also posted online, the grads cheer and wave, running toward the camera, their faces clearly visible.

The video went viral, with viewers slicing and dicing it, making fun of it, setting it to music from Russian rap songs and even “Star Wars.”

But not everyone was cheering. “Clowns! Showoffs!” said one viewer. “I feel sorry for our motherland!” said another. “These are the future protectors of criminals and thieves,” still another claimed.

One viewer posted a photo of a line of tiny, rusty Soviet-era Moskvich cars, claiming, tongue in cheek, that a teacher’s college had organized a “cheeky car race” through the streets of Moscow.

Some asked where the young men got enough money to pay for vehicles that cost well over $100,000 apiece. One source told a Russian TV station the grads rented the SUVs.

Retired FSB Maj. Gen. Alexander Mikhailov was furious, telling one Russian TV station: “This is the first time I’ve encountered such vanity by graduates.” They were trying to “be cool,” he said, and show their superiority to everyone else. “It’s treason!”

Mikhailov called them idiots and said he hoped the FSB would refuse to hire them. “If they’re running around like this now, what will they be like when they become majors?”

President Vladimir Putin, who served as a KGB agent and headed the agency under President Boris Yeltsin, isn’t commenting. His press secretary, Dmitry Peskov, said it should be up to the traffic police, or the directors of the academy, not to the Kremlin.