Ehrenreich has been announced as the new Han Solo

He has quite the resume already

Hopefully Alden Ehrenreich won’t have to lasso anyone in his new role as Han Solo.

It was announced over the weekend at “Star Wars” Celebration Europe that the actor has been cast in Disney’s forthcoming “Star Wars” film about the early life of Solo.

Fans may recognize the Los Angeles native for his role as the incredibly naive singing cowboy star Hobie Doyle in the Coen brothers 2016 film “Hail, Caesar!”

Ehrenreich told The Guardian he put in serious work for the role.

“As soon as I got the part I was doing horseback riding, trick roping, gun twirling, guitar,” he said. “And the spaghetti lasso, which was the hardest.”

Here’s what else you should know about the 26-year-old actor.

Thank you Steven Spielberg and a bat mitzvah video

Ehrenreich may have one of the best “discovery” stories ever in Hollywood.

He told Rolling Stone that he was 14 when famed director Steven Speilberg spotted him in a video a Jewish friend asked him to do which was shown at her bat mitzvah.

“I mean, there wasn’t a script: We would go and just film whatever made us laugh,” the future star said. “I’m this 14-year-old, skinny little kid with long hair. I break into her house, try on her clothes and make up a song. All of this is just us literally taking a camera and going like, ‘Okay, ha ha, do this.’”

Her parents loved it, as did Spielberg, and soon Ehrenreich was appearing in guest spots on TV shows like “CSI.”

He’s a fan of old movies

Ehrenreich said he enjoyed being on the “Hail, Caesar!” The film is set in 1950s Hollywood and the lack of special effects didn’t bother the actor a bit.

“I grew up watching all these old movies, so to get to just be on sets that look like that and participate in it…with having that kind of Joel and Ethan [Coen] way of winking at it…it was great,” Ehrenreich said in an interview with Flicks and the City 2. 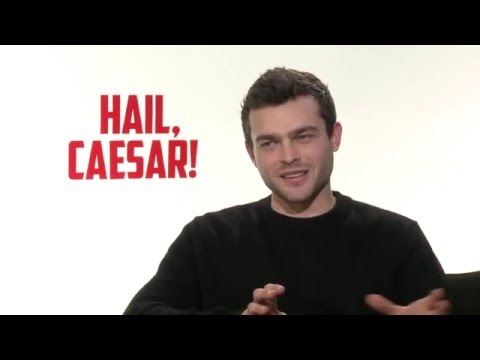 “The next Leonardo DiCaprio”

At a young age Ehrenreich has already worked with a few Hollywood Legends.

He made his film debut in 2009 in Francis Ford Coppola’s independent film “Tetro,” worked with him again in 2011’s “Twixt” and in 2013 starred as Cate Blanchett’s stepson in the Woody Allen-directed drama “Blue Jasmine.”

Add to that his heart throb status for his role as Ethan Wate in the 2013 film adaptation of the young adult novel “Beautiful Creatures” and Ehrenreich has drawn come comparisons to Leonardo DiCaprio.

And like DiCaprio, he is all about his craft.

“For me, the drive is storytelling,” Ehrenreich told Interview. “To be a part of an art that tells a story and to be a catalyst, a color in that, is very exciting.”