Viviana Guzmán likes to play the flute while paddle boarding

Guzmán, who lives in California, but travels the world playing the flute, said she noticed the whales swimming close to the shore near her home in Half Moon Bay in early July. With a friend, a flute, and two GoPro cameras, Guzmán had just hit the water last week and, after she briefly played the flute, she began to adjust her camera. When she did, one of the massive mammals swam right between her and her friend. 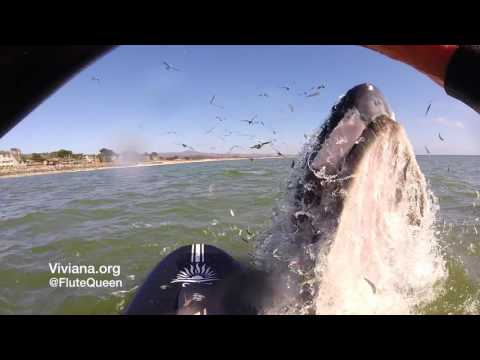 “In the 20 years I’ve lived on the coast they’ve never been this close,” Guzmán said of the whales, “I love going out on my paddle board and I have started taking my flute with me and they seem to like it.”

Speaking to CNN from Villarrica, Chile, on Tuesday, where she was due to perform, the artist said she and her paddle board partner were startled when the whale surfaced so close.

This wasn't the first time one of the whales approached the flutist
Viviana "FluteQueen" Guzman / Viviana.org / @FluteQueen

Later in the video, she is seen playing her flute on a different day, and the whale approaches her board. “She came to you,” Guzmán’s friend excitingly exclaims.