But the Chinese government has had enough, telling protestors through the the state-run People’s Daily newspaper Wednesday that they are being “irrational and disruptive.”

On July 12, the Permanent Court of Arbitration in the Hague ruled overwhelmingly in favor of the Philippines, saying there was no legal basis for China’s claim to a large part of the South China Sea. China strongly rejected the decision.

In the week after the ruling, videos and pictures of nationalists boycotting U.S. food chains – the ultimate U.S. symbol in their eyes – have been posted on social media in several Chinese cities.

Chinese news portal Sohu.com reported that residents from an estimated 11 Chinese cities launched a boycott movement against KFC on Monday.

In Changsha in Hunan province, residents held up a banner outside a KFC restaurant that reads: “Get out of China, KFC and McDonald’s.”

On Tuesday, police in central China’s Henan province detained three people outside a KFC outlet over organizing a disruptive boycott.

Meanwhile, a campaign of smashing iPhones has taken off on social media, in protest against U.S. tech giant Apple.

At one point the video, which was backed by the Chinese Communist Party Youth League, shows two young women in camouflage clothing repeat the lyrics while showing off daggers. 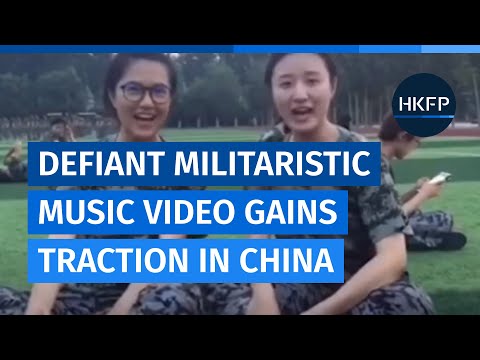 Anti-Philippines sentiment can even be felt on China’s largest online shopping web site Taobao, with sellers offering locally grown dried mango instead of fruit grown in the Philippines.

In recent days the government has begun to indicate protests should cease, similar to when when mass rallies across China following a similar territorial dispute with Japan in 2012 were strongly discouraged by the Chinese government.

State media has begun to criticize the protests as “irrational,” saying they could harm China’s reputation.

“Any action that promotes national development can rightfully be called patriotic. But so-called patriotism that willfully sacrifices public order will only bring damage to the nation and society,” a People’s Daily editorial said Wednesday.

“Pragmatic and effective patriotism only counts If we can all rationalize our actions, converting patriotic concept into action, contributing to the national development by fulfilling our own duties,” state news agency Xinhua commented.

Analysts say the ruling has sparked an outburst of nationalism among Chinese.

“It will further escalate nationalist sentiment in a big nation like China, which is might is right,” Wang Jiangyu, law professor with the National University of Singapore, said. “In fact, it has immediately forced many of China’s moderates to become hawks.”

But not all Chinese social media users are in favor of this type of behavior.

“I am Chinese; I think the boycotters are idiots and I am boycotting them,” Weibo user @Age_AVR commented.

Calls to Yum! China, the company that owns KFC, and Apple, went unanswered.