The first lady has repeatedly said she never will do so

First lady Michelle Obama’s speech at the Democratic convention in Philadelphia Monday night electrified the crowd and proved once more that she is among Democrats’ most effective surrogates. It also again stirred speculation – or more precisely dreams – by Democrats that she would one day put her own name on the ballot.

Michelle Obama at DNC: ‘When they go low, we go high’

Here is a timeline of her denials and those made on her behalf, which began as early as 2012:

While speaking at a “Take Your Daughters and Sons to Work Day” event at the White House, Obama was asked by a child whether she plans to run for president.

“Absolutely not,” she said. “Being president is a really hard job and it’s an important job. And when my husband is running for president, we’re right in there; we’re serving, too. And I think that once his terms are over, we’ll go on to do other important things because there are so many ways that you can help this country and the world, even if you’re not president of the United States.”

But then Obama added, “One of the things you learn about yourself as you get older are what are your strengths and what are your interests, and for me, it’s other stuff, that is not being the president, so I probably won’t run.”

The first lady was asked during an interview on “The View” whether she had considered running for office. Michelle Obama said that she hadn’t, adding that it’s one of the “hardest jobs.”

“There are so many ways to serve and being president is one of the hardest ways and that’s one of the reasons why I tell Barack, I’m a little smarter than him. I picked the easier job,” Obama said.

President Barack Obama joked that the first lady should run for office during the couple’s joint interview on “The View.” 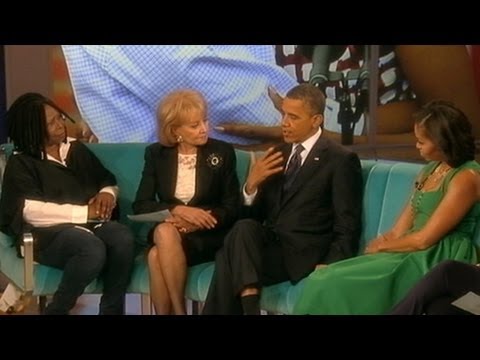 Obama said that she would be “terrific,” but added, “temperamentally, I don’t know …” amid laughter from the crowd.

“No, it’s absolutely true,” Michelle Obama said. “It takes a lot of patience to be the president of the United States. I’m not that patient.”

Before rumors about a Michelle Obama Senate run heated up, President Obama flatly told Kelly Ripa and Michael Strahan that his wife will never run for office.

The President said that if his wife ever told him that she plans to run, he would say, “‘Where did you take my wife? Had there been an alien body-snatching going on?’ One thing I can promise you: Michelle will not run for office.”

“It definitely will not be. It will be mission-based, service-focused,” Obama said, according to Reuters.

Sources close to the White House shut down speculation and rumors, largely fueled by insubstantially-sourced reports, that Democrats were urging Obama to move to California to run for Sen. Dianne Feinstein’s seat if the senator retires in 2018.

“She is as likely to put her name in contention to be the next pope as she is to run for political office,” Kristina Schake, the first lady’s former communications director, said.

President Obama responded with a quick “no” when an attendee at a town hall in Baton Rouge, Louisiana, asked if Michelle Obama would consider running for president.

“I have a question for you. Since you can’t run again for another term, is there any way that we as a group can talk the first lady into running?” the attendee said.

“Let me tell you, there are three things that are certain in life,” Obama replied. “Death, taxes, and Michelle is not running for president. That I can tell you.”

Video Ad Feedback
Michelle Obama: I will not run for president
01:04 - Source: KXAN

While speaking at the South by Southwest festival in Austin, Texas, the first lady reaffirmed she would not be seeking the presidency.

“I will not run for president. No, nope, not going to do it,” Obama said, adding, that she would like to remain free from partisan controversy while she serves the American public.