Will Smith says he's talked to President Barack Obama about playing him in a movie.

Will Smith has political ambitions on screen and off. Though, one of those is more likely to happen than the other, he tells Stephen Colbert.

During a Tuesday night appearance on “The Late Show,” the “Suicide Squad” star told Colbert he’s talked with president Barack Obama “a couple of times” about possibly playing him in a movie.

“He said that one thing is for sure: I have the ears to play him,” Smith joked.

Will Smith Missed His Chance to be the First Black President 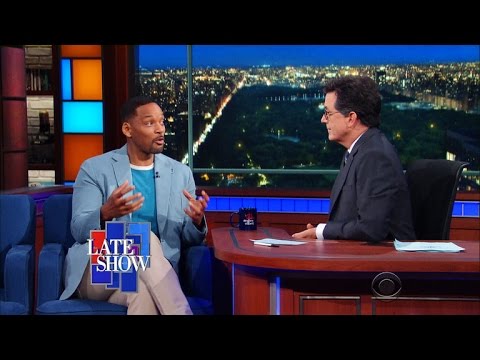 (Actor Parker Sawyers will play Obama in an upcoming film about his young romance with Michelle Obama called “Southside with You.”)

Smith admitted entering the political arena in real life has crossed his mind before, but says he doesn’t think politics is “where my greatest gifts are.”

“I definitely have had the itching,” he said. “I have lots of views and ideas and sometimes I hear people say things on television and I just want to run against them.”

His wife Jada Pinkett Smith, however, is not keen on the idea, he said.

“My wife has said on numerous occasions, ‘Hell, no,’” he said. “I don’t know what she means by that, but that was what she said.”

Smith also opened up to Colbert about his views on race relations in the country, comparing the issue to a marriage that needs work: “There’s a darkness before the dawn that is always difficult.”

“I think racism is not getting worse, it’s getting filmed,” he said. “I do view it as a difficult time, but I think the problem is on the table and I think there’s an opportunity – more than ever – for a level of understanding that we’ve never had before.”