Mars simulation crew ‘return to Earth’ after 365 days in isolation

The experiment was intended to study the effects of isolation

A crew of intrepid “astronauts” have emerged after a year on Mars… kind of.

Six scientists spent 365 days in a geodesic dome set in a Mars-like environment 8,200 feet (2,500 meters) above sea level. The simulated habitat was located on the slopes of Mauna Loa, a volcano in Hawaii.

The experiment, the longest of its type ever conducted, was designed to test crew cohesion and performance in isolation. It forms an important part of any real mission to Mars as journeys to the red planet will take upwards of six months, before any surface missions even begin, and astronauts will have to spend long periods of time together in a claustrophobic space. 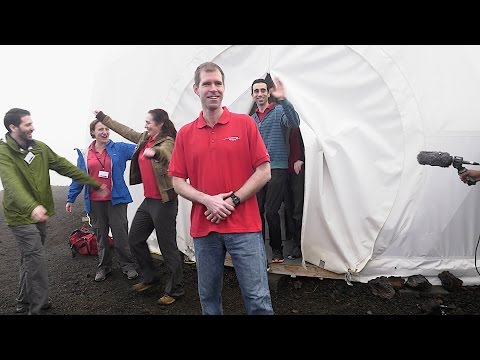 “The UH research going on up here is just super vital when it comes to picking crews, figuring out how people are going to actually work on different kinds of missions, and sort of the human factors element of space travel, colonization, whatever it is you are actually looking at,” Tristan Bassingthwaighte, who served as the crew’s architect, said in a statement.

Mars and Earth closest they’ve been for 11 years

Interest in Mars is at its highest in years, thanks in part to the success of the book and film “The Martian,” and to boosting from private entrepreneurs such as Elon Musk, whose SpaceX hopes to launch a manned-mission to the planet by 2024.

The University of Hawaii experiment, which is funded by NASA, is the third so far conducted. Previous missions lasted four and eight months, respectively.

A similar experiment has also been conducted by the European Space Agency, in Concordia, Antarctica, and in Moscow, where crew members warned of sleep and psychological issues.

“I think the technological and psychological obstacles can be overcome,” Cyprien Verseux said after emerging from the Hawaiian Mars.

When is a rock more than just a rock? When it's an iguana, of course. Conspiracy theorists have been trawling through photos taken by NASA's Curiosity rover and pointing out mysterious objects that they say are proof of life on Mars.
NASA
The Star Destroyer: UFO buffs claim this pic shows a Star Wars-like spaceship that crash landed on the red planet.
NASA
The Squirrel: Observers spotted a squirrel crouched between two rocks in this Curiosity photo. NASA says rodents would be "further up the food chain" than Martian life, if it existed, ever made it to.
NASA
The Strange Lady: This ghost-like "woman" seems to peering down at Curiosity from a cliff. NASA says it's probably just an oddly shaped drift of sand.
NASA
The Pyramid: Alien hunters say this pyramid is roughly the size of a small car, and believe it may be the tip of a much larger pyramid buried underground.
NASA
The Floating Rock: Eagle-eyed spectators spotted this sphere levitating above the surface of Mars.
NASA
The Crab: One blogger spied a "crab-like" object clinging to the cliff on the right side of this photo.
NASA
The Helmet: It's definitely a weirdly shaped rock. But is it a World War I helmet? That's what some have claimed.
NASA
The Skull: This "humanoid skull" was spotted on Mars last year. Paranormal Crucible says "it's clearly not a rock." Right.
NASA
The Dinosaur Spine: To the uninitiated, it looks like series of rocks protruding from the ground. But alien hunters say it's a fossilized dinosaur spine.
NASA
The Mermaid: Before there was Curiosity, there was the Spirit rover, which captured this image of a "mermaid" in 2008.
NASA

Fellow crewmember Christiane Heinicke added she was amazed she could draw water from the “little greenhouse construct” in their simulated environment. She said that the success of this experiment suggested that it might even be possible to use similar methods to get water on Mars, which is notorious for being completely dry.

The University of Hawaii is currently recruiting for crew members to take part in its next two missions, scheduled to begin in 2017 and 2018.