Editor’s Note: This story contains graphic images, including some of child victims.

Fresh airstrikes rained down Wednesday on a rebel-held neighborhood in Syria’s east Aleppo, killing two people at a market where an alleged chlorine gas attack injured more than 100 people a day earlier, an activist told CNN.

The two at the market were among at least seven people killed and 40 injured in the latest strikes on the Sukkari neighborhood, the activist with the Aleppo Media Center said. The center is a group of opposition-affiliated activists documenting the conflict in the city.

In Tuesday’s alleged chemical attack, more than 100 people – including dozens of children – were admitted to the hospital after barrels suspected of containing chlorine gas were dropped, medical group activists say.

Wednesday’s airstrikes struck the market, a mosque, a street and a roundabout in the rebel-occupied neighborhood, the activist said.

He described scenes of terror at the market as he arrived in the aftermath.

“People were very afraid,” he said. He told of a boy and a girl crying as they searched for their father, a sandwich seller, and emergency vehicles speeding in fear of further strikes from military jets overhead.

There were desperate scenes at a hospital where a team of two doctors and two nurses tended to people’s injuries.

“It was another massacre,” the activist said.

Chlorine gas allegedly was dropped about 1 p.m. local time Tuesday in barrel bombs from a helicopter, according to another Aleppo Media Center activist who attended the aftermath of the blast.
The drop was followed by four rockets fired by military jets, he said.

“When I arrived at the market, I started seeing the injured people and noticed that something was unusual,” he said.

“The injured did not have any signs of injuries or blood,” he said, but instead were coughing loudly and had red, teary eyes.

“From 300 meters from the center of the barrel bomb, I started smelling chlorine, and I realized it was a chlorine bomb,” he said.

One person was killed by the blast of the barrel bomb, according to the US-based Syrian American Medical Society, which supports one of three hospitals in Aleppo where the victims were taken.

In this still from a video, a girl is treated at a makeshift hospital after the suspected chemical attack.
Syrian Civil Defense

At least 37 children and 10 women were among those hospitalized, the Aleppo Free Doctors Committee said in a statement.

The victims were struggling to breathe, coughing harshly, and they had the smell of chlorine on their clothes, the statement said.

Most were discharged after several hours, but 10 people remained in intensive care, including a pregnant woman in her last trimester whose unborn child was showing a weak pulse, the committee said.

CNN cannot confirm the authenticity of these reports.

Another reported use of chlorine gas in besieged eastern #Aleppo City. Casualties include many children. pic.twitter.com/HTQ2jcL0kJ

Harrowing footage distributed by the Syrian Civil Defense – a volunteer group also known as the White Helmets – showed young children and others being rushed to the hospital in the arms of rescuers, gasping desperately for air while being given oxygen masks.

Footage purporting to be of the blast site moments afterward showed barrels lying on top of what’s left of destroyed buildings.

In the video, rescuers washed a boy with a hose after he was pulled from the rubble as sirens wail around him. 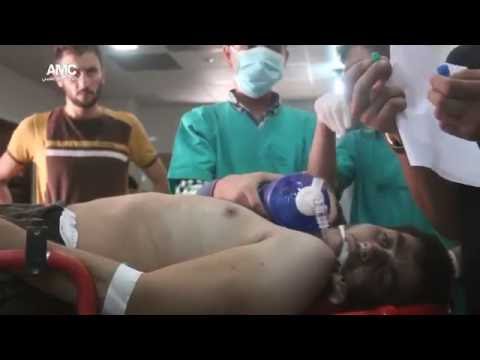 The Syrian government has denied using chlorine gas for military purposes in the past.

Hamish de Bretton-Gordon, a chemical weapons expert who is an adviser to nongovernmental organizations in Syria and Iraq, said chlorine gas could be deadly, and was a powerful psychological weapon.

What happens when chlorine is used as a chemical weapon?

The use of the widely available chemical in warfare was a war crime, he said.

“It’s not nearly as toxic as nerve agents like sarin. It’s a choking agent, and if you breathe enough of it, it creates hydrochloric acid,” he said.

“Children’s lungs are much more susceptible. That’s one of the reasons you see much more child casualties than adults.”

He said the Syrian conflict has seen a resurgence in chemical weapons, which had not been widely used since the Iran-Iraq War and Saddam Hussein’s campaign against the Kurds in the late 1980s.

He traced this prevalence back to the use of chemical weapons in a massive, deadly attack in the Damascus suburb of Ghouta in 2013, which opposition activists blamed on the Syrian regime. The Syrian government denied having carried out the attack.

The international community took no military action in response, although a multinational deal was struck under which the majority of Syria’s chemical arsenal was removed.

However, the deal did not remove stocks of chlorine, a dual-use chemical that has industrial applications but can also be used as a crude chemical weapon, delivered by improvised barrel bomb.

“The barrel bombs are basically liquid cylinders of chlorine that they throw out a helicopter,” de Bretton-Gordon said.

“You don’t even need a very big explosive – just enough to split the barrel.”

Since the Ghouta attack, he estimated that chemical weapons had been used more than 100 times in the conflict, and their effectiveness when deployed by the regime against ISIS had encouraged the terror group to use them in turn.

“Nothing happened after Ghouta. He used chemical weapons, he didn’t fall and he’s still there,” he said, referring to Syrian President Bashar al-Assad. “The fact the international community did nothing has encouraged him and encouraged Islamic State to do the same.”

The Assad regime has been repeatedly accused of using chlorine gas as a chemical weapon, and a UN investigation in August found that regime forces had twice carried out chlorine attacks.

US Secretary of State John Kerry said last year that he was “absolutely certain” the Syrian government had attacked its own people with chlorine – an accusation the regime has denied.

Syria and its ally Russia have accused Islamist militants of using chlorine in the past. UN investigators also said last month it had found that ISIS had used mustard gas in the battlefield.

CNN’s Clarissa Ward: ‘There are no winners in Aleppo’

“The systematic use of chemical weapons in Syria with impunity for perpetrators has become the ‘new normal,’” the Syrian American Medical Society said in a statement Tuesday.

Aleppo, prewar Syria’s largest city and commercial hub, has been divided for years into areas under rebel and regime control. The city has been heavily hit by intensifying violence in recent months following the failure of an American- and Russian-brokered “cessation of hostilities.”