Scientists hope bones still hold DNA, which could reveal where ship came from

The diver wiggled a hand over the debris, watching with anticipation as the sediment of the seafloor scattered. And as the water cleared, what was revealed was unmistakable – human remains.

Off the coast of the isolated Mediterranean island of Antikythera in Greece lies one of the largest and most puzzling shipwrecks in history. But now the sea may finally be ready to reveal its secrets.

A team of international archaeologists from the Hellenic Ministry of Culture and the Woods Hole Oceanographic Institution (WHOI) have recovered a partial skeleton – believed to be from a male in his early 20s – from its watery gravesite about 50 meters (165 feet) below the surface. And researchers hope it could shed light on what caused the ship to sink off of the jagged coastline more than 2,000 years ago.

“It was the first dive on the first day, within three minutes of hitting the bottom and a couple of hand swipes to move away the sediment, long bones appeared and then the skull. It was pretty exciting,” Brendan Foley, a marine archaeologist with WHOI and co-director of the expedition, tells CNN.

A treasure trove from antiquity

The excavations have yielded a partial skull, including a jaw and three teeth, two arm bones, multiple rib fragments and two femurs.

Foley says that the bones were located on August 31 during the team’s second expedition of the season. Archaeologists were already jubilant following a successful exploration in May, which saw the team return with spectacular treasures that included a bronze spear, gold jewelry and glassware.

“The theme here is that steady labor at the site over the last four years has now gotten us to the point where almost every dive is delivering something that is just jaw-dropping,” he says with excitement in his voice.

“We are getting these glimpses back to one of the most interesting periods in human history. This moment when the Roman Republic is switching over to the Roman Empire – really one of the first periods of globalization.”

Will DNA reveal secrets of the deep?

Foley affectionately refers to the remains as Pamphilos, a Greek name which translates to “friend to everyone.” The moniker comes from a drinking vessel with the same name etched across the rim previously recovered by famed underwater explorer Jacques Cousteau in 1976.

With painstaking care, the team disinterred the latest skeletal remains and brought them back to the surface, where Hannes Schroeder, an expert in ancient DNA from the Natural History Museum of Denmark, had been drafted to evaluate whether there is the potential for DNA extraction. 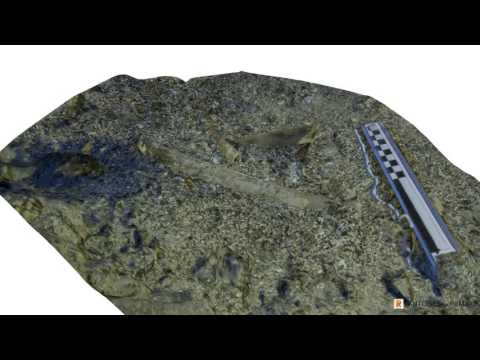 If viable DNA does exist, Schroeder believes this could point toward some of the answers archaeologists are searching for about the mysterious voyage.

“This is where the DNA can provide some information, because sexing based on the DNA is fairly straightforward,” Schroeder tells CNN.

“We could look at the individual’s genetic ancestry… and that will tell us something about his or her origins (and) this could be interesting because we know next to nothing about the crew, about the voyage, what kind of people were on the ship. It will give us a little bit of an insight into who were on board the ship that traded across the Mediterranean 2,000 years ago.”

Schroeder says preliminary analysis of the teeth, which appear to be in relatively pristine condition with little wear and a robust femur bone, indicates the remains could be from a young man in around 20 years old. He adds that while the femurs, for example, are unlikely to have viable DNA, hope lies in the petrous bone – a hard section of the skull located behind the ear. He says this is the most likely area to locate DNA, if it still exists.

“(The bones) looked surprising well-preserved for being 2,000 years old and at the bottom of the sea. It’s a very rare thing to find something like this.”

"That (area) has been shown repeatedly to preserve DNA area than any other skeletal element," says Hannes Schroeder, an expert in ancient DNA extraction.
Brett Seymour, EUA/WHOI/ARGO

The enduring mystery of Antikythera

Little is definitively known about the ship and its ill-fated passengers, but archaeologists believe it sank rapidly in catastrophic circumstances in the first century BC.

History made: In an astonishing Bronze Age discovery a 3000-year-old community has been unearthed

It remained undiscovered until sponge divers from the Greek island of Symi sought refuge from a brutal storm, anchoring along the eastern coastline of Antikythera. But it was the 1902 recovery of a clump of calcified stone with mysterious inscriptions that would push the wreck into archaeological lore.

Subsequent archaeological expeditions have returned with a plethora of incredible treasures – including the famed Antikythera mechanism – considered by many to be the world’s earliest known “computer.”

Cousteau led a 1976 expedition, when his team hauled even more artifacts – including bones believed to be from four individuals – to the surface. After this, operations at the site ceased for nearly 40 years until Foley and his team reinvigorated the search for answers in 2014.

‘The clock is ticking’

Now Schroder finds himself in an accidental race against time. Since the bones were removed from the seabed, any viable DNA that may exist will have started to degrade faster due to the change in environment. But a sample extraction must wait until permission is granted by Greek authorities.

“The clock is ticking. That DNA is certainly degrading so it’s a race,” says Foley, who is working with his Greek counterpart Theotokis Theodoulou to get the green light from officials for sample extraction.

‘There’s going to be more’

Meanwhile, Foley believes there are more remains waiting to be recovered from the azure waters off Antikythera.

“I bet you there is going to be more. The area where we were excavating, which we are fairly certain is the stern of the ship where the galley was, is probably where crew and passenger compartments were located. So if that’s truly the case we’re going to get personal possessions (and) we’ll probably get more human remains.”

Solving the mystery of the 2,100-year-old shipwreck

But further excavations will have to wait until next year’s archaeological season. In the meantime, archaeologists will work to analyze their latest finds and once samples have been taken, Foley hopes a full 3D reconstruction of the skull can begin.

“As soon as we went to lift the skull out of the sediment, it fell into all these pieces but we very carefully reassembled it … so I’m optimistic that the conservators will be able to place the pieces back together,” he says. “I would like to get a 3D model of the skull… then we could all look into the face of Pamphilos.”