"I believe he can serve as president," Ayotte says about Trump

"I've had some disagreements with him," she adds

New Hampshire GOP Sen. Kelly Ayotte said during a debate on Monday that she would “absolutely” point to Republican presidential nominee Donald Trump as a role model for a child. She issued a statement after the debate saying she “misspoke.”

The first-term senator was asked by a moderator during the NECN debate: “Would you tell them to be like Donald Trump? Would you point to him as a role model?”

“I think that certainly there are many role models that we have, and I believe he can serve as president and so, absolutely. I would do that,” she said at the New England College hosted debate in Henniker, New Hampshire.

In a statement afterward, Ayotte said: “I misspoke tonight. While I would hope all of our children would aspire to be president, neither Donald Trump nor Hillary Clinton have set a good example and I wouldn’t hold either of them as role models for my kids.”

Ayotte is currently locked in a hotly contested Senate reelection race against Democratic rival, Gov. Maggie Hassan. Ayotte has said she is voting for Trump, but not endorsed him for president.

Ayotte has said that she will she will “stand up” to Trump if he becomes president – but she will vote for him in November.

“I will take on my own party,” Ayotte told CNN in Nashua in August. “I really believe that this is a big issue in this race – that I am the one candidate that will stand up to whomever is in the White House to do good things when we can work together – also when it’s wrong to stand up to them.” 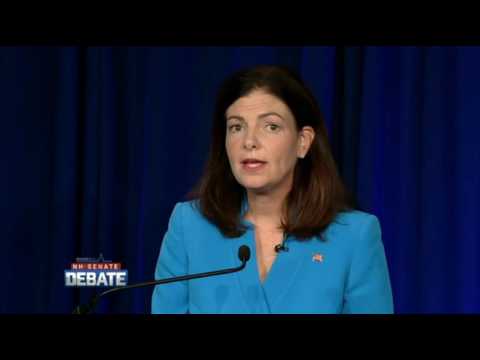 During Monday’s debate, someone off-screen asked Ayotte: “If you think he can serve as president, why won’t you endorse him?”

Since Trump launched his campaign last summer, he called some Mexicans “rapists” during his announcement speech, said Sen. John McCain isn’t a “war hero” because he was captured, proposed a temporary Muslim ban, mocked a disabled reporter during a campaign rally, repeatedly made harsh comments about women, and attacked the Khans, a Gold Star family, for their comments at the Democratic National Convention.

And at a rally in Pennsylvania this weekend, Trump hit Clinton on her “stamina,” said that Clinton is not “loyal” to her husband, former President Bill Clinton, and called her an “incompetent” and “sarcastic woman.”

In the past, Ayotte has been heavily critical on Trump’s controversies, including his attacks against the Khan family.

When Trump was asked about Ayotte in an August Washington Post interview, he criticized her lack of support and implied she was weak.

“You have a Kelly Ayotte, who doesn’t want to talk about Trump, but I’m beating her in the polls by a lot. You tell me. Are these people that should be representing us?” he said. “We need loyal people in this country. We need fighters in this country. We don’t need weak people. We have enough of them.”

CNN’s Cassie Spodak and Patrick Cornell contributed to this report.