Tune in to CNN Films’ “We Will Rise: Michelle Obama’s Mission to Educate Girls Around the World,” Wednesday, October 12 at 9pm EST.

The myth that you are either good at math or you aren't discourages girls, says a Stanford professor

I’m a mom of two and wanted to see if I was saying something to my daughters that I shouldn’t be.

In a post for the online platform Medium, Nicole Bryan, a vice president of product management for a technology firm, wrote that she started thinking about the messaging we give to our daughters about math after she volunteered to help with math enrichment at her daughter’s school. She was surprised to learn only two of the eight kids in her daughter’s fourth grade class identified as having a significant aptitude for math were girls.

When she asked friends who were raised in India if the ratio there was pretty much even in advanced math classes, they said it was.

How to teach girls to be confident #LikeAGirl

While Bryan said in her family there was “absolute insistence” that she be as good at math as her brother, she remembers subtle messages suggesting otherwise, such as her mom deferring to her dad when it came to math, but not when it came to reading or writing.

“When I see only 25 percent of an advanced math class comprised of girls, I begin to question if things have really changed enough,” she wrote.

Are we parents, both mothers and fathers, doing enough to keep our girls in math?

I’ve been thinking about this a lot lately, as a mother of two girls, ages 8 and 10, who are both good at math, but rarely name it as one of their favorite subjects.

We know how important it is to get more girls interested in STEM – science, technology, engineering and math – to not only provide them with innovative and well-paying career opportunities in a highly competitive world, but to also bring diversity to those fields.

One big reason why more women aren’t lining up to enter STEM fields and become engineers and scientists is math, said Jo Boaler, a professor of mathematics education at Stanford.

Jo Boaler is a professor of mathematics education at Stanford.
Robert Houser

“I can’t tell you how many women, undergraduates at Stanford and others I’ve spoken to, said to me, ‘I was going to go into science, engineering, whatever, but I didn’t because of math,’” said Boaler during an interview.

Part of the reason is the messaging that they get at school and home, said Boaler. “Many parents believe you can either do math or you can’t and they’ll say to their kids, ‘Oh, you’ve got the math gene.’ Or they tell them they don’t have it,” she said.

“We know that when mothers tell their daughters ‘I wasn’t good at math in school,’ their daughter’s achievement goes down,” she said.

Bryan, who has two kids, a 10-year-old daughter and 12-year-old son, believes that a lot of women don’t realize the messages they are sending their daughters. After reading her post, one mom told her, “Guilty as charged. I’m doing things differently with girl #2.”

Even if you don’t actually understand your children’s math homework, Bryan suggests you guide your kids to resources to help them. “It’s not that you can’t say ‘Hey, let’s work through this together’ … and solve it as a team. Just never start with ‘I’m no good at it.’ That is a very different message than ‘Hey, let’s figure this out together.’”

But this “widespread myth of the math person” extends far beyond the home and into classrooms across the country, said Boaler.

I’m sure many of you reading this story have either been told math was for you or it wasn’t.

How you can be good at math, and other surprising facts about learning | Jo Boaler | TEDxStanford 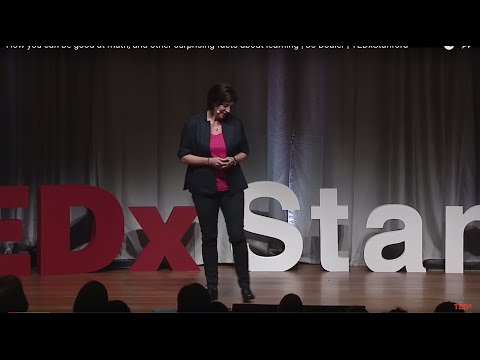 If you are a woman and you struggled with math while growing up, you probably came across a teacher at some point who told you not to worry, that math wasn’t for you and that English was your subject.

“I taught Stanford young women, and many other women as well, who said to me that they were on a math pathway until one teacher … told them math wasn’t for them and that just switched their whole career ideas,” she said.

The way we teach math puts off girls

Messaging alone though won’t change the gender gap in math. What’s also needed is a fundamental change in the way we teach the subject, said Boaler, who co-founded the non-profit organization youcubed, which aims to inspire, educate and teach teachers how to teach math.

“Math is taught in such a dry, procedural, abstract way,” said Boaler. “Unfortunately though, that dry, procedural math particularly puts off girls and we know that girls, for whatever reason more than boys, want a connected subject. They want to see the connections not only between math and the world and life, but they want to see the connections within math as well. They want to see math as this connected, conceptual subject, which is the subject it really is. But it’s not taught in that way and that is a big part of the problem.”

She gives a very straightforward example: A teacher asks students to figure out the area of an 8 x 3 rectangle. In that case, it’s a calculation with one answer. But, if the teacher wanted to make the problem more conceptual and the exercise more inquiry-based, the teacher could ask students to figure out how many rectangles they can find with an area of 24. (Check out this new video from Boaler to get a sense of how teachers can move math beyond memorization.)

#ClothesWithoutLimits: Fed-up moms create their own clothing for girls

“Suddenly, the kids’ eyes will light up because they’re having to make choices,” said Boaler, author of “Mathematical Mindsets: Unleashing Students’ Potential through Creative Math, Inspiring Messages and Innovative Teaching.” “They’re thinking about the dimensions and how the length and width relate to each other. They’re coming up with a whole variety of different ways of thinking about it.”

Another big issue in the teaching of math is that the subject has been set up as one that values speed, said Boaler. Timed tests – such as how many facts can you solve in three minutes – lead to math anxiety in classrooms and a general sense that speed is what is most important.

“With the emphasis on speed, we turn away those slow, deep thinkers, many of whom are girls, and those are the kids we want to go to high levels in math,” she said. “We put them off math from an early age by presenting it as a sort of shallow speed-based subject.”

In one of the courses she teaches at Stanford, Boaler says she has many “math traumatized students,” many of whom are women. When asking them what caused them to be so traumatized about math, “they will pinpoint the moment, usually between second or third grade, when they started doing timed tests and some of them will say I just wasn’t a good memorizer and we know that good memorizers don’t have more math potential.”

‘We know what works’

Last summer, Boaler and her colleagues convened a summer camp at Stanford. The goal was to test out the impact of new teaching methods and messages that anyone can learn math.

Eighty-one kids from disadvantaged backgrounds came together for an 18-day summer camp. The incoming seventh graders were taught open, creative math lessons and were told there is no such thing as a math person and how everyone’s brains can grow and change. Every one of the kids, no matter their achievement level, came in saying they were not a math person, said Boaler.

After the 18 days, they improved their test scores by the equivalent of 1.6 years in schooling, she said.

“We know how to do it well. We know the extensive research evidence. We know what works, but it’s not happening in schools and classrooms. That’s why it’s so important to get evidence out to teachers and to parents.”

At youcubed, Boaler and her colleagues provide resources and lessons to teachers, parents and students. One of their online classes focuses on how everyone’s brain grows and changes, how believing in yourself actually changes the way your brain operates and how stereotypes about girls and math just aren’t supported by the research.

Boaler and her colleagues worked with middle school math teachers to study the effectiveness of that online class. Students in one of the classes saw the online course at youcubed, while students in the other class did not. Everything else – the teaching and messaging – was the same.

At the end of the year, they analyzed the kids’ test performances. The students who took the online course did significantly better in all aspects of the Common Core assessments, and they also scored higher grade point averages in math, science and English – just from taking that online course.

“It just shows you again that when you change kids’ beliefs, that changes everything.”

How do you think we can keep more girls in math? Share your thoughts with Kelly Wallace on Twitter @kellywallacetv.