It’s a familiar scene: Syria Civil Defence, also known as the “White Helmets,” rushing to rescue a man covered in rubble, but unlike thousands of other videos from Aleppo, this one is staged.

The short video – a take on the Mannequin Challenge – was created by the Revolutionary Forces of Syria (RFS), an opposition media group, to draw attention to the crisis amid a renewed aerial assault on the besieged city. 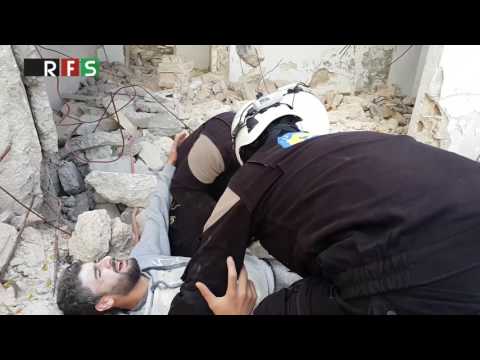 An RFS spokesperson told CNN the group wanted to use the hashtag to “reach the western audience” and “show them part of the Syrian suffering.”

The nearly one-minute long video has been the subject of criticism on social media. On Wednesday Syria Civil Defence released a statement calling it an “error of judgment”.

“This video and the related posts were recorded by RFS media with Syria Civil Defence volunteers, who hoped to create a connection between the horror of Syria and the outside world using the viral ‘Mannequin challenge.’ This was an error of judgment, and we apologize on behalf of the volunteers involved,” the statement read.

Syria Civil Defence was recently nominated for a Nobel Peace Prize for its work rescuing thousands of people since the Syrian conflict began over five years ago.

RFS also issued a statement of clarification on Wednesday in relation to the footage, saying that the video was used by the regime to “distort facts and twist perceptions.”

Meanwhile, Russian media, such as RT, said the footage raised doubts about the White Helmets’ other rescue videos.

Syrian President Bashar al-Assad has previously claimed that the video of five-year-old Omran Daqneesh, who was pulled from the rubble after an airstrike in August, was faked.

In an interview with the Swiss SRF 1 TV channel, President Assad alleged that the viral photograph was “forged” by the rescue group.

It is not the first time that activists in Syria have used a viral sensation to elevate their message. During the summer, RFS released a series of images showing Syrian children holding pictures of Pokemon characters with the words: “Save me, I am in Syria.”

Syrian media activist group SMO Syria posted a video in August 2014 with its own take on the Ice Bucket Challenge, a global campaign aimed at raising awareness about the disease ALS.

In the video, a young man challenges celebrities in the Arab world to experience their suffering before pouring a bucket of sand over his head.