A heartbreaking video has surfaced on social media showing the moment Brazilian soccer player Tiago da Rocha Vieira Alves found out he was going to be a father, a week before he died in Tuesday’s plane crash in Colombia.

The video shows him embracing his fellow players and celebrating, later rocking his arms back and forth as if cradling a baby.

Tiaguinho was among 71 people killed when a charter plane carrying 77 passengers, including members of the Chapecoense team, crashed near Medellin. Six passengers survived. 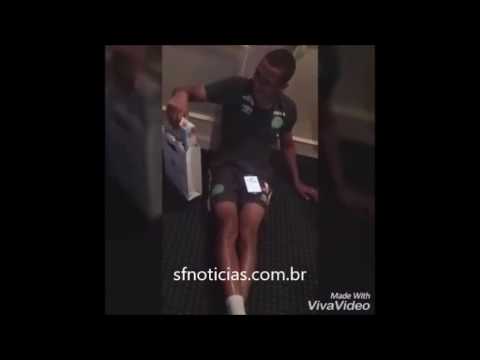 Chapecoense was due to play the Colombian club team Atletico Nacional in the first leg of the Copa Sudamericana finals on Wednesday.

Tiaguinho, a striker on the team, scored the second goal in the semi-final match against São Paulo last week, securing the victory that led Chapecoense to the finals.

‘He always wanted to be a young father’

“His wife’s pregnancy is a small miracle. It is a small part of Tiaguinho that stays behind with us. We are thankful,” Marins said, adding that his wife, Graziele, is just over a month pregnant.

The couple were less than two weeks away from celebrating their one-year anniversary – they were married on December 12, 2015.

“He always wanted to be a young father … so I am happy that he got to have that last joy,” Marins said.

Marins described her cousin as an “incredibly caring” person.

He always wanted to be a young father… so I am happy that he got to have that last joy,

“He was wonderful – an excellent player, who never forgot about his family,” Marins said. “He was always calling the family, and making sure they were okay. Even though he was far away, he called his mother almost every day.”

“His mother still cannot believe what happened. She is still waiting for him to be alive,” Marins said. “But his death has been confirmed, so we are just awaiting the arrival of the body. That is all we can do now. Wait for him to come home.”

Karla Pequenino contributed to this report