“The View” host on Thursday extended an invite to Trump to sit with her at an upcoming fashion show after reports that the First Daughter was shunned by some in the fashion community at a NYFW event.

One picture circulating showed two empty seats next to Trump as she sat at the Phillipp Plein show on Wednesday. 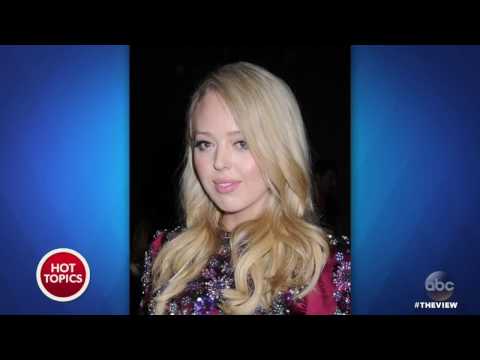 “You know what, Tiffany, I’m supposed to go to a couple more shows. I don’t know what’s going to happen, but I’m coming to sit with you,”Goldberg said on “The View.” “Because nobody’s talking politics. You’re looking at fashion. She doesn’t want to talk about her dad. She’s looking at the fashion.”

Thank you @WhoopiGoldberg I'd love to sit with you too! 😊

The reports of Trump’s snub stem from tweets sent from fashion editors and writers in attendance.

“Nobody wants to sit next to Tiffany Trump at Philipp Plein, so they moved and the seats by her are empty,” former Wall Street Journal columnist Christina Binkley wrote on her social media account, accompanied by a photo of Trump.

Binkley later clarified to CNN that Trump was with “several friends” and the unoccupied seats next to her were soon filled.

“Two young women seated on her left said they didn’t want to be seated beside her, and they left to find seats elsewhere,” Binkley told CNN in an email. “I saw it as a newsworthy example of tensions arising over the Trump family, tweeted a photo, and thought I might write about it later. But within a minute or two, a well-known creative director and a friend sat in the seats.”

Goldberg also cited tweets from Nikki Ogunnaike, a senior fashion editor at Elle, but the journalist’s account has since been protected.

Trump ended up watching the show seated next to Plein’s sister and girlfriend, Binkley said.