Sea lion grabs girl and pulls her into water

Witness says her family was feeding the animal before the incident

Some tourists in British Columbia got a bit of a scare when a sea lion grabbed a little girl and dragged her into the water.

Michael Fujiwara was sitting on a dock at the Steveston Fisherman’s Wharf in Richmond, British Columbia on Saturday, when the California sea lion popped its head out of the water.

He says the animal attracted a lot of attention and the girl and her family came to the edge of the dock.

“Her family started feeding the animal and the sea lion started to become comfortable,” Fujiwara said. In the video, you can hear people laughing and whistling at sea lion and holding their hands over the water, as if they were holding a treat. 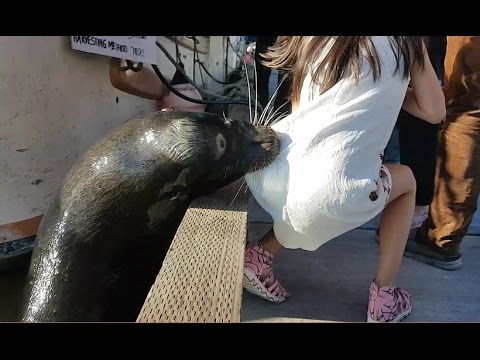 At one point, the sea lion lunges within inches of the little girl’s face. It seems like a friendly move, and the girl cackles with delight.

That glee turns to terror a few seconds later, when the seal lunges again – grabbing the girl and yanking her backwards into the water.

A man, who Fujiwara thinks was a relative, jumps in after her and bystanders pull them to safety.

HOMESTEAD, FL - MAY 19: Honeybees are seen at the J & P Apiary and Gentzel's Bees, Honey and Pollination Company on May 19, 2015 in Homestead, Florida. U.S. President Barack Obama's administration announced May 19, that the government would provide money for more bee habitat as well as research into ways to protect bees from disease and pesticides to reduce the honeybee colony losses that have reached alarming rates. (Photo by Joe Raedle/Getty Images)
Joe Raedle/Getty Images

You're worried about the wrong animal attack

“After being pulled back onto the dock, the family quickly walked away from the area without saying much,” Fujiwara said. “They were probably very shaken up and just wanted to get away from the sea lion as fast as possible.”

Bob Baziuk, the general manager of the Steveston Harbour Authority, told CNN that the girl and her rescuer were not hurt, and that he is trying to get more information about the incident.

He says the harbor is on the sea lions’ migratory route and that males sometimes swim into the area looking for free food.

Baziuk says that they’ve been warning visitors not to feed the animals for years.

“It’s not Sea World, it’s a place where you buy fish,” Baziuk said. “If you feed the animals like this you’re asking for trouble.