The A-list star famously backs causes that preserve the environment

Brad Pitt can now add weatherman to his resume.

The actor earlier this week made a surprise appearance on Comedy Central’s “The Jim Jefferies Show” and poked fun of President Trump’s decision to withdraw the United States from the Paris Agreement last week.

“The world is still grappling with Trump withdrawing from the Paris accord we wanted to address it one more time before we say goodnight,” Jefferies said on Tuesday’s show. “To help us understand climate change and what it means to the world, here’s our own Jim Jefferies Show weatherman.”

How It's Looking Out There (ft. Brad Pitt) - The Jim Jefferies Show 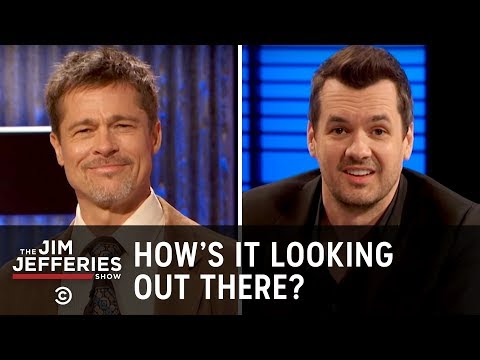 Pitt stood in front of red hot map of the world and delivered a pretty depressing weather report.

“Thank you, Jim. So things are going to be getting warmer in this area here,” Pitt said while gesturing to the map which is dotted by bright yellow suns. “And this area here.”

When asked by Jeffries if Pitt had any “future forecasts” Pitt simply responded: “There is no future.”

Despite the bleak forecast, Pitt makes one charming weatherman.

Pitt famously backs a variety of humanitarian causes, one of which includes efforts to preserve the environment. His Make It Right Foundation was established in 2007 to help New Orleans rebuild environmentally sustainable homes after the city’s Lower 9th Ward was wrecked by Hurricane Katrina.