‘Putin Interviews’ as much about Oliver Stone as Russian leader

Based on the first half of “The Putin Interviews,” Showtime’s four-hour event tells us as much about Oliver Stone as it does Vladimir Putin. In the process, Stone’s earnestness opens the director to charges of being turned into a useful public-relations tool fort he Russian leader.

This shouldn’t really come as a surprise. Like other celebrities who have dabbled in journalism – think Sean Penn’s interview with the Mexican drug lord El Chapo – Stone invites criticism as much by what he fails to ask, or follow up on, as what he does.

While there’s value in this attempt to hear from Putin on his terms – and even humanize an often-demonized figure – Stone’s idle chitchat and solicitous tone will surely leave many journalists and Putin critics gnashing their teeth.

The filmmaker famously associated with conspiracy-minded movies (“JFK,” “Nixon”) recently directed “Snowden,” about whistle-blower Edward Snowden. In so doing he spent time in Russia, sitting for several interviews with its president, with the opening hours featuring portions of talks conducted from July 2015 to as recently as February. 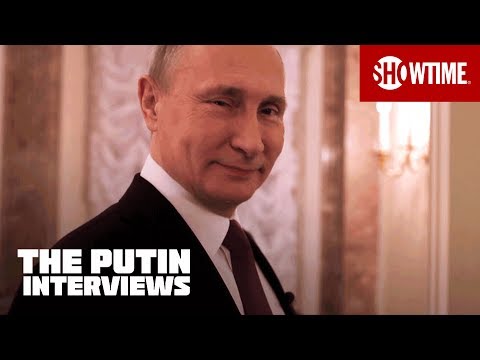 To be fair, Showtime made only the first two parts available, and promos indicate Stone did question Putin about allegedly hacking the U.S. election. (Megyn Kelly beat him to the punch on that, at least in TV chronology, and was met with a lot of steadfast denials.)

Still, the topic isn’t broached in these hours, as Putin holds forth about how democratic Russia is and not-so-subtly badmouths Soviet reformer Mikhail Gorbachev, without being pressed or fact-checked much on matters like Russia’s propaganda law aimed at gays or his treatment of political foes.

Putin blames the U.S. for the rise of al-Qaeda and Osama bin Laden and accuses the government of seeking to “destabilize the political situation in Russia.” As for the NATO alliance, the Russian leader says the U.S. “has no allies, it has only vassals.”

Stone is largely content to listen, but does offer leading questions, telling Putin the U.S.’ strategic goal is to “destroy the Russian economy.” Long before the election, he also labels then-presumed nominee Hillary Clinton a neocon, issuing a familiar lament that militarism characterizes both major parties.

Given Putin’s reported animus toward Clinton, that passage lingers. So do his statements that “I believe nothing is going to change no matter who gets elected” and “We’ve never interfered with the domestic affairs of other countries.”

Other moments (Showtime’s calling it a documentary, which isn’t quite right) border on the surreal. Stone, for example, alludes to “Dr. Strangelove,” Stanley Kubrick’s 1964 satire about nuclear Armageddon, which Putin has never seen. The leader subsequently indulges the director by watching it with him, which is shown, then discusses it afterward.

The two also talk at a hockey rink, where Putin is outfitted in full pads, as Stone watches him play a game he took up at age 60. Turning to family, Stone asks, “Do you like your grandchildren?” Putin says he does but admits he doesn’t have much time to play with them.

Putin’s attempts at humor are also either lame or lost in translation, such as when Stone mentions having to endure bad days. “I’m not a woman so I don’t have bad days,” he says, awkwardly explaining that he’s referring to “natural cycles” that women experience.

Stone appears to see “The Putin Interviews” as a means of building a bridge, providing better understanding of this fascinating world figure outside the filter of traditional news.

“We’ll improvise,” Stone says at the beginning as the two sit down. “No rules about this.”

Alas, however charitable one might feel about his intentions, this was a case where a few clear rules were surely in order.