Mayweather putting 49-0 record on the line

How important is a television show’s finale? Perceived wisdom is that for a TV series to go down in cultural folklore it needs to “stick the landing” to ensure its place in immortality, though others argue that “it really is about the journey, not the destination.”

Which brings us to an event that is taking place on August 26, and will be witnessed in person by roughly 20,000 people, but many more around the world thanks to pay-per-view TV: the megafight between undefeated boxer Floyd Mayweather and MMA icon Conor McGregor.

Even before the hype machine fully got going, it never seemed as though it was the destination – for the record it’s the T-Mobile Arena in Las Vegas – but rather the journey that has been at the heart of what is ultimately going to make two men even wealthier than perhaps even they could ever have imagined.

Every major fight is traditionally accompanied by bags of trash talking and Messrs. Mayweather and McGregor haven’t disappointed – calling each other out, in an attempt to promote themselves to the tune of hundreds of millions of dollars, their own chances of winning, as well as the fight itself (arguably in that order).

Less talked about is the two-year-old elephant in the room – the underwhelming fight which took place in May 2015 between Mayweather and Manny Pacquiao.

Then the two best fighters of their generation effectively danced around each other for 12 distinctly dull rounds, that ended in a unanimous points victory for the American over his Philippine opponent.

“Two years ago, you had Mayweather-Pacquiao and it was a boring fight,” boxing great turned promoter Oscar De La Hoya told CNN Sport.

“It was a fight that had a lot of people thinking “Wow, this is it? This is boxing?” And so McGregor and Mayweather will be a farce … it’ll be one of those 12 round snoozers.

“Mayweather is the best boxer in our generation, and he knows what he’s doing, he knows how to box. I do not knock that whatsoever. I actually respect him for that. But to make people watch a 12 round snoozer is not good for boxing.”

“When two people get in, whether it’s a ring or an Octagon, and start throwing punches, nobody knows what’s going to happen. Anything is possible.”

Recounting how this fight finally came about, White maintains the momentum was simply unstoppable.

“This is some weird thing that took a life of its own, and became the most talked about thing on the planet,” says the UFC president.

“Floyd Mayweather’s team was saying no matter where they go, it’s the only question they were ever asked.

“No matter where I went, the only question people would ever ask me is: ‘When are Floyd and Conor going to fight?’

“So as this thing continued to grow, I said: ‘You know what? Conor wants it, he [Floyd] wants it and, apparently, everybody else wants it, let’s do it.’”

‘The impossible deal just got made’

Equally unsurprisingly White’s well-rehearsed talking points are mirrored by his counterpart on Mayweather’s side.

When it is put to Ellerbe that many are predicting Mayweather-Pacquiao II, he smiles before responding: “Floyd will dictate everything that happens and I’m expecting a knockout in the fight.

“This is the fight the fans demanded and it’s exactly what Floyd is going to give them. The fans are the winners.”

However, training footage of McGregor sparring is unlikely to give Mayweather any nightmares as he begins to prepare for the fight.

Even White concedes that “the question is: Can Conor McGregor hit Floyd Mayweather in a 12 round fight?”

White consoles himself by adding: “We believe this will be the biggest fight ever in the history of two people throwing punches.”

(SAVAGERY) MCGREGOR SPARRING OPPONENT LIGHTS HIM UP WITH COMBOS: "I AIN'T FLOYD AND I LANDED" 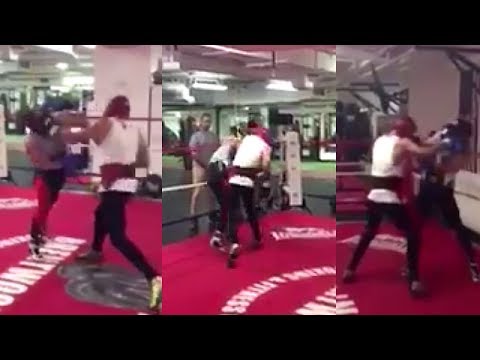 By his own admission, De La Hoya has skin in the boxing game by promoting the Saul “Canelo” Alvarez Canelo-Gennady Golovkin fight, which takes place in Vegas in September and could potentially suffer in PPV sales if Mayweather-McGregor is a dud.

“You’re going to ask McGregor to go inside a boxing ring, where he has no experience whatsoever,” says De La Hoya.

“He’s never laced up a glove. I call it a circus, I don’t think it’s fair for the sport of boxing.”

Asked if he has any advice for the Irishman, the 44-year-old De La Hoya goes into overdrive.

“What he needs to know is that I started boxing at five years old. I’m an Olympic gold medalist. I’m a 10-time world champion in six different weight classes.

“Yes, I was a bit older when I faced Mayweather but even I couldn’t beat him. So what makes McGregor think that he can go in there, in his very first professional fight, having really no experience in the professional ranks and beat Mayweather?

“It’s kind of far-fetched. I would tell McGregor that it’s the fight you don’t want to take your first time around. This is obviously all about money.

“This is all about just creating the hype around this event that potentially can damage the sport of boxing once again like Mayweather-Pacquiao did.”

If the fight is a let-down, it’s not as if boxing fans weren’t given guidance. The legendary former welterweight boxing champion, “Sugar” Ray Leonard, had but one word of warning for McGregor: “Duck.”

But the naysayers may not make much of an impact on the bottom line, with estimated PPV buys in the range of four to five million.

The world waits to see whether the fight is a classic or a clunker. Will the contest “stick the landing?”

Until the opening bell sounds, nobody knows for sure. In TV terms, it’s what they call a cliffhanger.