From the lakeside town of Nantua to the city of Chambéry, collarbones were fractured, kneecaps were dislocated and lungs were punctured.

It’s supposed to be a bike race, but by the end of Sunday, stage nine of the 104th Tour de France felt more like an episode of a TV hospital drama.

After 181.5 kilometers, three hors categorie climbs and no shortage of devilishly difficult descents, 11 riders were left by wayside – five through serious injury. 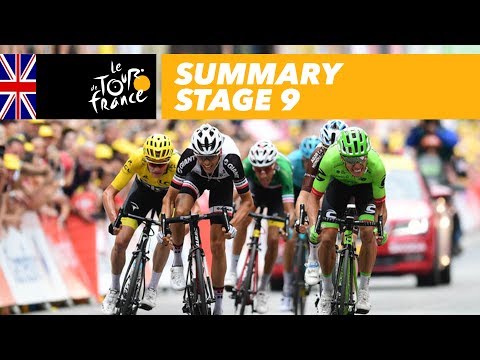 Chief among them were Team Sky’s Geraint Thomas and overall contender Richie Porte, prompting commentators to brand it one of the most formidable climbing stages in recent history, and one rider to suggest “organizers got what they wanted.”

Colombia’s Rigoberto Uran (Cannodale-Drapac) took the stage in a photo finish from Warren Barguil (Sunweb) by a tire’s width after a six-man sprint – turning the Frenchman’s tears of joy to tears of sorrow.

"I thought that I had won," said second-placed Barguil, disconsolate after the photo finish. "It's hard but that's sport."
LIONEL BONAVENTURE/AFP/AFP/Getty Images

Chris Froome, now without his chief lieutenant Thomas for the rest of the Tour, retains the yellow jersey having finished third.

But once again, as in Mark Cavendish’s stage four horror crash, it’s the riders that didn’t cross the line who will dominate the headlines.

READ: Around the world in 80 days – on a bicycle

READ: Chapel that’s a shrine to cycling’s fallen and heroes

Thomas, second overall behind teammate Froome at the start of play Sunday, was the first major name to fall – breaking his collarbone on the tough Col de la Biche descent in a crash Dave Brailsford branded “devastating.”

“He had the crash in the Giro, then the roller coaster of coming here and being in yellow after winning the first stage, and then breaking his collarbone today,” said the Team Sky general manager.

“We’ll get our arms around him and make sure he’s all right; we’ll get him back on track but that’s not nice to see.”

If Thomas’s crash had been difficult to watch, Porte’s crash just under 100km later was too much for some TV viewers, including Cavendish.

Haven't watched today's stage and 100% won't be after reading some of my mates have been hurt. Really hope all who crashed today are ok.

Flying high above the town of Aix-les-Bans in slippery conditions, Australian Porte was traveling at speeds in excess of 70kph (45mph) when he veered onto the grass and off the road.

As his bike threatened to tumble down the mountain, Porte hit the tarmac hard, skidding across the width of the road before clattering into the jagged rock face on his right.

There was nowhere to go for Daniel Martin behind him, who somersaulted over Porte’s body, then “bounced,” but was somehow was able to get back on his bike and continue the descent.

The Irishman – crashing once again in a later incident but “remarkably” doing enough to still claim ninth position in Sunday’s stage – is sixth overall, one minute and 44 seconds behind Froome.

Crazy day on @LeTour Remarkably it seems I bounced well and I'm relatively ok. Sure to be sore tomorrow. Best wishes @richie_porte

“I guess the organizers got what they wanted,” reflected Martin after the race. “I don’t think anyone wanted to take risks there, but it was so slippery under the trees.

“Richie locked up his back wheel, went straight into the grass, just wiped out, and his bike just collected me.

“I was very lucky the first time; I got through but my luck run out.”

When a helmet makes the difference. #TDF2017 pic.twitter.com/dSaqSJuzvI

There was no getting up for Porte, who was placed in a neck brace, stretchered into an ambulance and straight to hospital – bloodied, bruised but still asking for his helmet and glasses.

Later diagnosis revealed a broken collarbone and a fractured pelvis, meaning “four to six weeks’ recovery, providing there are no complications,” according to BMC team doctor Max Testa.

Once you've seen that Richie Porte crash, it's hard to get it out of your mind. It was that bad.

Hospital food. Bon appetit! Thanks for all the messages, much appreciated. pic.twitter.com/lq164KuU4M

Tour de France organizers did not immediately respond to CNN’s request for comment on Martin’s criticisms, but British cyclist Chris Boardman, who has ridden the Tour, told ITV that Porte had chosen to descend at that speed.

Earlier on Sunday, Boardman had ridden the descent, tweeting: “Been down today’s final descent. In the wet. It was very hairy. Resurfacing has made it smoother … and very slippery …”

Been down today's final descent. In the wet. It was very hairy. Resurfacing has made it smoother...and very slippery...

Was stage nine of the 104th Tour de France too dangerous? Have your say on CNN Sport’s Facebook page

After three hors catégorie climbs Rigoberto Uran and Warren Barguil could only be separated by a photo finish.
Bryn Lennon/Getty Images Europe/Getty Images