Andrew Montgomery lost part of his leg in a motorcycle crash

Andrew Montgomery was a budding performer when he first saw the show “Le Rêve-The Dream” nine years ago in Las Vegas.

Physically demanding for performers, the show is artful and acrobatic and plays out in a pool of water with lifts instead of a stage.

In 2015, Montgomery got his chance. He saw a flyer for an audition in Los Angeles, where he was living, and seized the opportunity.

“We had auditioned close to 500 people when we saw him. And he was a jack of all trades,” said Louanne Madorma, “Le Rêve” casting director. “He had something really special from the beginning, and everybody knew that he was the guy I wanted.”

But four days after the audition, Montgomery’s life took a tragic turn.

“I was struck by a car on my motorcycle while riding home from work,” the 30-year-old recalled. “My foot actually got smashed between the car bumper and my motorcycle.”

He spent the next 2½ weeks in the hospital and had three surgeries to try to save his foot.

“My doctor has basically told me that amputation seems to be the best option,” Montgomery said in a video shot from his hospital bed. “I’m not ready to let go,” he added, holding back tears.

Chapter Two: What Happened to Me? 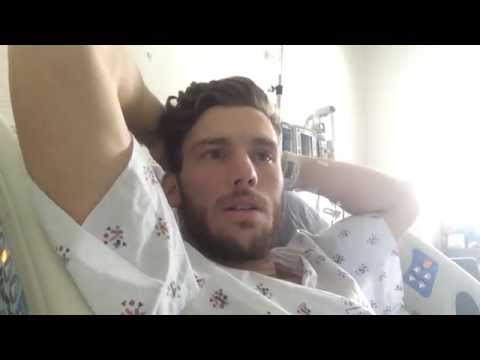 But eventually, his left leg was amputated below the knee.

“When you have any type of life-changing event like that, you’re left to evaluate where your life sits,” he said. “I thought, ‘There’s no way I could be in the show.’ “

After going home from the hospital, Montgomery gave himself a week to grieve.

“And then, from there on, I said, ‘there’s no looking back.’ And that’s when I started fighting.”

The day he got his first prosthesis, Montgomery was walking on his own. Three weeks later, he was walking up and down stairs, running and even dancing.

Lani Dickinson is a professional dancer, who was born without an left arm.
David Hodge and Hi-Jin Hodge

Dancer with one arm shows beauty has no bounds

“I immediately hit the gym as soon as I could. I was constantly focusing on balance and just building all of that strength,” he said.

Madorma reached out to Montgomery after hearing about his accident. When he stopped by the show to see a friend, the casting director told him, “As soon as you’re ready, if you can do what you did in the audition, you have a job.”

“He ran and did a round-off back handspring,” she said. “He progressed very quickly.”

It was eight months from the day he started walking again to the day he walked back into the audition room.

And then one day, he got the call to join the cast.

Curtis McDaniel is a model with vitiligo, a disorder that causes his skin to lose color.

Model with vitiligo redefines what it means to be beautiful

“It’s very physically demanding. We have people flying in and out. We’re hanging from the ceiling at 90 feet. We’ve got people swimming in and out of the water.”

He has four waterproof prosthetic legs designed by the Hanger Clinic that he uses in the show: one that fits inside shoes and boots, one for aerial work, one for acrobatics and a backup in case one breaks.

“Despite what you see on stage, there are a numerous set of challenges that I have to overcome. … I like to say that inside every prosthesis is a person who is making it look easy.”

Montgomery works as a male generalist, performing in multiple acts that involve dancing, swimming, aerial work and acrobatics. His goal is to blend in with the cast.

“If you walked away from this show and you had no idea that there was an amputee in the show, I have done my job. … I don’t think I can take for granted every second that I get to spend out on that stage, because there was a time when it never could have happened.”