Jordan Spieth’s childhood friends might have dubbed him a college dropout, but his decision to initially go to university to has proved hugely influential for wannabe golfers.

According to Golf Channel commentator Charlie Rymer, the US college game is “on fire” at the moment and that has a lot to do with Spieth.

Spieth was midway through his sophomore – second – year at the University of Texas when he decided to turn pro in December 2012 at the age of 19.

A two-time US Junior Amateur Champion and ranked No. 1 amateur in the world at the time, Spieth has never looked back.

Fast forward to 2017 and already Spieth has 11 PGA victories to his name, has won three of the four majors – something only he and Jack Nicklaus achieved before their 24th birthday – and accumulated more than $35 million in prize money, not to mention endorsements.

No doubt, there are future champions in this picture. #EastLakeCup pic.twitter.com/yhqd4FJmw8

This week’s three-day tournament in Atlanta sees 40 golfers – some of the best young men and women in the college game – do battle at the prestigious East Lake Golf Club, which is the home of the PGA season-ending TOUR Championship.

All three days are broadcast live on the Golf Channel and commentator Rymer believes that, thanks to Spieth, it is “very, very likely” that some of these Spieth wannabes will be competing and winning at the highest level of the game, sooner rather than later.

“There really has been a paradigm shift in the way young professionals coming out of college look at the game,” Rymer, who himself played on the PGA Tour and regularly represented Georgia Tech at East Lake during his college days, told CNN Sport ahead of the East Lake Cup in Atlanta.

“Jordan Spieth really changed all that. He came right out of the University of Texas and started winning immediately and now all the kids coming behind him are like: ‘I can do that.’”

Spieth secured his first major win at the 2015 Masters at the age of 21.
Ross Kinnaird/Getty Images North America/Getty Images

There is no shortage of youngsters wanting to emulate Spieth and the world of college golf is as competitive as it ever has been.

Not only do scholarships open up the possibility of making it as a professional golfer; they also provide a way of funding expensive bachelors degrees as well as allowing graduates to pursue careers in all walks of life.

However, it’s easier said than done to win a scholarship.

Children aiming to secure scholarships at American universities have to shoot consistently low scores, drive the ball over 250 yards, get their putting stats down and enter the right tournaments just to get noticed.

If that wasn’t enough, they need to get the academic grades as well.

It’s not just the college golfers who have been inspired by Spieth. Even his friend of nine years Justin Thomas, who turned pro a year later, credited him with opening the door and spurring him on to achieve what he did during an incredible 2017 season.

“It’s been a lot of me chasing him and his accomplishments so far,” Thomas told CNN just before last month’s TOUR Championship.

Longstanding friends Thomas and Spieth have competed against each other since they were 13.
Kevin C. Cox/Getty Images North America/Getty Images

“I feel like if I’m beating him in a tournament, I will then have a good chance to win. It keeps me working, it keeps me pushing to try beat him.”

Just a few days after that interview, Thomas went on to take the $10 million FedEx Cup bonus at the end of a season that yielded five victories including his first major title at the US PGA Championship.

He was named PGA Tour Player of the Year barely four years after leaving Alabama State and Rymer told CNN’s Don Riddell that type of success is hugely motivating for college golfers.

“They gave Thomas a check for $10 million, the kids were watching that, I’m sure of that,” said Rymer, 49, who won the US Junior Amateur Championship in 1985.

“It’s certainly something that’s having an impact in bringing kids to the game and also getting them ready to go out and play professional golf.”

It’s a production line that bodes well for US golf, which is already in very good shape. Dustin Johnson is world No. 1 with Spieth and Thomas close behind in second and third spot respectively.

The US won their seventh straight Presidents Cup in October.
Elsa/Getty Images

Brooks Koepka, the US Open Champion, and Rickie Fowler are also in the top 10 and this strength is evident in the international team competitions.

The US comfortably won their first Ryder Cup in six years at Hazeltine in 2016 and Steve Stricker’s Presidents Cup team destroyed the internationals at Liberty National in New Jersey, by 19 points to 11.

According to Rymer what makes Spieth stand out is his mental strength.

“Jordan thinks as well as any athlete I’ve ever seen in any sport. We’ve seen him win major championships when he clearly didn’t have his A-game,” says Rymer, referring to the 2017 Open where, after blowing a three-shot overnight lead, Spieth became the only player in history to play the last five holes of a major five-under par to secure the Claret Jug.

“He just believes in himself as much as I’ve ever seen anyone believe in themselves and when a challenge comes along, it doesn’t bother him. He looks at a challenge as ‘let me show you how good I am,’ and he goes out and gets it done.

So who will be the next college golfer to emulate Spieth and Thomas and go on to win major titles at the senior level?

Congratulations to Will Gordon of Vanderbilt University for winning the #EastLakeCup Men’s Individual Title. pic.twitter.com/bZaBeOV3IZ

If day one of the East Lake Cup is anything to go by, you should keep an eye on Vanderbilt’s Will Gordon and the University of Southern California’s Robynn Ree, who took the men’s and women’s individual stroke play titles respectively ahead of the team match play tournaments.

Oregon sophomore Norman Xiong, 18, is also being talked up as a future star of the game after winning the Western Amateur title in August – the third oldest amateur championship in golf, which boasts past winners such as Tiger Woods, Jack Nicklaus and Phil Mickelson.

Xiong, who was born in Guam and raised in Southern California, was the first Oregon player to win the Western since it was founded in 1899 and was part of the victorious 2017 US Walker Cup team. He is currently the sixth ranked amateur in the world.

Brad Dalke committed to play for Oklahoma at just 12 years old. He’s 20 now and perhaps most famous for beating Rory McIlroy in an arm-wrestle but his runner-up finish at the US Amateur earned him a place at both the 2017 Masters and US Open, though he didn’t make the cut in either.

Illinois’ Nick Hardy, 21, caught the eye with a 52nd place finish at the 2015 US Open, while his college teammate Dylan Meyer, despite being hospitalized in May this year with ulcerative colitis, held his own amongst the seniors at the John Deere Classic, missing the cut by just two shots. 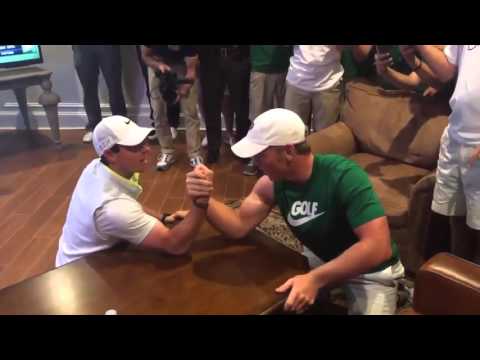 The women’s line up in Atlanta is no less impressive.

Ree finished two shots clear of a talented field which includes three of the world’s top 10 amateurs in Stanford duo Albane Valenzuela (No. 3) and Andrea Lee (No. 5) and Arizona State’s Swedish player Linnea Strom (No. 9).

This could be Ree’s final event at college level. She’s finished in the top-10 at every tournament she’s played in this year and is entered in the final stage of the LPGA Q-School, where a top-20 placing would secure her card on the professional circuit for next season.

Valenzuela, 19, is already Switzerland’s top ranked golfer – she represented her country at the 2016 Rio Olympics and made the cut at the US Open of the same year.

Los Angeles born Andrea Lee, 18, is currently the best ranked player under 20 in the US and was the first Stanford player to be named the NCAA’s women’s golf Freshman of the Year.

Stanford's Andrea Lee competed for the US in the 2016 Walker Cup.
Kevin C. Cox/Getty Images

The East Lake Cup – now in its third year – shifts to the team match play event on days two and three.

Vanderbilt’s strong showing in the men’s stroke play has earned them top seeding and a semifinal showdown with Oregon; with defending champions Oklahoma up against Illinois in the other. It’s Stanford against Arizona in the women’s event and Northwestern against Southern California.

All the action will be broadcast live on television and commentator Rymer believes that is also a factor as to why these players are not fazed by the cameras when they finally make it on to the senior tour.

“We didn’t have this opportunity when I played college golf, to come out and play on TV,” said Rymer in an interview on the Golf Channel.

“I think it might be one of the reasons why today, when the girls get to the LPGA Tour and the guys get to the PGA Tour, they are going out and doing amazing things.

“They’re not having to worry about getting comfortable in front of the cameras.”