New Zealand Prime Minister Jacinda Ardern and her partner Clarke Gayford have revealed the name of their baby girl, who was born Thursday.

Ardern is the first world leader in nearly 30 years to have a child while in office.

This morning PM @jacindaardern and @NZClarke introduced their new baby Neve Te Aroha Ardern Gayford to the world, and @claire_ef got some lovely photos of the occasion.

“Neve” (pronounced like leave) means radiant, light or snow and “Te Aroha” (TAY AH-row-ha) means love and is also the name of the mountain and town near where Ardern lived as a child.

The baby will be known as Neve Gayford for short.

Ardern said like many parents she and Gayford had struggled to settle on a name before the birth and had a shortlist prepared. 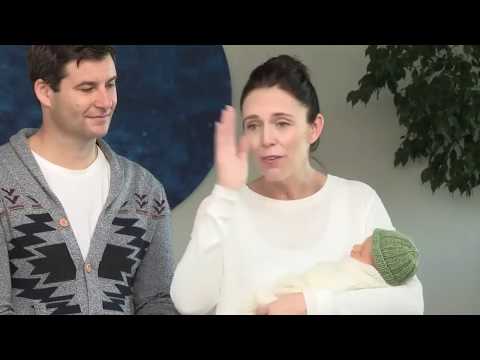 “We wanted to wait until the baby arrived to really see which one felt like it worked, we chose Neve because we just liked it and when we met her we thought she looked she suited the name,” the Prime Minister said. “Also, it means – in various forms – it means bright and radiant, and snow which seemed like a good combination for Matariki (the Maori New Year) and for solstice.”

However the couple chose “Te Aroha” quite quickly, as it reflected the love their baby had been shown before her birth, she said.

“All of the names that were gifted along the way, I thought how do I reflect the generosity, particularly from all the iwi (Maori tribes) who gifted us names and Te Aroha seemed to me to be a way we could show that love and generosity,” Ardern explained.

“It’s also the place where all my family are from as well as a place name and I grew up under that mountain.”

Ardern said the family was doing well – but, as is common with new parents the world over, were sleep-deprived.

Gayford said he would never forget the look on Ardern’s face when she held their baby.

Ardern is taking six weeks parental leave before Gayford – who hosts a fishing documentary series – takes on the role of stay-at-home dad.

Tweeting her congratulations to Ardern and Gayford earlier in the week, former NZ Prime Minister Helen Clark said their parenting arrangements were gender-equality in action. “This is 21st C NZ,” Clark said “#ProudKiwi”.

Addressing media Sunday, Ardern acknowledged the situation was viewed as somewhat novel but that she hoped one day it would be generally accepted that men and women could make such choices.

“Clark’s been as much of a role model here as I am and that’s been something that I’ve heard a lot of people talk about, too – and it’s true.

“So I hope for little girls and boys that there’s a future where they can make choices about how they raise their family and what kind of career they have, that are just based on what they want and what makes them happy,” she said.

Ardern also posted a video on her Facebook account Sunday, thanking hospital staff and well-wishers, showing her room in the maternity ward and introducing Neve.

She also got in a dig at Gayford for his thrift-shop “Dad cardie,” saying it had “just been waiting for this moment.” Gayford sported the cardigan during their official press conference.

As we head home we just wanted to say thanks, from the bottom of our hearts.

“Thank you so much for your best wishes and your kindness. We’re all doing really well thanks to the wonderful team at Auckland City Hospital,” she said in her post.

A later post thanked her midwife for providing her with a meal of macaroni and cheese.

Ardern became her party’s youngest leader and New Zealand’s youngest in 150 years after defeating former Prime Minister Bill English in last October’s election. It marked the first victory for the Labour Party in nine years. She led the group for three months before being elected Prime Minister.

Deputy Prime Minister Winston Peters is filling in for Ardern while she is on parental leave.